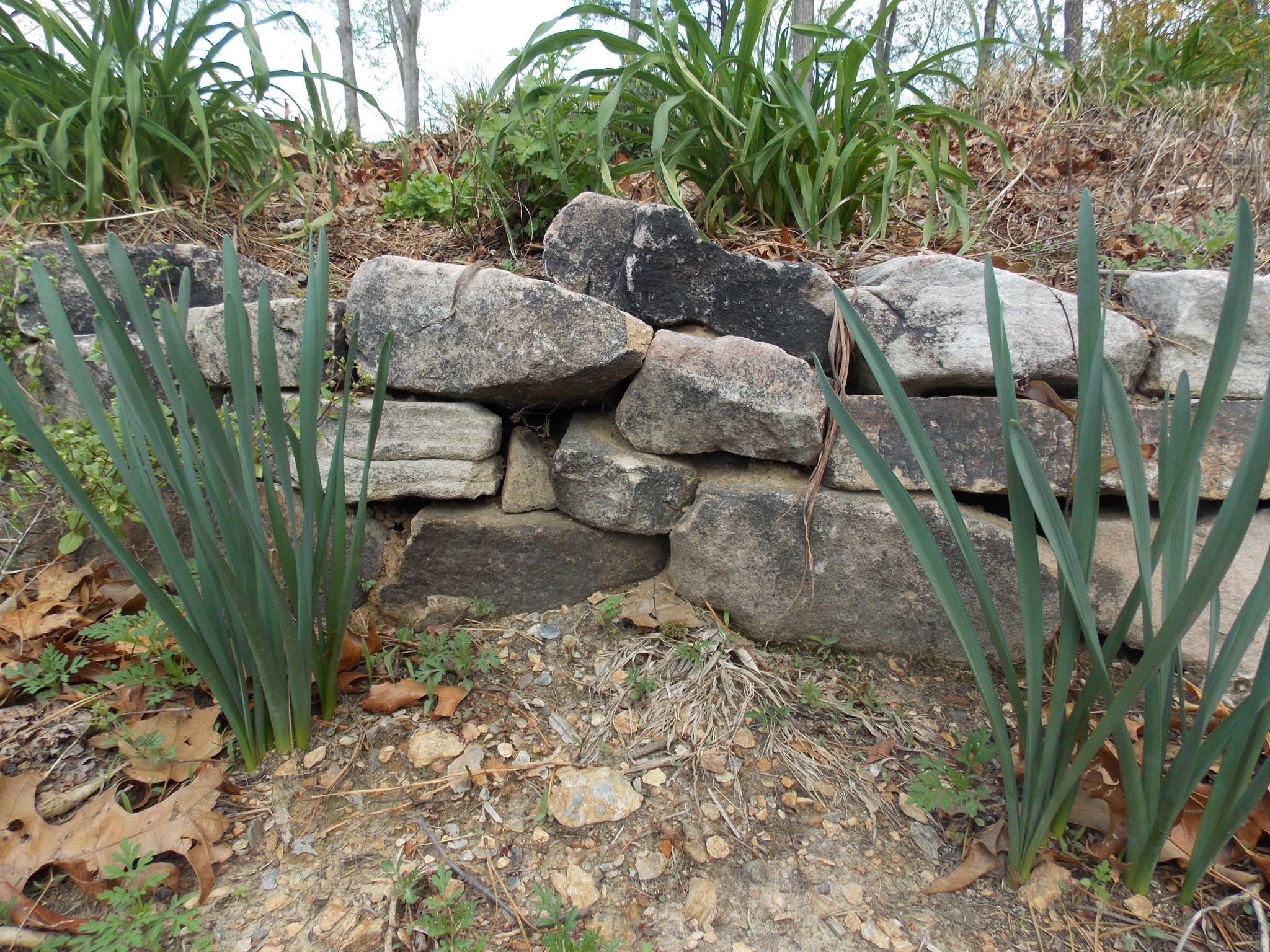 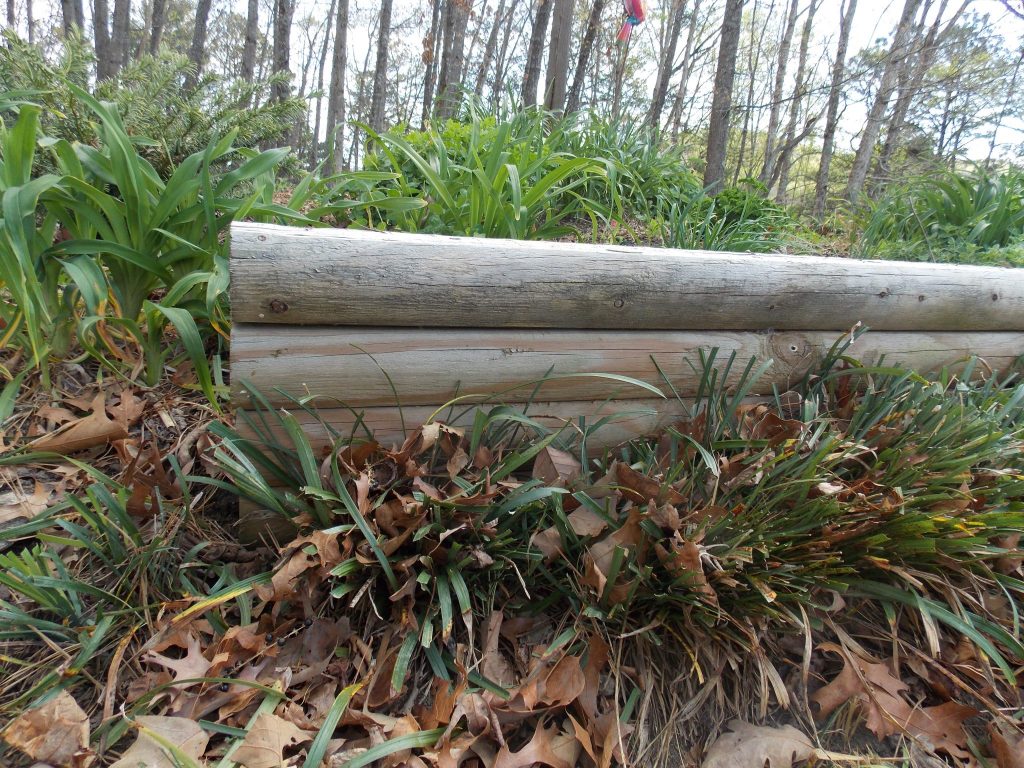 April in North Carolina is still too soon for planting herbs, but not for getting a new planting bed ready. A few years ago I took a landscaping shortcut, the kind that always comes back to haunt you, by building this low retaining wall for our first herb garden out of pine landscaping timbers. They were fast and cheap, but like everything fast and cheap they not only didn’t look good — or natural — they soon began to rot. 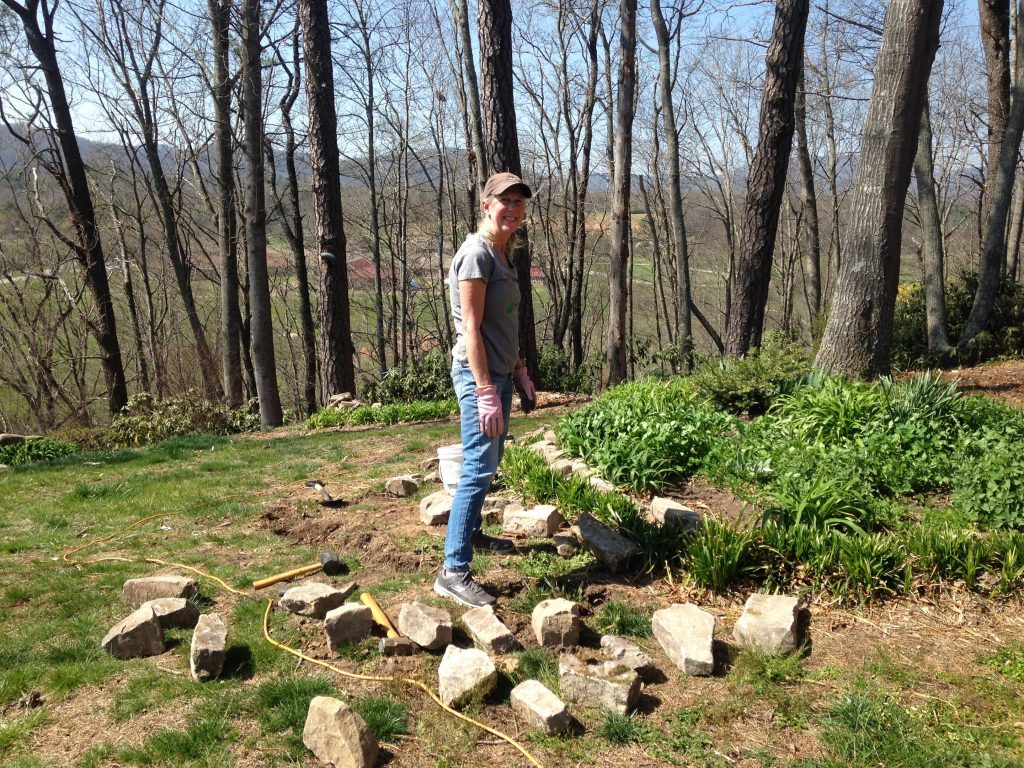 So last week Leigh Ann and I started our spring project by first tearing out the wooden timbers and replacing them with granite rocks. 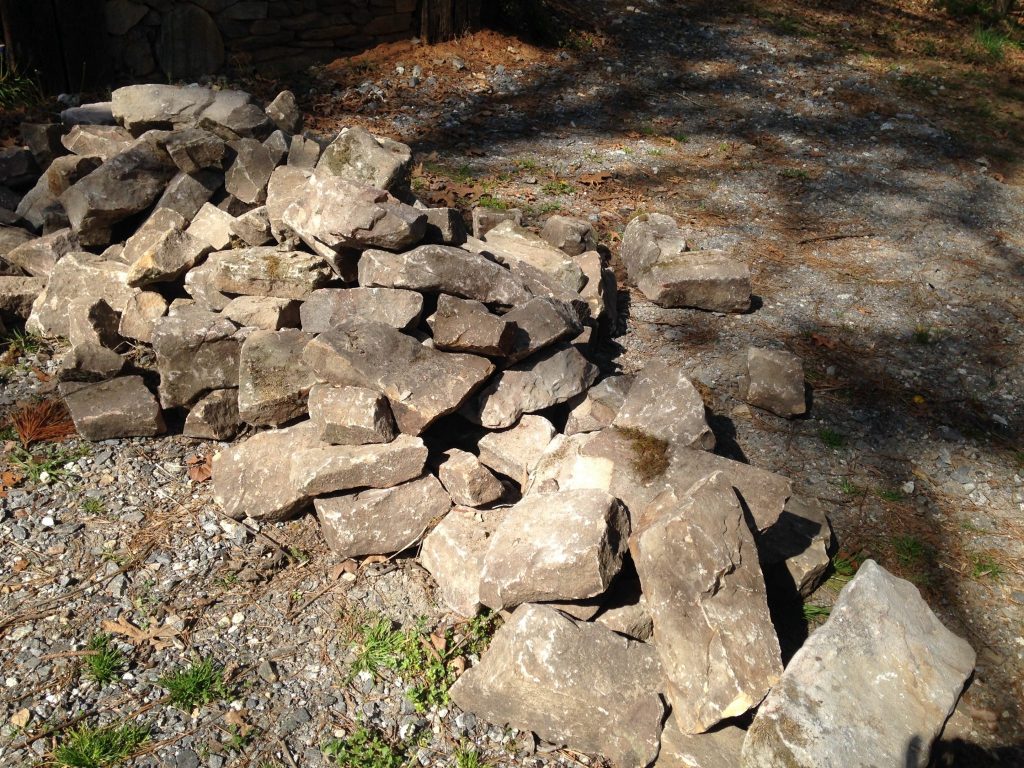 In 1912, as E. W. Grove was making plans to build the Grove Park Inn using granite boulders and rocks brought down from the slopes of Sunset Mountain, his architect gave him a sound piece of advice: “Calculate precisely how many rocks you will need — then double it.” 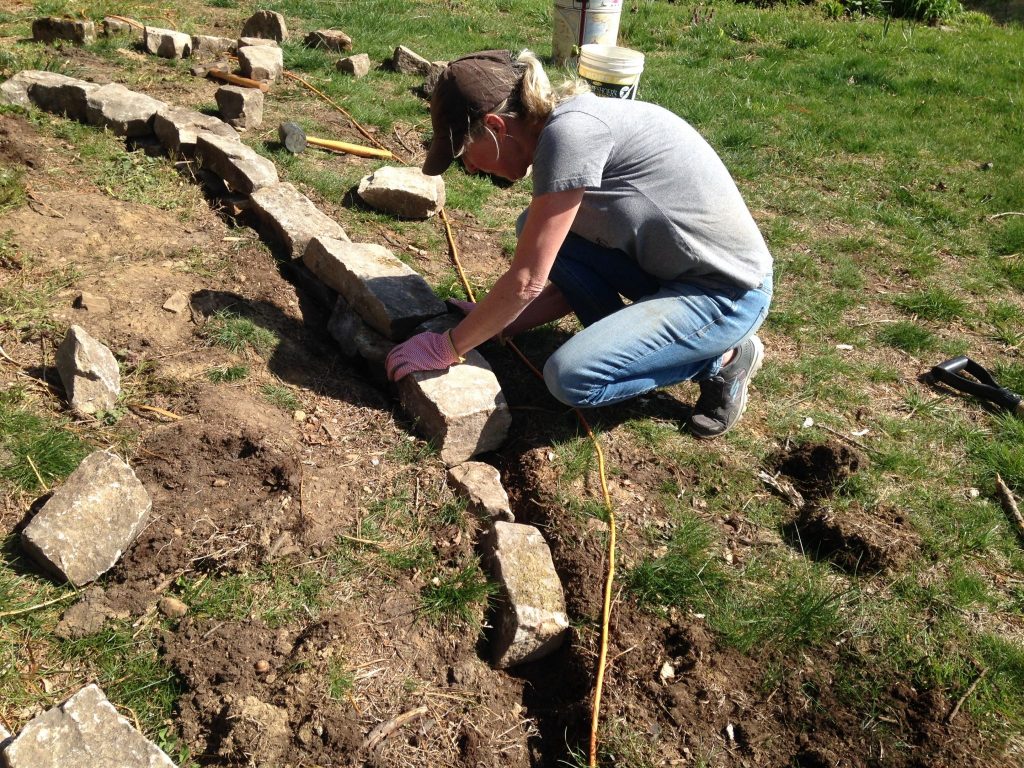 We started our new herb bed by laying out the line for a low retaining wall using a yellow extension cord, although rope, string, or a garden hose will work just as well. Then Leigh Ann dug a shallow trench so that the bottom row of rocks would appear to be coming up out of the ground. I think it was Frank Lloyd Wright who said something to the effect of, “Build it not on the ground, but of the ground.” Our front elevation will only be about a foot high, so the weight of the rocks will be enough to hold the dirt in place. Had we gone higher, we might have needed mortar to bond the rocks to one another. 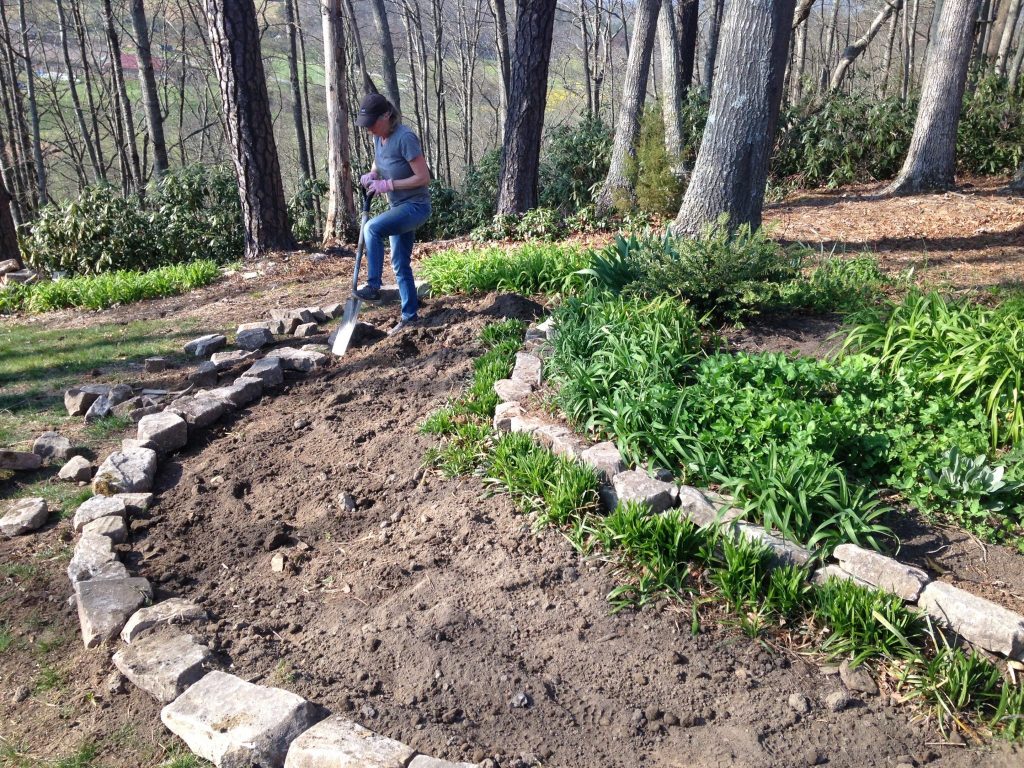 While Leigh Ann was finishing up the trench and wall, I dug out the grass that had been growing in what was now becoming our lower planting bed, then started backfilling the area with wheelbarrow loads of topsoil. 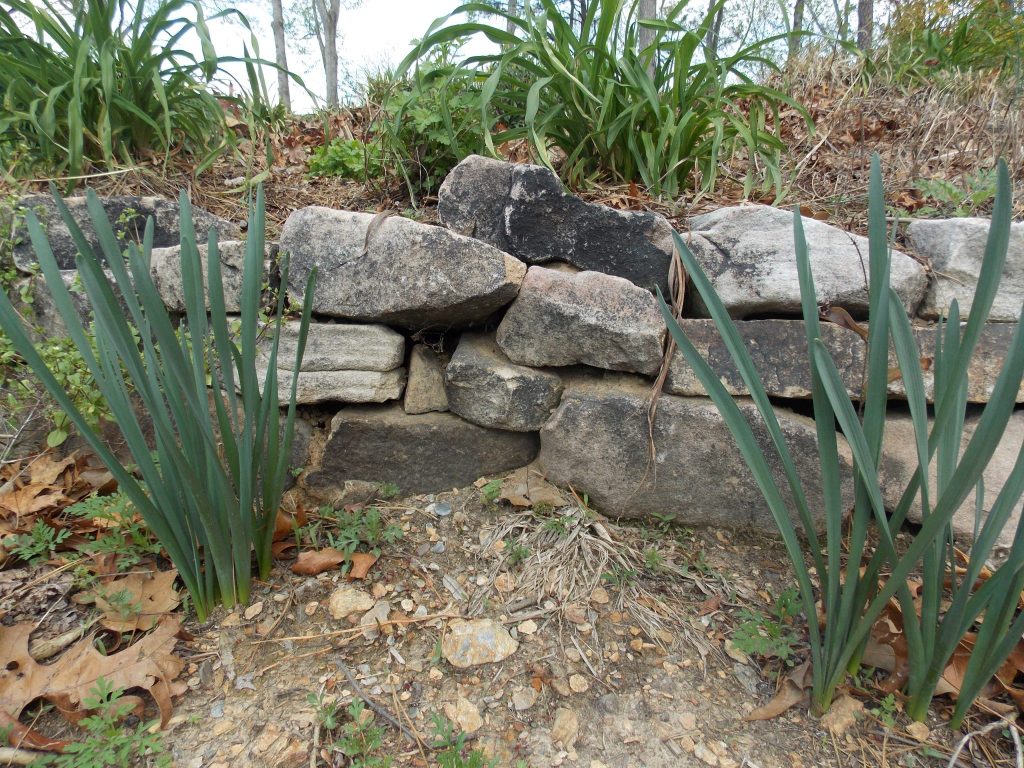 We won’t have a good photograph of how the new planting bed will look until we add the herbs and the final layer of dirt next month, allowing the dirt to settle among the rocks to make them look even more natural. This is a picture of a similar wall we built last year, so you get an idea of how much more natural rocks look than landscape timbers.

Build it right, build it once. 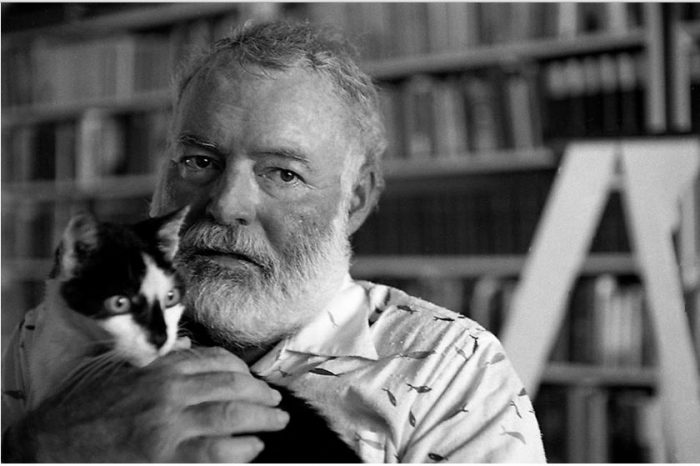