Squeezing the Juice Out of a Lemon

“When handed a lemon, make lemonade.”

We’ve all been handed our share of lemons, and I picked one of my own last week on my trip to San Diego.

Unlike a couple of earlier trips, on this one I had a rare afternoon to myself, so had put on my list to tour the famed 1905 Arts and Crafts home and museum, the Marston House. This 8500-square-foot, combination Tudor-Craftsman-Prairie School home is considered an Arts and Crafts gem, complete with furniture by Gustav Stickley, L. & J.G. Stickley, and Charles Limbert, as well as several fantastic examples of California plein air paintings.

My friend Elizabeth Clarke had warned me over lunch the previous week at Craftsman Farms that their hours were, as she described, “somewhat erratic.” In my rush to make the quick overnight turn-around from New Jersey to San Diego, I failed to heed her advice, assuming that, like most museums, the house would be closed on Monday, but open for tours on Tuesday.

That was my lemon ….

Turns out in October the house is open on Mondays, but closed on Tuesday and Wednesday, my two days in San Diego. And so I stood there on the rolling lawn, beneath the shade of an ancient eucalyptus tree, wondering what I could salvage from my visit, what lemonade I could make.

On the four-hour flight from Atlanta to San Diego, I had finished reading a book on Frederick Law Olmsted, America’s first true landscape architect and best known for designing Manhattan’s Central Park. Olmsted died in 1903, but his work influenced every major landscape designer of the Arts and Crafts era. His final masterpiece was Asheville’s own Biltmore Estate, which will be the subject of my introduction to the documentary film on Olmsted we will be showing at the February 20-22 Grove Park Inn Arts and Crafts Conference.

The five-acre grounds which George Cooke laid out for George Marston (1850-1946), a wealthy department store owner, historic preservationist, and philanthropist, followed the design principles set forth by Frederick Law Olmstead and carried out at Biltmore for George Vanderbilt. And since I could not tour the interior of the Marston House, I spent my time wandering about and studying the grounds, which I had all to myself.

A visitor to the Marston House in 1905 entered the gates to discover an open rolling lawn leading up to the front entrance, just as Olmsted had prescribed, with trees left on the outer boundaries, framing the entrance, but not interfering with that critical first view of the house itself.

At the rear of the house, following Olmstead’s advice, landscape architect George Cooke created a rectangular formal garden. Here is where George Marston enjoyed collecting various shrubs and flowers, tending to them after work and during his retirement.

And further out on the five-acre grounds, just like at the Biltmore Estate, Cooke left the canyon landscape in a controlled, but natural state, providing Marston, his large family, and their guests the opportunity to slip from the manicured front lawn or the formal rear garden and wander about the paths through the native California woods.

Just as I did, making my trip to the Marston House a delightful glass of lemonade. 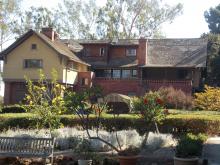 Never forget to squeeze a lemon.

Top: The front of the Marston House, designed by Irving Gill and William S. Hebberd.

Middle: A view through an arched entryway.

Lower: The rear of the house seen from the formal garden.

And if you have not received one, please click on the link below to see and print the brochure and agenda for the 28th National Arts and Crafts Conference and Antiques Show at the Grove Park Inn on February 20-22. Additional information may be found at HTTP://WWW.ARTS-CRAFTSCONFERENCE.COM.

A Walk with Frederick Law Olmsted