After leaving East Aurora two weeks ago, I drove east for a couple of hours until I reached Syracuse, a city best known to Arts and Crafts devotees as the birthplace of Craftsman furniture. It was in Syracuse in 1901 that Gustav Stickley first began producing Arts and Crafts furniture in a modest brick building in the old factory district. It is also the city where he remodeled the downstairs of a typical late Victorian house into the first totally integrated Craftsman interior, and where he founded the most influential magazine of the movement, The Craftsman.

In sharp and almost painful contrast to the restored Roycroft Campus, however, there is no evidence remaining of Gustav Stickley’s accomplishments in Syracuse: the factory has long since been felled, his former home sits empty, and the downtown offices where he made the leap from being just another small furniture manufacturer to an influential publisher and disseminator of the Arts and Crafts ideals have long since been demolished.

In contrast, East Aurora has so embraced Elbert Hubbard that they have lined Main Street with beautiful, wooden Arts and Crafts trashcans emblazoned with Roycroft mottos, as well as a ten-foot tall bronze, Lincoln-like statue of him.

Syracuse doesn’t even has a plaque honoring Gustav Stickley.

One of the first things I do in any city is to get out and walk it, and so in Syracuse I headed up “The Hill” to Syracuse University. Founded in 1870, it has an historic quad surrounded by several well-preserved buildings marking the early days of the university. Syracuse and the university were also the home and office of the person I would nominate as “the single most important woman of the Arts and Crafts movement.”

And I know that Irene Sargent doesn’t have a plaque dedicated to her.

How this stern, stout, serious university professor — fluent in five foreign languages — up on the Hill met the 42-year-old Gustav Stickley down in the factory district I cannot even fathom, but I do know this: every time I come across a reference to “The Craftsman magazine by Gustav Stickley,” I wince a little. While his name appeared on the masthead, I suspect the most important thing Gus wrote for those early and influential issues of The Craftsman was the check to the printer.

The heart, the soul, and the message woven throughout the pages of The Craftsman were all Irene Sargent, a nearly 50-year-old, perhaps slightly frustrated teacher and now magazine editor, who was looking for a voice to deliver her personal message.

And not to belittle Gus, but think about it: he was born to a large and dirt-poor farming family. His alcoholic father pulled him out of school by eighth grade to become a stonemason’s tender. Gus never went back to school. When he died, he didn’t leave a collection of letters, notes, essays, or manuscripts. As a collector of Arts and Crafts autographs, I can state that his only signatures I am aware of have been found on cancelled checks and business documents.

So, we are to believe that a man with only an eighth-grade education in a one-room schoolhouse suddenly fills more than 80 pages a month with editorials, articles, essays, and insight into the lives of William Morris, John Ruskin, and the medieval origins of the tenets of the Arts and Crafts movement? While also running a furniture factory six days a week?

Lets give credit where credit is due.

The Craftsman was Irene Sargent’s magazine.

Even without a statue, a plaque, or a trashcan. 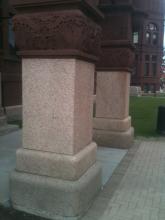 Wave to a stranger – and see what happens!

NOTE: Respected author Cleota Reed has recently written a book entitled Irene Sargent: A Legend In Her Own Time. This limited-edition, hand-printed, letterpress book (Clinker Press) is being distributed by the Arts and Crafts Society of Central New York. For more information, please go to http://www.acscny.org.

Top: Her first issue of The Craftsman.

Lower: Look closely: the same spot where Irene’s picture above was taken!

Next Week: Tracking Down a Tragic Couple