The lady was a no-show.

The Pink Lady, that is.

If you have read a few of my earlier columns, you know I have been hearing stories about the Grove Park Inn’s resident ghost — a beautiful young woman in a flowing pink gown — since my first visit to the historic Arts and Crafts hotel in 1986.

The stories date back several decades and have a familiar theme: a shy young woman prone to playing pranks, such as opening and closing doors, appearing in a mirror, disappearing around a corner, turning on and off lights, or slipping into a restroom, never to reappear.

And since 1986 I have been hoping to spot this elusive young lady, but to no avail.

For several years she seemed to have disappeared (no pun intended), but in the past few months has become more active, showing herself more often, but still in a playful, non-threatening way. So, when Leigh Ann and I had the opportunity to spend a night at the Grove Park this past month, I decided it was time to try again.

I asked for room 545, the one where the most unusual occurrences have been reported. At the front desk the young man who checked us in made sure we knew room 545 has been the subject of some strange occurrences. With a smile, I assured him I was aware of that. And it was with encouragement I learned two small children and their parents had been awakened during the night just two weeks earlier by consistent knocking on the walls.

We arrived a few hours before our dinner reservation, and I wasn’t quite sure how I should act: nonchalant, as if I had no idea she even existed, or inquisitive? So, I did what came natural: I opened a bottle of wine. When that had no effect on her, I suggested to Leigh Ann that we have a second glass in a pair of soft leather chairs outside the room in the Palm Court (see photo), where she also has been spotted. Still, no sighting.

After a long and delightful meal downstairs, we returned to our room, hoping to find some evidence of a prankster in our absence. Nothing amiss.

I had no problem falling asleep, and was even glad to have awakened at 2:47am, as I am prone to do at home for no particular reason. This time, however, instead of rolling over and falling asleep, I forced myself to stay awake for a while, straining to adjust my eyes to the near-darkness, punctuated by a small stream of light coming in between the curtains I had purposely left slightly open.

No knocking, no chills, no hair raising on my arms, no apparition in the mirror.

I eventually fell back to sleep, and awoke in the morning to find everything in the room just as we had left it.

I wish I could say that as I closed the door for the final time I heard a girlish giggle from beneath the door, but she wouldn’t even give me that small degree of satisfaction.

And so I will continue waiting, and hoping, and will have to remain content with the stories the employees continue to tell me, such as our waiter who swears last week “something” picked up one wine glass from a row he had placed on a table, carried it a few feet, and dropped it to the floor.

I should be so lucky. 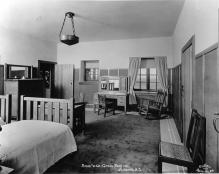 Come February, maybe you’ll have better luck than me!

Note: if you have not yet seen the brochure for the February 20-22 National Arts and Crafts Conference and Shows, click here:

PS – The U-tube video claiming to be the Pink Lady is a hoax, as it shows her standing at a window set in a brick wall — of which there are none at the Grove Park Inn, as the original walls are all granite!

Top – The west side of the Grove Park Inn.

Middle – The historic Palm Court, seen from the 5th floor.

Ace is the Place for Me