“Have you written your column yet?” Leigh Ann asked on Sunday afternoon as we were driving over to our local Ace Hardware store.

“No,” I explained, “but I’m expected something extraordinary to happen any minute now.”

Now, turning me loose in an Ace Hardware store on a Sunday afternoon is almost guaranteed to give someone a story to tell (“The strangest man came up to me in the store today,” she said to her family over dinner.), as my list of restoration projects is apt to have me looking for black o-rings, braided lamp cord, tiny slotted brass set screws, #1200 grit wet-dry sandpaper, dark paste wax, and a thin sheet of cork.

And my list never stumps the Ace employees. (“That’s a fine threaded, quarter-inch, #28 machine screw,” he announced taking the rusted blob of metal from my outstretched hand. “Need it in brass or zinc?”)

But, as it turned out, the surprise of the day came not on my little journey to Ace Hardware but back home, as I checked my late afternoon emails. There I discovered a message from a friend, along with four photographs she had been emailed of a carved wooden bowl decorated with oak leaves and acorns. I knew immediately it had been made between 1905-1915 here in Asheville by one of the woodcarvers at Biltmore Industries.

This small cottage Arts and Crafts industry had been founded and supported by George and Edith Vanderbilt to train young area men in the craft of woodworking and woodcarving. Their assortment of carved walnut bookends, candlesticks, picture frames, bowls, letter openers, and an occasional piece of furniture was sold both to Asheville residents and to traveling tourists, which explained why the bowl pictured in my friend’s email had showed up in an estate sale in southern California.

Now in my younger days, my motto was “If it’s brown, buy it,” but as my hair has grayed and my house has filled, I have become far more selective, more apt to buy green pots rather than brown furniture. However, the deep, detailed carving and the Asheville connection of this wandering walnut bowl quickened my heart rate, and I started tracking down the thread of afternoon emails.

As I soon learned, the Biltmore Industries bowl had been found at an estate sale by a woman who makes a very impressive living selling her discoveries on eBay. That was where the bowl was headed, just before she decided to do a little research into the branded Biltmore Industries mark on the bottom.

A quick Google search led her to Biltmore Industries, which still exists in Asheville as five restored Arts and Crafts buildings nestled on a pine-covered hillside next to the famed Grove Park Inn, site of the 28th National Arts and Crafts Conference and Shows in February. Today the historic buildings are home to a delightful café, an Arts and Crafts museum, an antique automobile museum with Roycroft chandeliers, the award winning Grovewood Gallery, and, quite naturally, workshops for talented artisans: art potters, woodworkers, stained glass artists, bookbinders, and makers of musical instruments.

One connection led to another and within a few hours the woman and I were chatting away, exchanging stories about estate sales and shopmarks, history and collecting, and houses brimming with stuff. By the end of our conversation I had managed to nearly ruin the chicken I had put on the grill just before my cell phone rang, and she had decided to send the Biltmore Industries bowl back to Asheville and my home rather than post it on eBay.

What a fascinating combination. 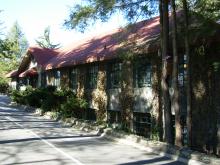 As Frank Lloyd Wright advised: Embrace technology – and use it to your advantage.

Middle: Detail of a carved bowl.

Lower: One of the five Biltmore Industries buildings today.