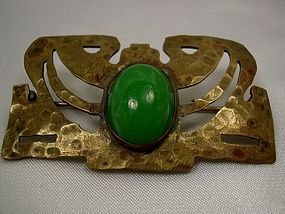 That statement aptly applies to researching Arts and Crafts firms and individuals whose work we admire and collect. Regardless what we collect, we share a common thread: we love information as much as we love those items.

“An Arts and Crafts mystery solved! As a resident of Dayton, Ohio and an Arts and Crafts collector, I have several pieces from the Frost Arts and Crafts Workshop in my collection. They were known for etched metalwork items, like jewelry, desk and smoking items, as well as trays and boxes. A few years ago I picked up a catalog reprint hoping I could find out where Frost was located in Dayton. But, alas, there was no address listed. A couple of clues were in the catalog, however, including a picture of the building and a picture of the bridge that could be viewed from the workshop. 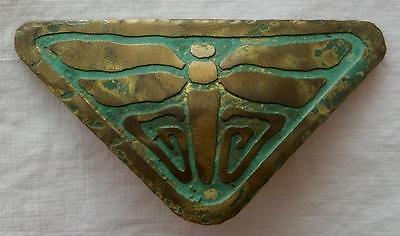 “Recently, I was doing a Google search looking for the address when I came upon an ad for Frost in the February 1910 International Studio magazine. In the ad, the address was listed as 32 Cedar Avenue.

“Well, there is no Cedar Ave in Dayton. Perplexed, I turned to a wonderful Facebook page called Dayton History Books Online and asked the page owner if he’d ever heard of Cedar Avenue. His quick response was, yes, there was a Cedar Ave located on the west side of the river, between Fourth and Elgin Street and one block east of Bank Street. (A side note: this location is less than a mile from the Wright Brothers cycle shop, which you can visit today.)

“You may wonder ‘how can a street disappear?’ Well, in March 1913, there was a great flood in Dayton, which killed 360 people and destroyed 20,000 homes. After the flood, the Miami [River] Conservancy was formed to build a flood control system. Part of that work included building several dams and widening the river. 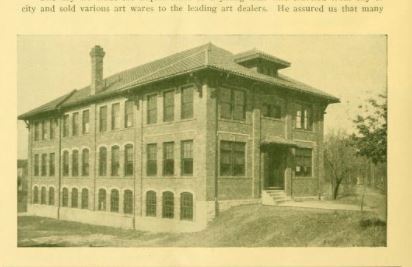 “I followed up with the Dayton History Books Online page owner to ask if it was safe to assume that the Frost Workshop was destroyed in the flood. He said yes, as it no longer appears in the city directories after the 1913 edition, which was printed before the flood occurred.

“So, the mystery of where the Frost Workshops was located has been solved! It’s on a street that no longer exists and it was taken out by a flood. Compared to other Arts and Crafts firms that didn’t survive the public’s changing tastes, or the advent of World War I, Frost’s demise is unique.

“A fun project for a cold, snowy weekend.”

And, so, I’ll ask: isn’t there an small Arts and Crafts firm in your area that you could research, adding to our growing encyclopedia of information?

Note: For more information on the Frost Arts and Crafts Workshop, please see our Collector’s Guide.