The Roycroft Campus in 1986

The Roycroft Campus in 1986

As word came down from East Aurora that Christine Peters is stepping down from her post as executive director of the Roycroft Campus Corporation, I could not help but think back to my first journey to the Roycroft Campus in 1986. Compared to what Christine is leaving as her legacy, the campus was then in complete disarray, with the deteriorating Roycroft Inn on the verge of closing and the owners of the other dozen or so original buildings demonstrating little willingness to work together on a cohesive plan to revitalize Elbert Hubbard’s vision.

Things were so bad that the National Trust for Historic Preservation put the Roycroft Campus on its “most endangered” list.

I had just moved to North Carolina, had just toured the Grove Park Inn, and had just heard about the Arts and Crafts conference being held that year at the Roycroft Inn. The conference had been organized by Roycroft collector Boice Lydell, Roycroft historians Robert Rust and Kitty Turgeon (a recipient of the Arts and Crafts Lifetime Achievement Award), and Linda Hubbard Brady.

Innkeeper Kitty Turgeon found a fellow Arts and Crafts collector who was willing to let me sleep on the extra bed in his room and I booked a flight to Buffalo. I stepped off the plane and naively hailed a cab, only to learn that East Aurora is about 30 miles from Buffalo. Luckily, I was able to rent a car and drive myself to East Aurora, where I discovered for the first time in my life the euphoria of being surrounded by other Arts and Crafts collectors who shared my budding passion for all things nut-brown, Grueby green, and gently hammered.

And so many of the people I met that weekend have remained lifelong friends, something I am sure has happened to many of you, if not at the Roycroft Inn, then possibly at the Grove Park Inn.

The weekend was packed with antiques (boy, I wish I had bought more than I did at those 1986 prices), seminars, good food, late night discussions, walking tours, bus tours, and friendships, and if that all sounds familiar, it is because I left East Aurora three days later inspired to recreate that experience at the Grove Park Inn.

It had been announced that same weekend that the Roycroft Inn would be closing for what amounted to an eight-year restoration, and none of us wanted to risk letting the fire go cold. After convincing the management at the Grove Park Inn that an Arts and Crafts Conference could work, I began contacting those same antiques dealers, collectors, speakers, and friends I had met in East Aurora and convinced them to leave their snowdrifts, snow plows, and snow shovels behind and come to Asheville, North Carolina, for a continuation of what they had experienced on the Roycroft Campus.

And while my personal focus then shifted from the Roycroft Inn to the Grove Park Inn, others such as Christine Peters remained determined to reverse the slide into oblivion the Roycroft Campus seemed headed for. We have chronicled their progress in a lengthy article which will appear in the Arts and Crafts Conference Catalog in February, but Christine will be the first to tell you that they have a long ways to go before the Roycroft Campus is complete in its fulfillment of purpose.

The Roycroft Campus Corporation and its new executive director, Curt Maranto, will be on hand at the Grove Park Inn, anxious to share with you their plans for the next step in the revitalization of the Roycroft Campus.

Please be sure to stop by, introduce yourself, and learn more about the future of the campus. 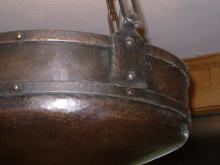 Top photo: the original Copper Shop as it appeared several years ago. Middle: the Copper Shop after recent stabilization.

Bottom: A GPI ceiling light made in the Roycroft Copper Shop in 1913 (designed by Victor Toothaker, with his characteristic exposed rivets and parallel bands).