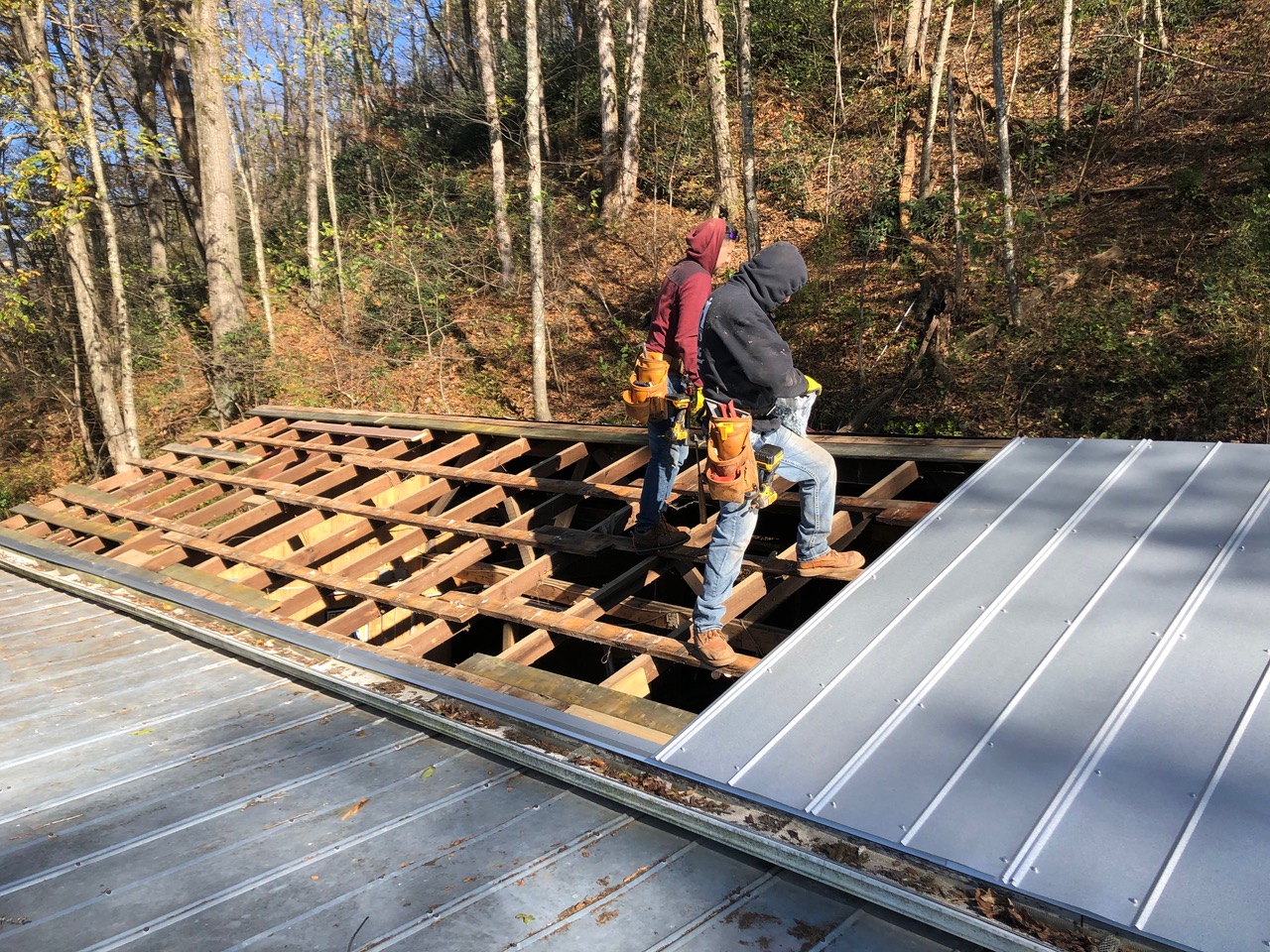 If you happened to see last week’s column, you know I have been taking advantage of our beautiful and dry fall weather to make some improvements to our horse barn. When I bought this farm twenty years ago, what we now call our barn was actually a pole shed. Literally, it was built around and atop about a dozen 10” hickory tree trunks. My first major project was to replace the rotting poles with 6” x 6” pressure-treated posts, as well as to build four stalls and a feed room. A few years later I built my first addition on the west side. Ten years ago, I added a north addition running the length of what was slowly becoming a modest barn. 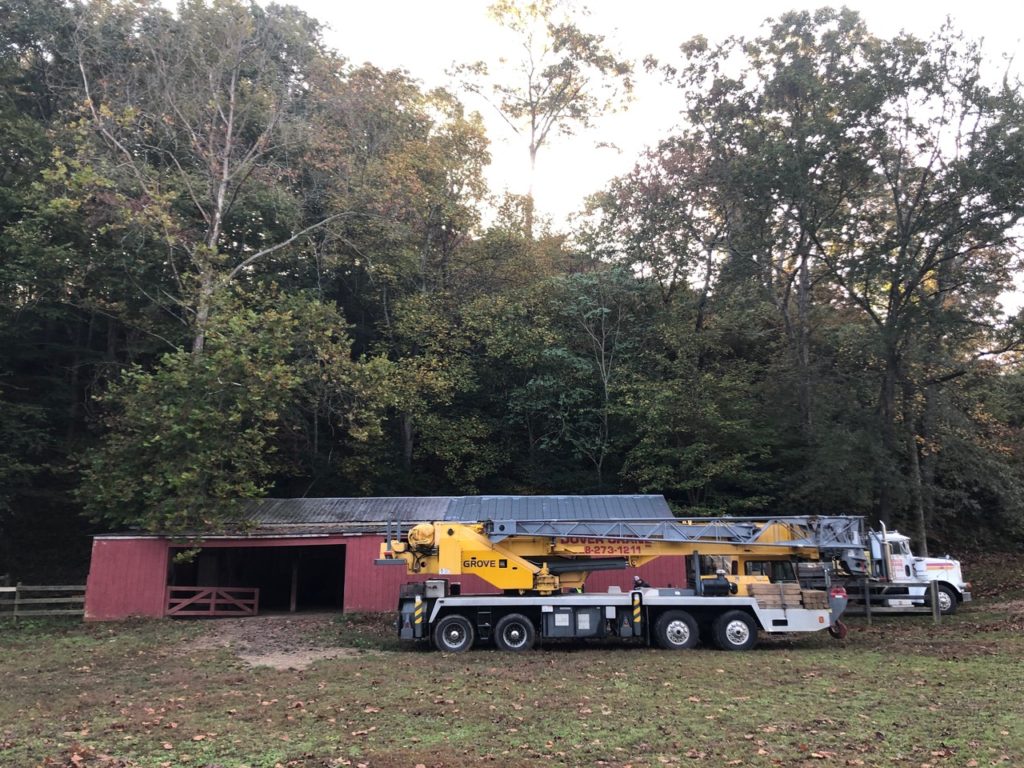 Over the course of twenty years, however, the original metal roof continued to deteriorate, due in no small part to the large and decaying sycamore tree dropping leaves and limbs on it. Last week I hired a crane and tree crew to safely remove the sycamore, although in the process a few more dead limbs did puncture the already expired original metal roof. This past Monday, then, although the morning temperatures hovered around freezing, my roofing crew arrived. 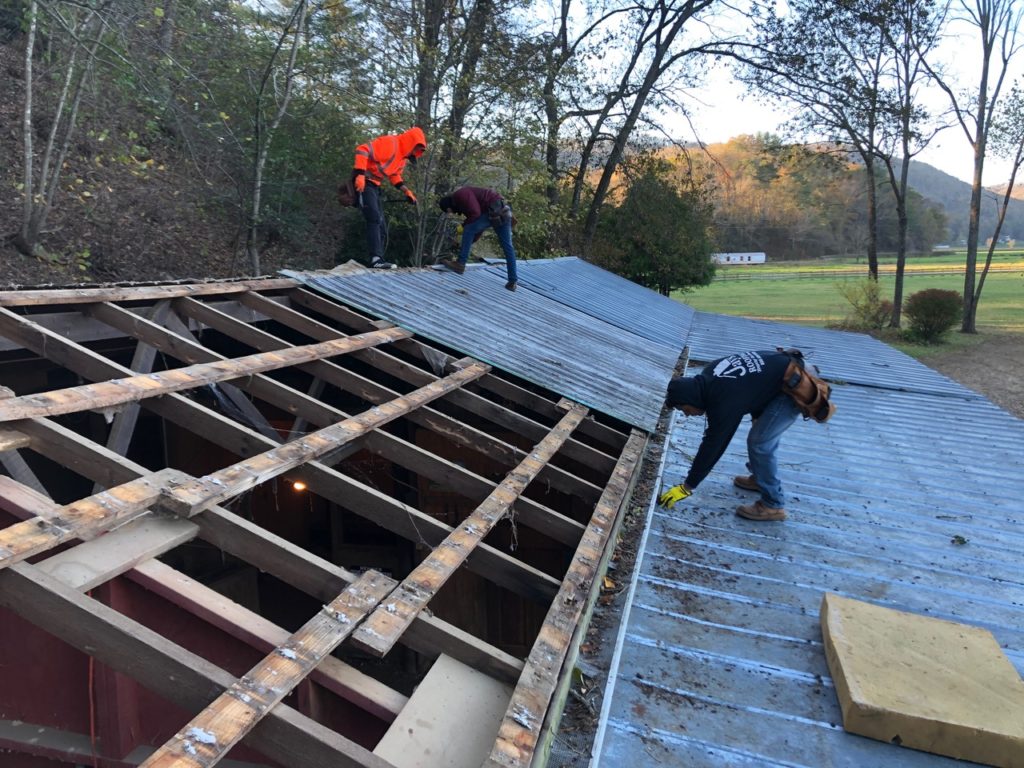 Working atop the metal roofs I had installed on my additions ten years earlier (when I was younger and determined to do everything myself), the three-man crew began pulling nails and ripping off the original pole shed roof. As they exposed the rafters beneath the sheets of metal, I began nailing my recycled pressure-treated fence boards beside and in place of any rotted sheathing boards. I suspect the crew got a few chuckles out of me using my hammer and nail pouch, both saved since I worked as a roofer in college, as they prefer an air compressor and nail gun for carpentry work. 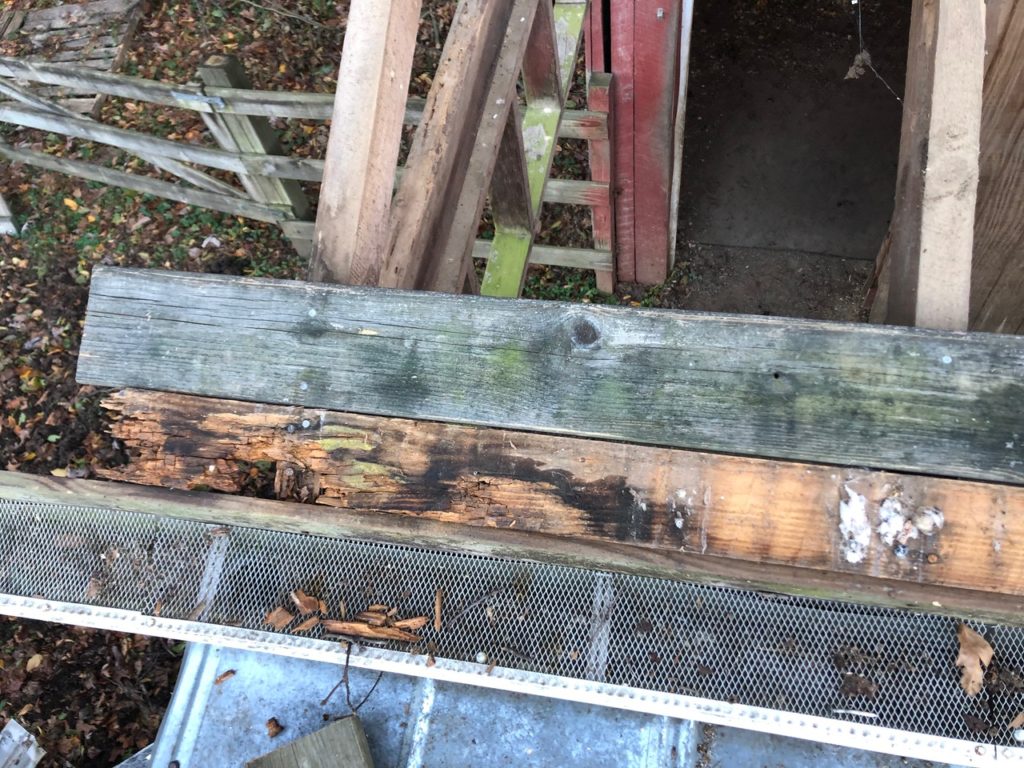 As soon as I finished, the crew immediately began hoisting 20-foot sections of steel sheeting up to the rear roof. A brisk morning breeze rolling in from the upper Midwest made their tightrope walk across the rafter skeleton even more treacherous, as each sheet was transformed into a sharp-edged sail. But they took their time and chose each step carefully, knowing one slip (or rotted board I had missed) would be disastrous. 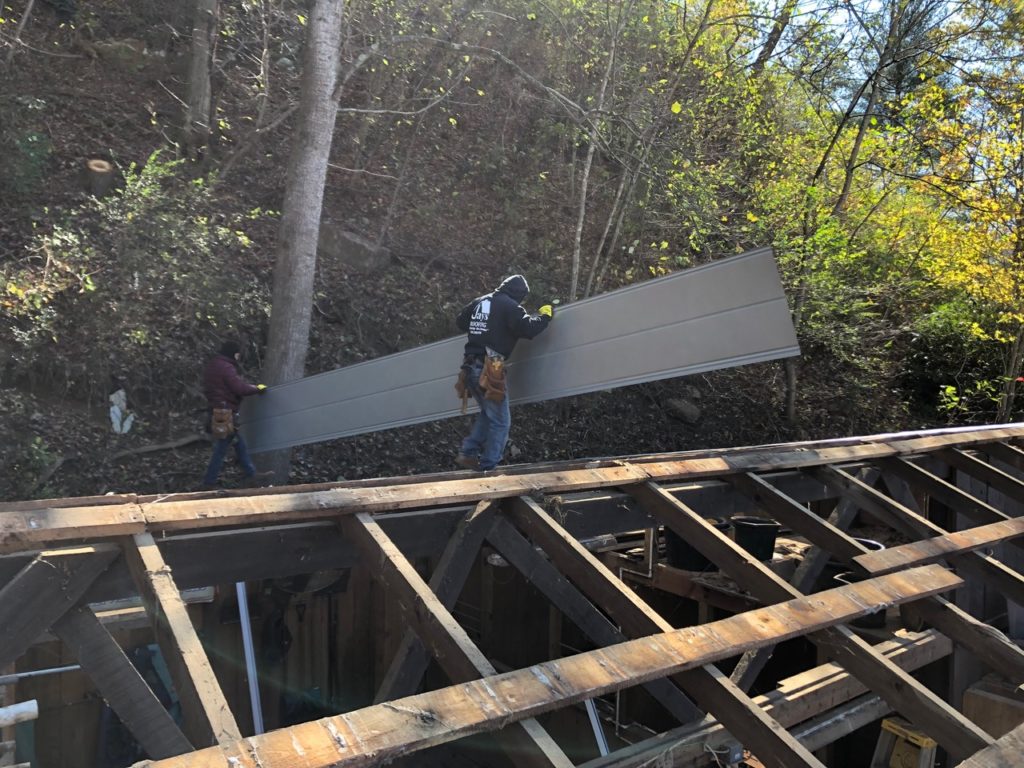 By mid-afternoon the sun was beginning to make its way over the top of our knoll, just as the crew finished the rear section of roofing and turned their attention to the shorter front side. As they progressed the length of the building, they secured each sheet with several galvanized screws drilled through the metal and deep into the sheathing boards spanning the rafters. 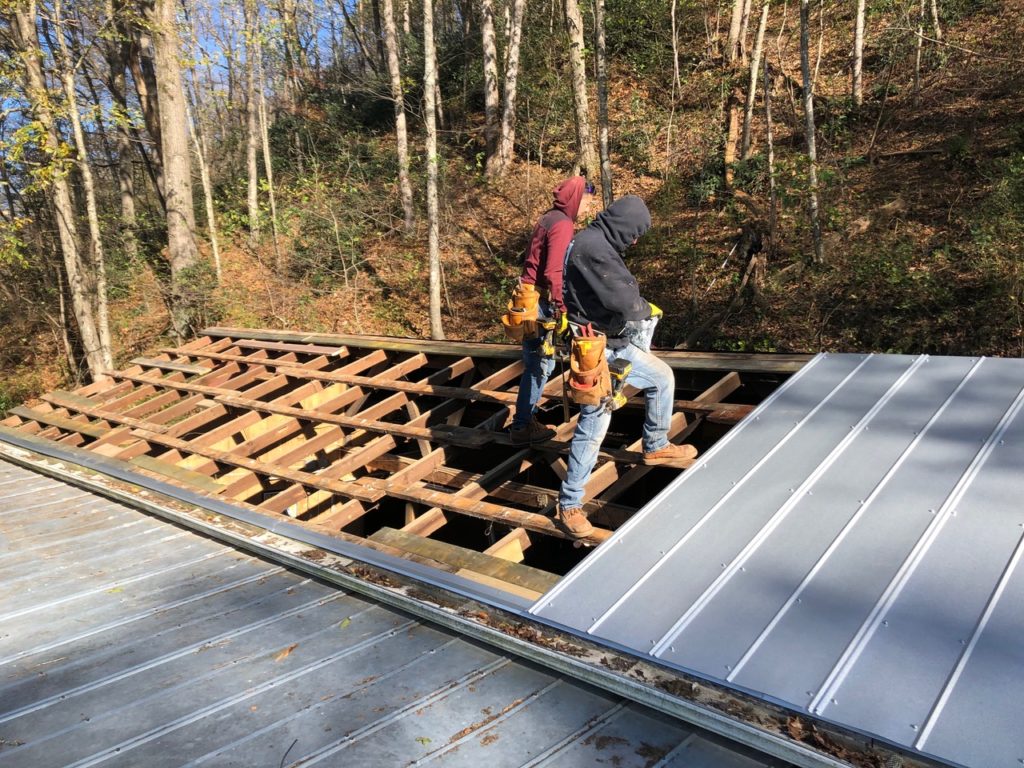 Amazingly, they finished what I expected to be a two-day job in just ten hours. What made that possible for a three-man crew was a clear division of labor. On the roof there was one foreman and one second in command, and on the ground a younger man who supplied them with tools, screws, and sheets of metal, all hoisted by clamps and ropes. Each knew his responsibilities, which meant few time-consuming trips for any of them up and down the ladder. 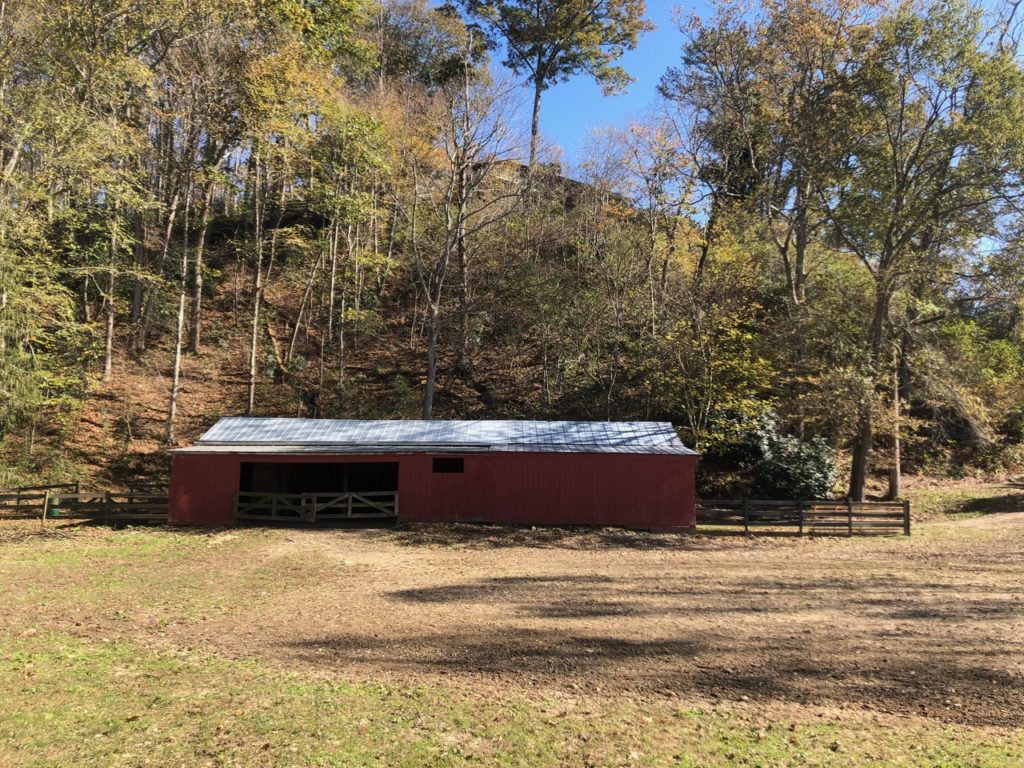 Personally, I never had any regret over not tackling this job myself, as I marveled over their steady and efficient approach and techniques. They never complained and worked as smoothly together as any team I have ever watched, all the while taking pride in their craftsmanship, even on something few people will ever see up close.

“Craftsmanship names an enduring, basic human impulse:  the desire to do a job well for its own sake.” – Richard Sennett, The Craftsman

“If you are going to do something, do it right,” – William Johnson, my father 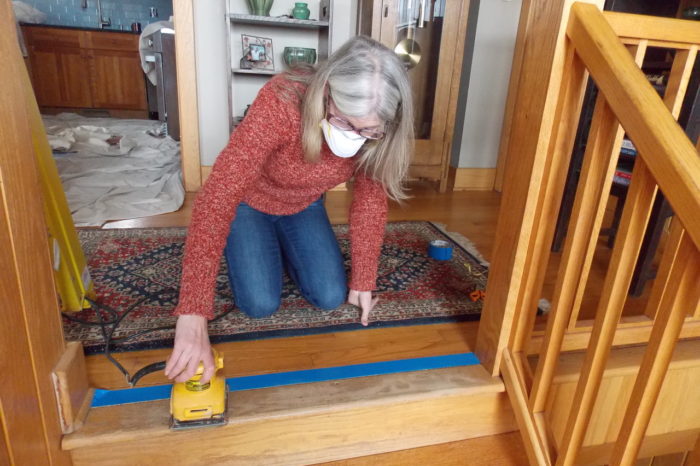 Getting - and Keeping - Good Workers