Actually, it was Jan, my assistant, who has been on vacation these past few weeks, so rather than working on the 31st National Arts and Crafts Conference — which will be taking place February 16-18 — I did the next best thing. 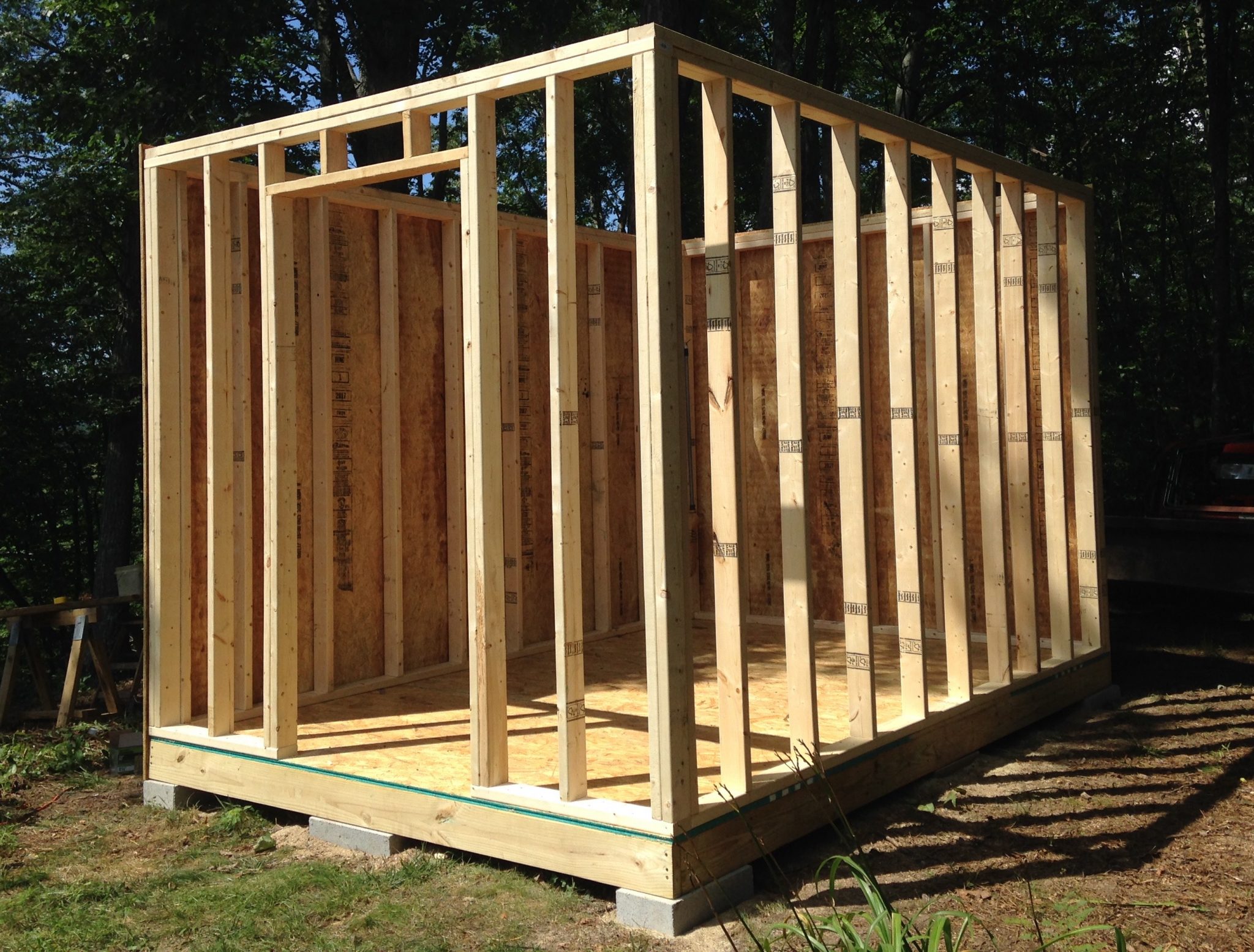 I must confess:  I love building stuff. So, while I state that I built this 8’ x 12’ potting shed for Leigh Ann, I did it as much for me as I did for her. Not that I plan on moving any of my tools into it, for the finished shed will be her domain, but I loved planning it with her, then sketching out the arrangement of studs, windows, skylights, outlets, and doors, making my shopping list for Lowes and Home Depot, and wearing a tape measure on my belt for two weeks.

And while I still have to finish the doors and windows, all of which will have Arts and Crafts stained glass in them, and am waiting for the cedar siding to arrive, structurally it is done.

The seed of the idea was planted by Leigh Ann, who I recently caught gazing at a row of storage sheds lined up in the parking lot at Home Depot. Once inside even the best of them, I was appalled at the flimsy construction, the second-rate materials, and the poor design. “I can do better than this,” I declared, immediately sensing that perhaps that is exactly what she knew I would say.

And so on a Monday morning, exactly two weeks ago, I set the concrete blocks, squared and leveled the floor joists, and glued and nailed three sheets of three-quarter-inch subfloor to them, forming the floor for an 8’ wide by 12’ deep shed. 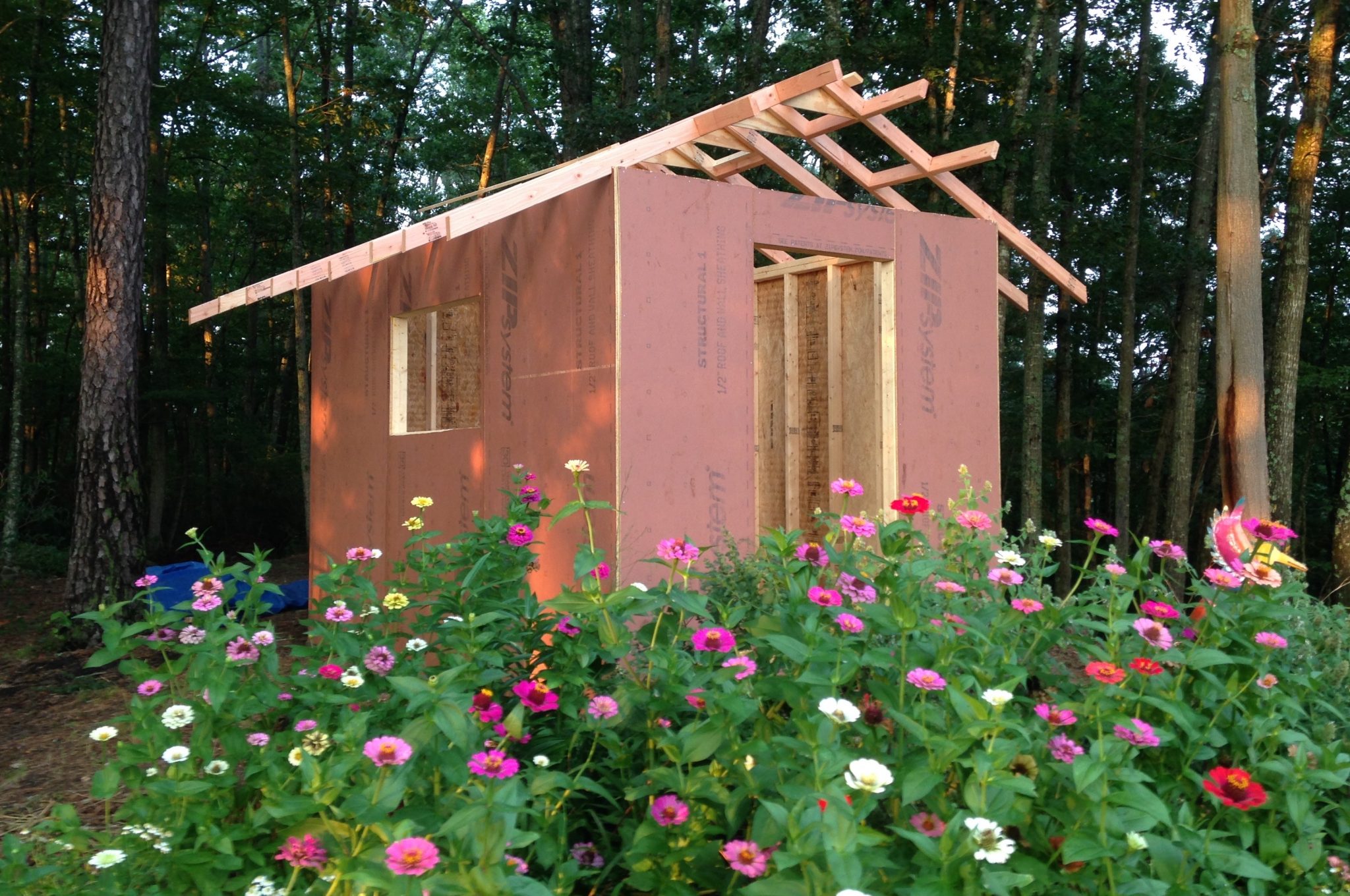 After my next trip to Lowes, I began nailing together the sill plates and studs for the four walls, then lifted each one upright, securing all four to the subfloor, the rim joists and to each other (top picture). Once they were stabilized, I set half-inch thick 4’ x 8’ sheets of wall sheathing atop blocks I had placed on the ground around the building and nailed them to the vertical joists.

After experimenting with a few options for the angle of the roof, I cut and assembled ten rafters, spacing them sixteen inches apart, rather than the twenty-four inches in the pre-built sheds we saw. 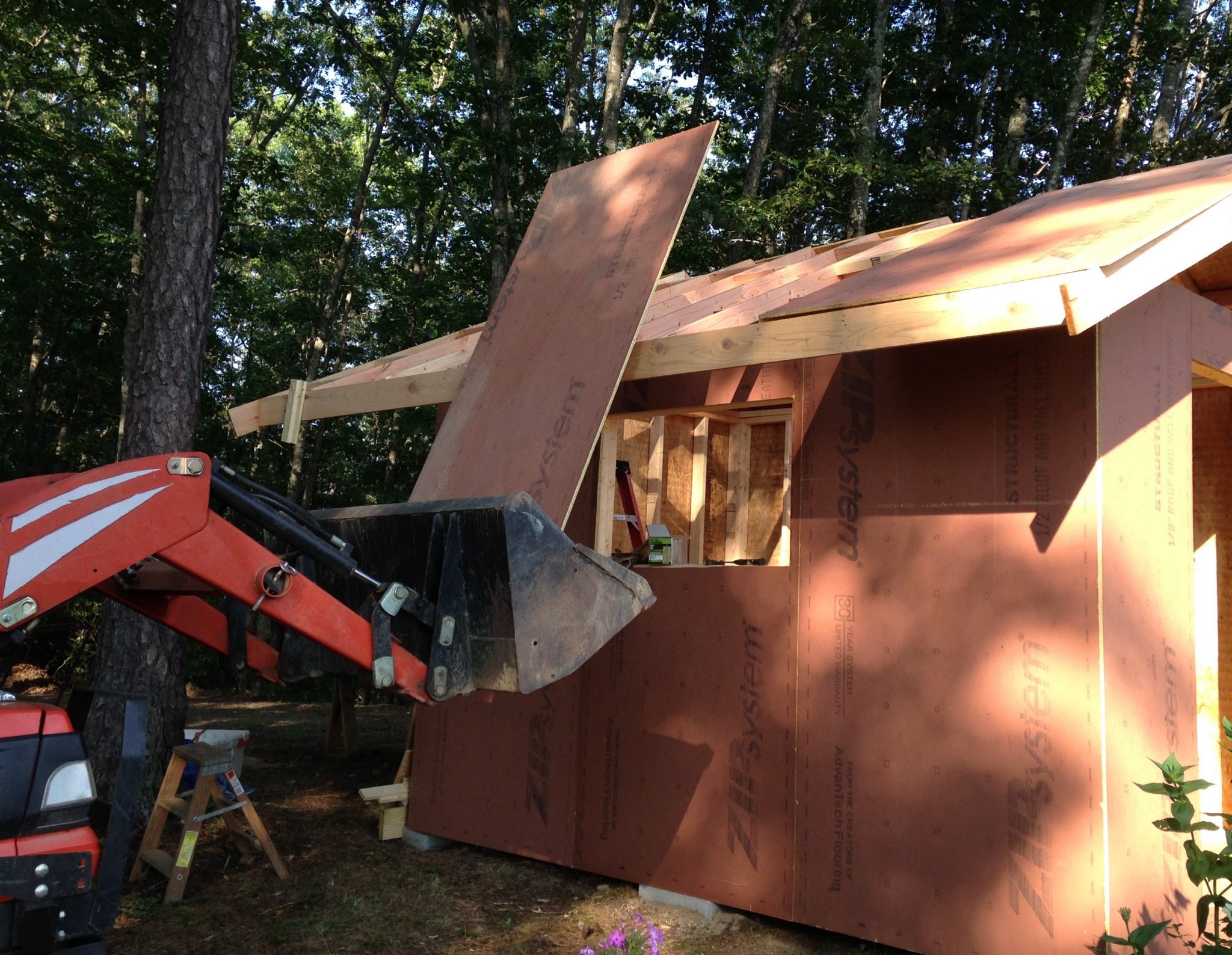 My greatest challenge working alone was figuring out how I could get each sheet of half-inch plywood on top of the rafters to form the roof. The 4’ x 8’ sheets were too heavy for me to push up the ladder ahead of me (which also seemed a bit too dangerous, as wrestling a sheet of plywood while balanced atop a ladder eight-feet in the air has sent more than one DIY-er to the emergency room). Turns out I was able to slide each one into the bucket of my tractor, lift it up hydraulically, and then slide it onto the rafters before quickly nailing it in place. 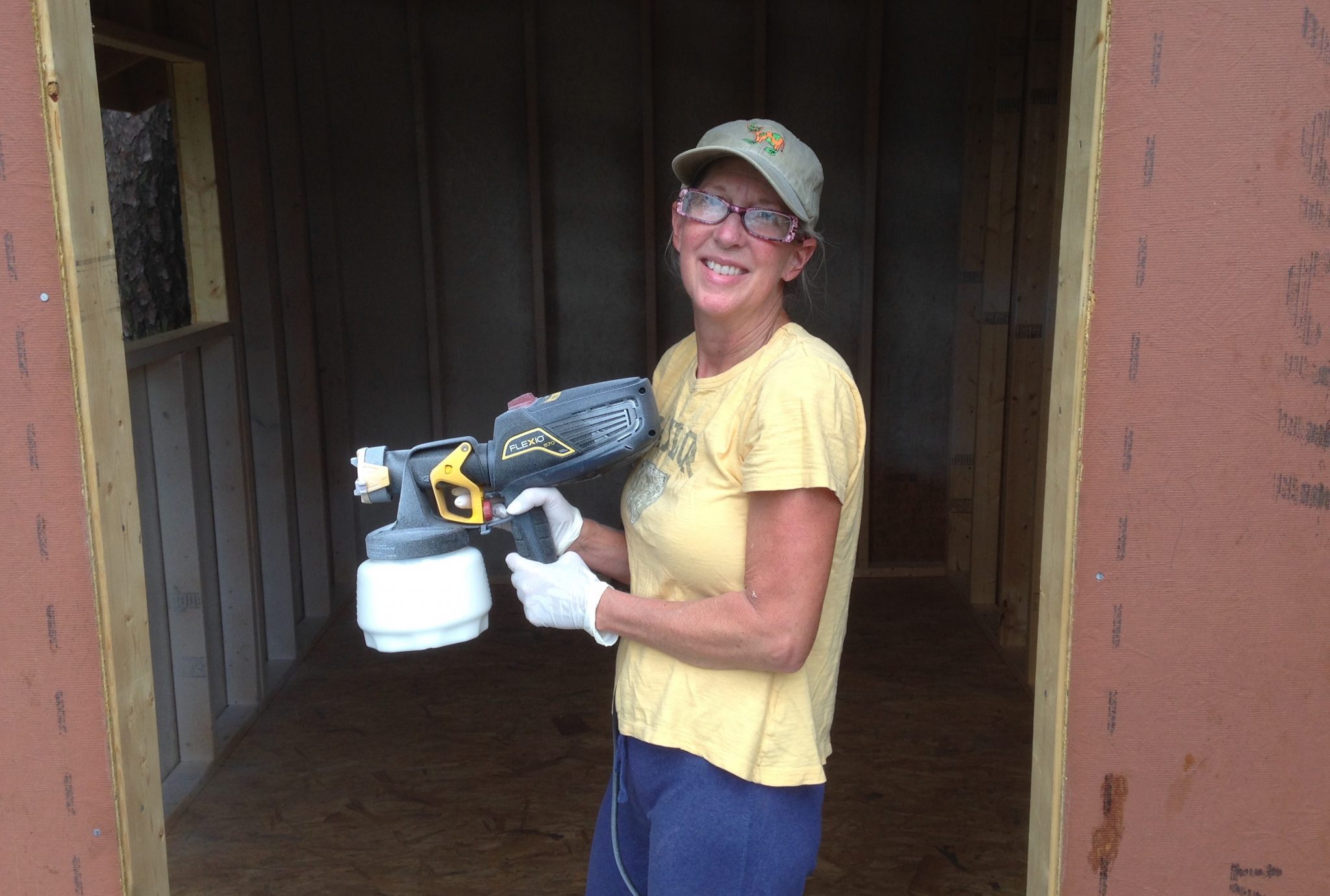 The last few days I spent building the four skylights, a 6’ x 8’ deck on the front, and the two sliding doors and two swinging windows (which are still in my workshop). And while Leigh Ann has always been ready to make design decisions at noon and when she arrived home from work, on Saturday she came back from Sherwin-Williams with the paint, picked up the electric paint sprayer, put on her safety glasses and spent several hours applying two coats of primer and two coats of latex paint to the floor, walls, and ceiling.

And on Sunday we rested.

“I find it wholesome to be alone the greater part of the time.” – Thoreau 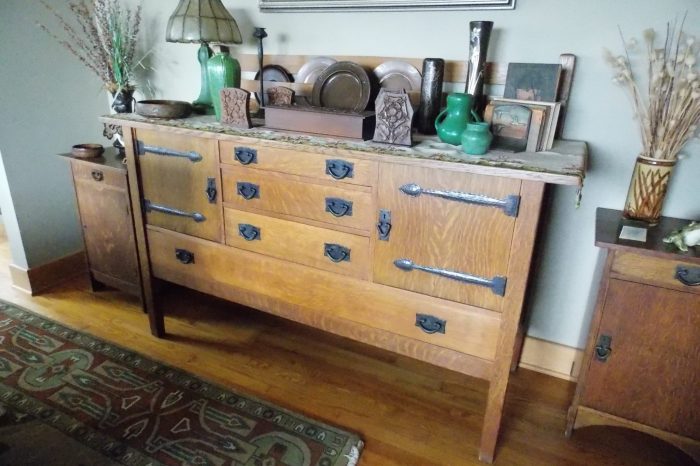