Why a Conference Catalog?

Why a Conference Catalog?

For the past 27 years, the month of December and the holidays in and around it have always had to share time with the Arts and Crafts Conference Catalog, as the deadline for all of the agendas, articles, and advertisements falls in this month in order for the printer to be able to organize, print, and bind each year’s catalog in time for the February 21-23 national conference.

And like many aspects of the Arts and Crafts Conference, there is a story behind the first Conference Catalog. In the summer of 1987, when I first approached the management at the Grove Park Inn about the possibility of hosting an educational conference and antiques show for Arts and Crafts collectors, they asked me how many people I thought might come. I silently counted my short list of Arts and Crafts friends and the number of antiques dealers I knew, then doubled that number and rounded it up. “Seventy-five,” I offered.

They were ecstatic. A group of 75 in the month of February was more than they had hoped for. Turns out their other major event that month was a tournament held by the Asheville Chess Club. Not too many big drinkers there ….

The special events manager was so excited that she offered for the Grove Park Inn to provide a small booklet for every attendee with the schedule of daily events, information on dining, and an article I would write. I was pleased and went about contacting antiques dealers and spreading the word about the event.

I thought everything was set until January, just six weeks before the first Arts and Crafts Conference, when I received a phone call from the special events manager. “We can’t do the booklet,” she announced. When I asked why, she replied, “Because nearly 300 people have signed up.”

I don’t recall there even being a question as to what to do. I simply hung up the phone, talked to a couple of local printers, and decided I would publish a 24-page, stapled, black-and-white catalog for the conference. I was fortunate in that several of the antiques dealers stepped forward and placed enough ads in the Conference Catalog to pay for the cost of printing those first 300 copies, each with a cover photograph of the 1913 Roycroft clock that still stands in the lobby of the Grove Park Inn (pictured).

Twenty-seven years later the Arts and Crafts booklet has evolved into an 88-page, full color, perfect-bound Conference Catalog. It still contains the daily agendas (that now require six pages instead of one), information on dining, and articles I write, but has grown to include biographies of each of the speakers, complete lists of the 125 exhibitors (both antiques dealers and contemporary craftsfirms), names and locations of our daily Small Group Discussions, information on the educational exhibits by Craftsman Farms, the American Art Pottery Association, and others in the Great Hall, plus walking tours, house tours, and information on the Asheville Art Museum exhibition and reception.

And while there have been many Christmas afternoons when I could be found in my office cutting and pasting ads or writing articles for the Catalog, I have never wavered in my decision, for long after our memories have faded, we each have a permanent record of those years we attended, which speakers we heard, what discussion groups we sat in on, and what exhibitors we met.

For us, these Conference Catalogs are a memento, but perhaps a hundred years from now a researcher, intent on learning more about this Arts and Crafts Revival we have sparked, will be pouring over our catalogs, exclaiming to the person next to them, “Look! Here it is. In 1992 she was exhibiting at the Grove Park Inn…. and Robert Judson Clark was a speaker! Wow! Look at this line-up. Can you imagine what it would have been like to be there?” 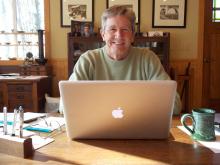 It's Not Just About Christmas, You Know...