13,280 Reasons Why the Silent Auction Matters 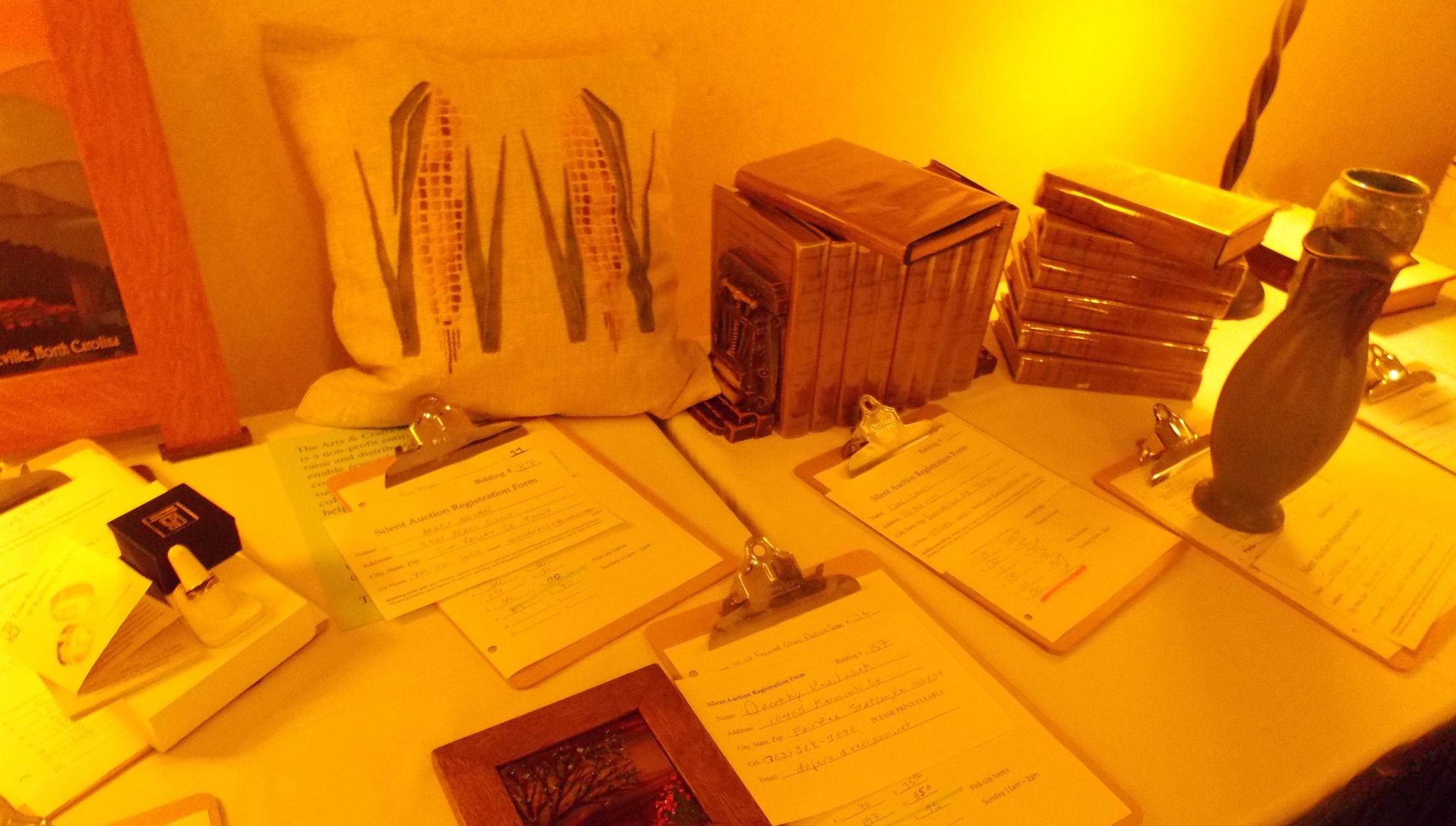 13,280 Reasons Why the Silent Auction Matters

Ah, the Silent Auction. Since 2006, it’s arguably THE event during the National Arts & Crafts Conference. Time to act like you don’t care, even though you can’t see how you will live another day without that Weller vase. “Be vigilant, set a high bid in your head and check back every few hours.” These were my thoughts when I saw this year’s Silent Auction being set up, this being my first time at the conference, plus my first auction of any kind.

It began with a few packages arriving in the mail before the conference: a beautifully embroidered corn pillow by Prairie Textiles; a stunning contemporary vase by Paul Katrich that looked like a 3D incarnation of Van Gogh’s Starry Night; pottery, tiles, artwork, and, yes, olive oil. Now, olive oil may not fit the usual silent auction objects, but what a fun inclusion — and unpacking those Tenalu bottles from the family farm in Springville, California made me positively salivate.

During the week of the conference, I was introduced to Katie, a seasoned veteran of the auction, having managed it expertly since its inception. The measurement of her successful arrangement and organization can be judged by the amount of fingerprints left on the glass elevators walls as guests pointed and plotted while being slowly lowered to the 8th floor where the silent auction stage was in full view. During that ten-second journey, I’m sure some were eyeing the mica lamp, prints and posters beautifully framed, and the Gustav Stickley sewing rocker.

Me? I was all about that olive oil.

As Saturday’s closing bell approach, Katie handed me a highlighter and told me to be ready. Ready for what I wondered? I quickly found out. The scramble I witnessed those last ten minutes was thrilling, if not a little frightening. 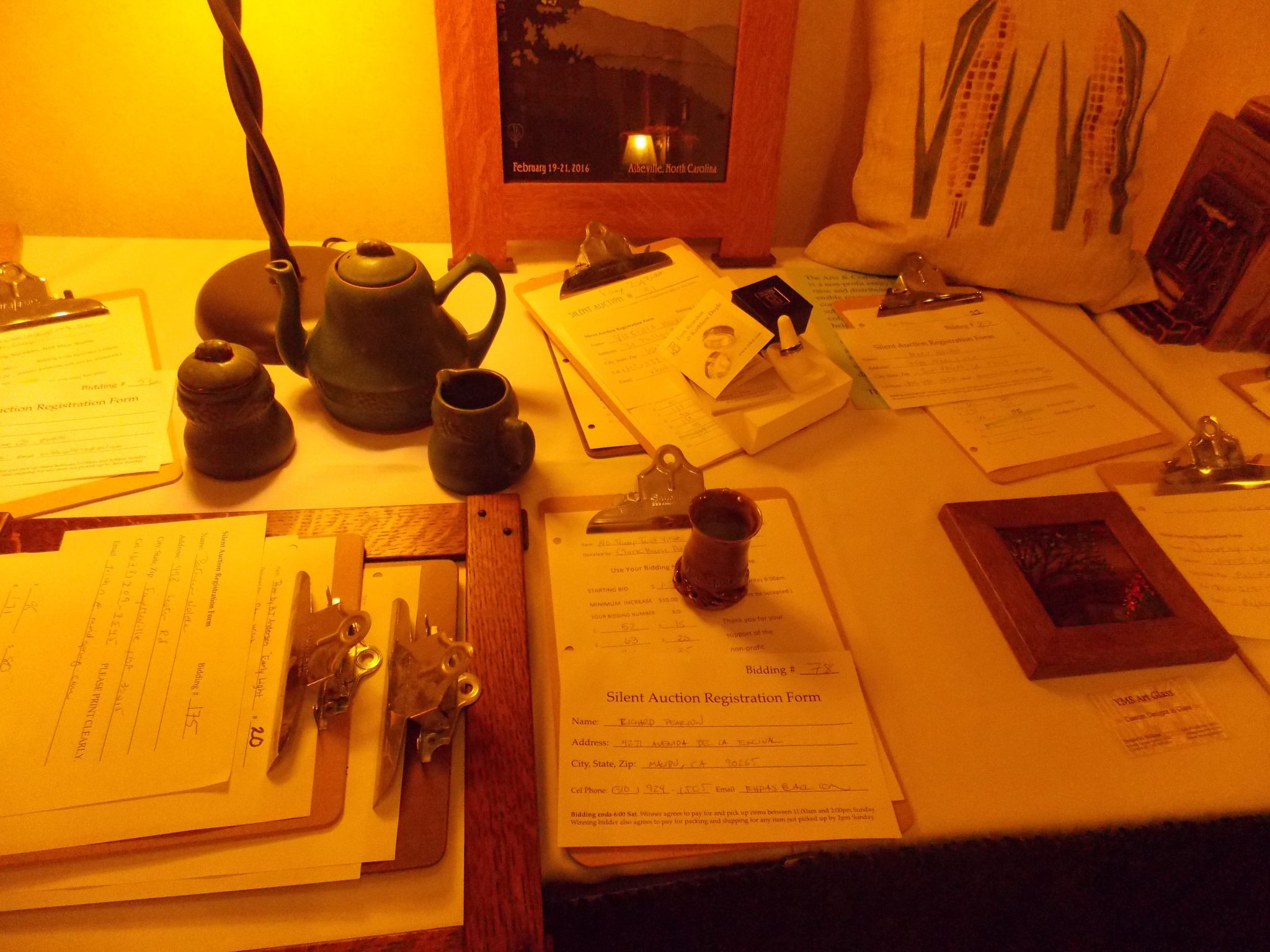 While everyone was friendly (as I’ve learned all Arts and Crafts folks must be) I was wide-eyed at the man and woman standing across a vase from each other, each calmly picking up the clipboard and increasing their bid, putting the clipboard back down for the other to pick up, then repeating it at least five times. What was remarkable was that they were, in fact, totally silent. And they never looked directly at each other.

Always one to avoid conflict, even the silent kind, I wanted to stop them and tell them to just put down their highest price and stop this abuse to the clipboard, but they didn’t seem offended by each other in the least. I have not the emotional maturity to enter such an auction. I’d have been in tears, or called a fellow bidder a “capitalist” or other equivalent insult. I guess its best that I just work here. 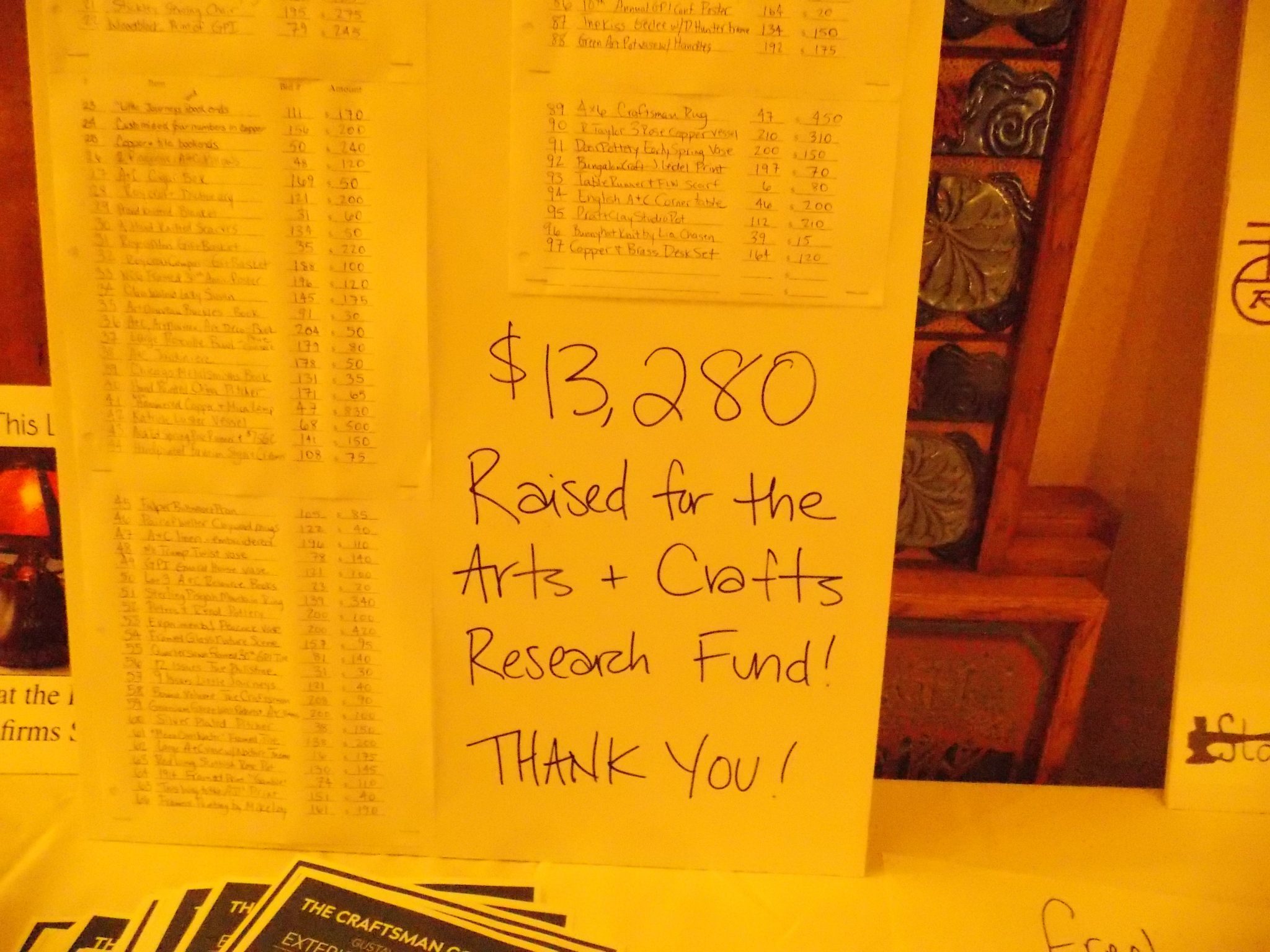 This year’s 30th Annual National Arts and Crafts Conference was the most successful yet with $13,280.00 raised from over a hundred bidding items donated by the 97 best collectors, dealers, artists and enthusiasts of Arts and Crafts in the world. The money raised will go towards the Arts and Crafts Research Fund, which in turn, will provide grants to worthy organizations and individuals who need such funding for research.

What about you? Do you have a research project in mind that would benefit the Arts and Crafts community as a whole? If so, consider applying for a grant from the Arts & Crafts Research Fund.

Send a typed two-page proposal including the following information:

1.) A one-paragraph summary of your research project;

2.) Tell us why you think it is important;

3.) Explain the present status of your research;

4.) Provide some background on yourself;

5.) What amount you are requesting and specifically how you would use this amount;

6.) And any other pertinent information. Photos are encouraged.

To learn even more, please go to:

Then mail it to:

The Arts and Crafts Research Fund

See you at next year’s Silent Auction!