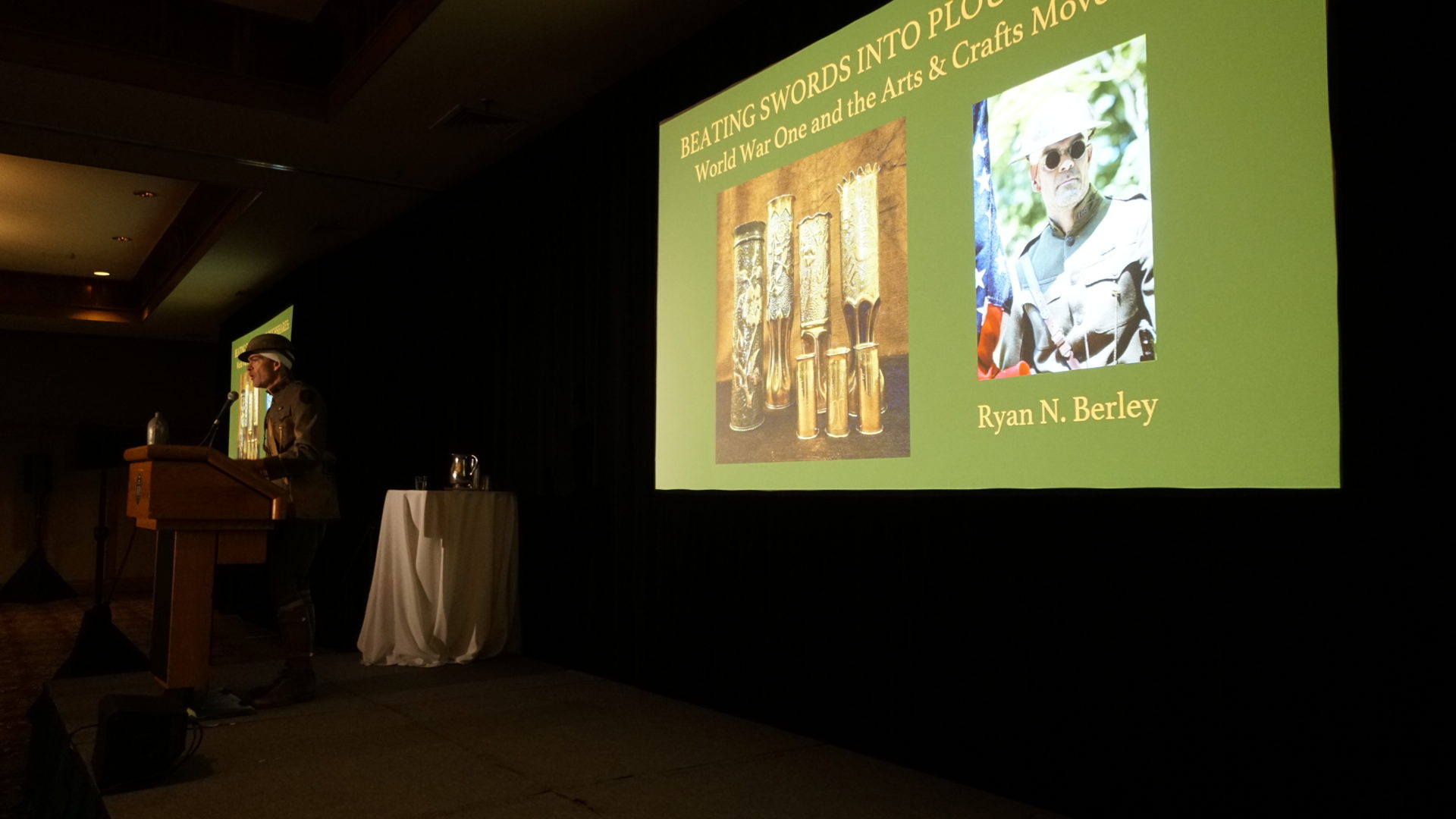 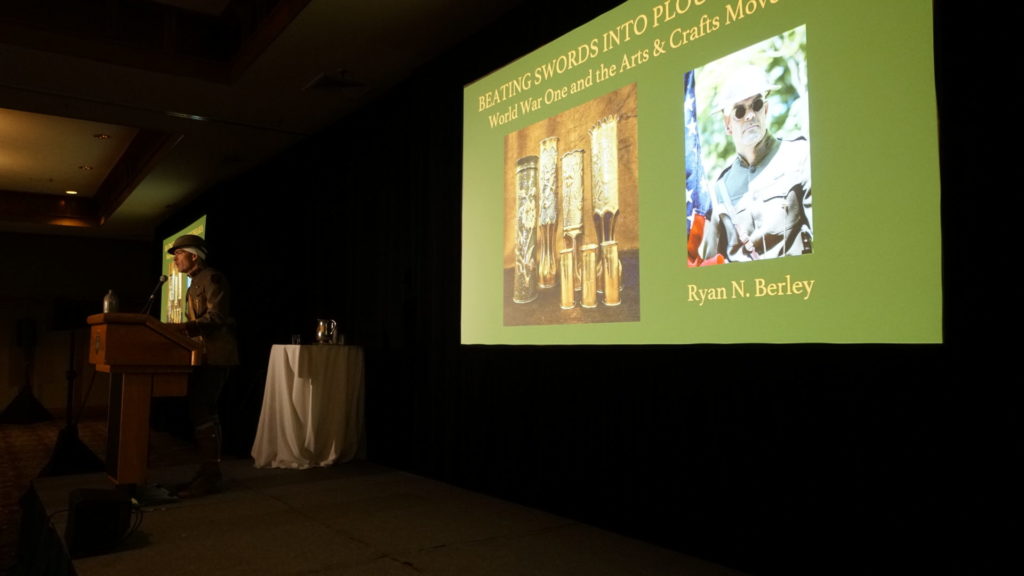 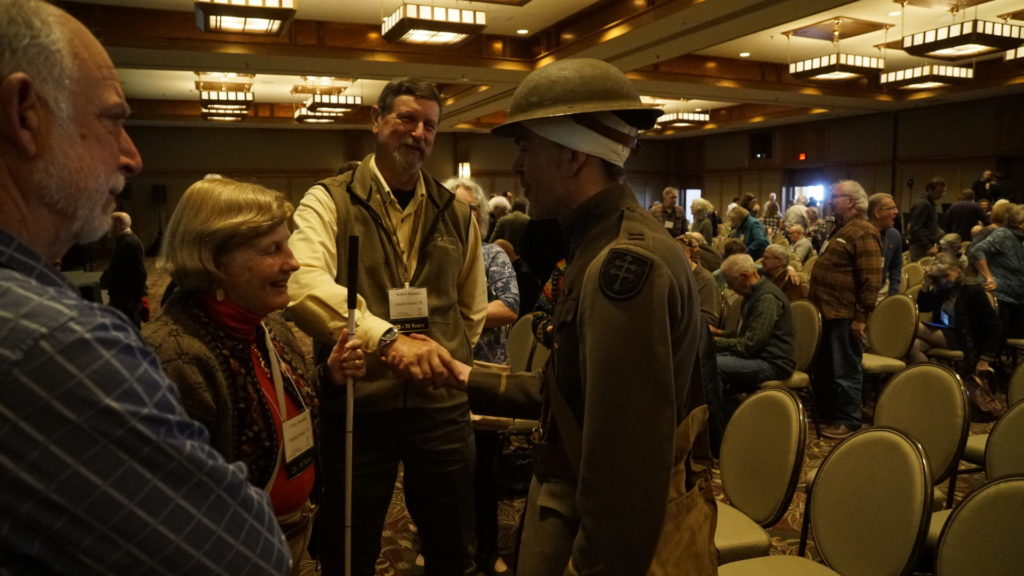 Above: Ryan Berley of Ryan Berley Applied Arts and the Rose Valley Museum of Thunderbird Lodge presents his seminar on wartime arts and crafts, “Beating Swords Into Ploughshares: World War One and the Arts and Crafts Movement.” Afterwards, he’s greeted by those in attendance. Photos courtesy of Ray Stubblebine.

The tradition will continue this upcoming February, as we have listened to our supporters express interest in learning more about the items we collect and the artists and artisans who designed and created them more than a century ago. This year, our topics will continue to reveal stories of lesser-known artisans and craftspeople and explore the many evolving avenues of how the movement has inspired home design from a historical view and the influenced of the current revival of the movement. From delving into the life of a lesser known Stickley brother to studying the evolution of a popular art pottery firm to understanding the lives of women artists and craftspeople of color who paved their own way in the early 20th century, 2022’s lineup of educational seminars will educate, entertain and deepen your understanding of the far-reaching influence of this movement.

Listed below are the chosen speakers and topics for the 2022 National Arts and Crafts Conference. 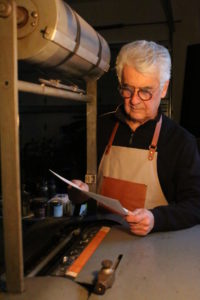 Andre Chaves of The Clinker Press will present on the evolution of Arts and Crafts Design. Image courtesy of Andre Chaves.

The Evolution of Arts & Crafts Design

The Life of Albert Stickley 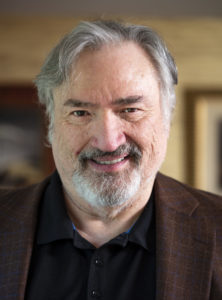 Dr. Tom Folk will present the tragic life of Juanita Gonzales, a Newcomb Pottery artist and a master ceramist in her own right. Photo courtesy of Tom Folk.

New Orleans-born Juanita Gonzales came to Newcomb College in the 1920s as a new teacher and would cement her legacy as both an influential figure at Newcomb College, an artisan at Newcomb Pottery with a unique style, and as a master ceramist in the development of glazes and enamels. Author and Decorative Arts appraiser Tom Folk will reveal the life of the lesser-known Juanita Gonzales in images, research and stories from Gonzales’s family in “The Tragic Life of Juanita Gonzales: Newcomb Pottery Visionary.”

Photography in the Arts and Crafts Era is a relatively unexplored topic, but what about women photographers? The contributions of turn of the century photographers Anne Brigman, Imogen Cunningham, and Adelaide Hanscom are explored in this presentation of women who dared to carve their own way into the field of photography and inspired other women to use cameras as an art form and as a means of self-expression. Scholar and Author Susan Ehrens will present “The Notorious Women Photographers of the Arts and Crafts Movement.” 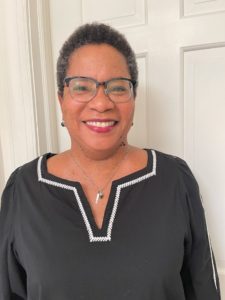 Elaine Pinson will present in 2022 on how the African American industrial education movement had commonalities with the Arts and Crafts movement with her exploration of “The Dignity of Labor.” Image courtesy of Elaine Pinson.

The Dignity of Labor

The Arts and Crafts Movement rejected industrialization and attempted to bring respect back to the world of hand-crafting in the early 20th Century. Simultaneously, the African-American industrial education movement sought to claim dignity for labor and a better life as a result. The parallels between these two movements will be explored as Elaine Pinson will take the stage at the Grove Park Inn to present “The Dignity of Labor: African American Connections to the Arts and Crafts Movement.”

Where Art and Craft Meet Technology

While Rookwood pottery started and flourished during the Arts and Crafts era of design, the famed pottery firm transitioned into the 1920s with a greater demand and a new era for the company. Dealer, collector, appraiser and Director of Ceramics at Toomey & Co Auctioneers Riley Humler will explore Rookwood Pottery created in the 1920s and the firm’s processes for keeping the legacy going during a decade of change.

To see our updated schedule, including the times and dates for all seminars, please visit our website arts-craftsconference.com. 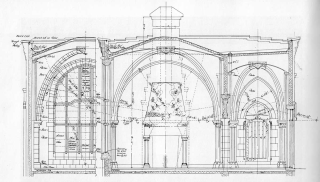 The Spirituality of Charles Greene and the Origins of a Stickley Utopia: Two Virtual Classes and a Craft Show This Saturday