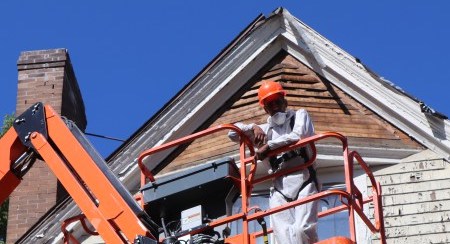 Thanks to Patricia Rycraft O’Toole for this update:

Construction is under way to restore the historic Gustav Stickley House on Columbus Avenue in Syracuse, NY. 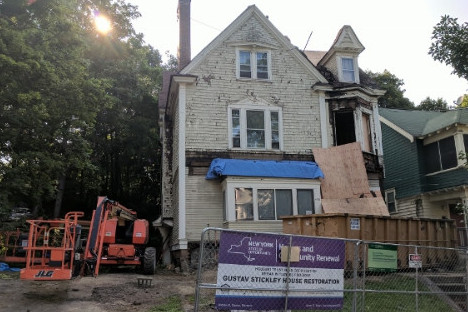 A Restoration Kickoff Event, co-sponsored by the University Neighborhood Preservation Association (UNPA) and the Gustav Stickley House Foundation Inc. (GSHF) was held Thursday, August 17th. The event took place on the sidewalk in front of the house, 438 Columbus Ave., as construction workers were already beginning repairs to the roof and siding.

“This represents a tremendously important moment in the history of the Stickley house and the effort to restore the house,” said Elizabeth Crawford, senior designer and project manager at Crawford & Stearns, Architects and Preservation Planners, PLLC, architects for the project. 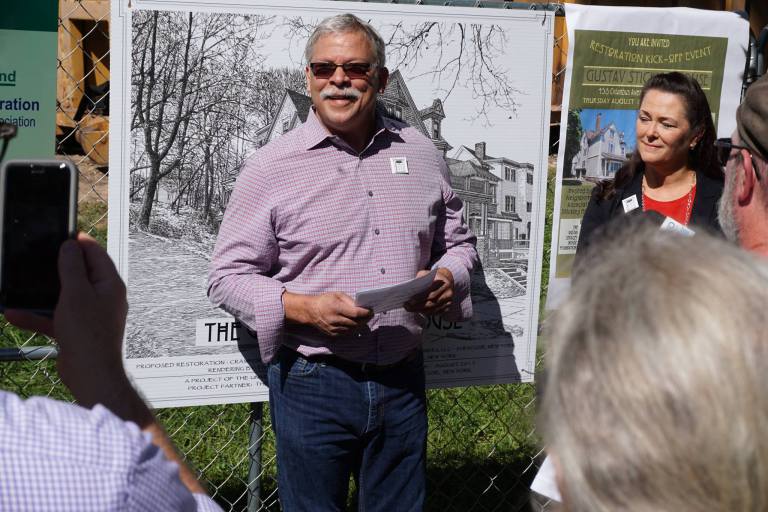 “This is a really special day, a day I personally have been waiting two and a half decades for,” said David Rudd (above), president of the Gustav Stickley House Foundation, owner of Dalton’s Decorative Arts, Syracuse, and a nationally recognized expert on Gustav Stickley furniture and the Arts & Crafts movement.

Among those attending the event was a very special guest, Gustav Stickley III, Stickley’s grandson, who toured the home and shared his memories of his famous grandfather.

“It’s a very warm, gratifying feeling to see the recognition he is receiving for his work,” said Stickley, age 85. “I wish so much he could be enjoying it today. He earned it.” 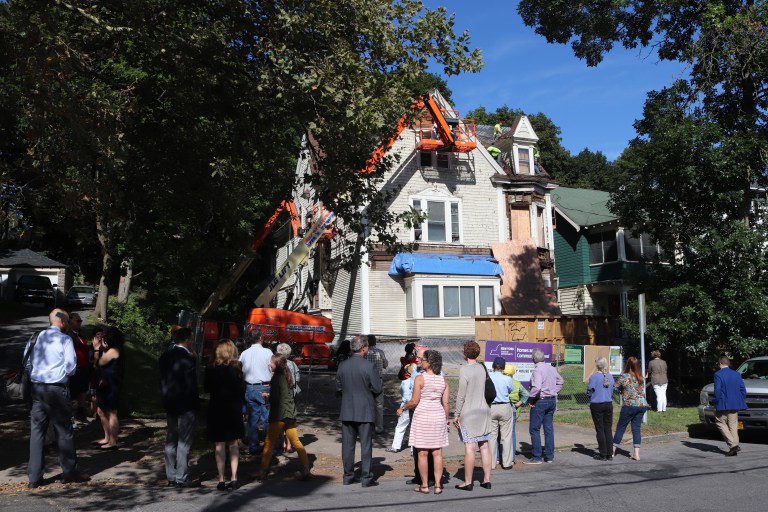 Phase One of the project, restoration of the exterior, began the week of August 14th. The first phase includes repairs to the siding and trim; window restoration; a new roof; asbestos abatement, reconstruction of the original front porch and completion of a historically accurate paint scheme that was determined by analysis of paint layers on the house. Exterior work is expected to be completed by the end of this year.

Neighbors of the house and other supporters of the project were also there to celebrate the start of renovation work. Doug Reicher was there because of his special connection to the house. His great-grandfather, Isaac Fleischman, president of Fleischman Furniture, bought the house from Gustav Stickley in 1911 and sold it back to Stickley’s daughter Barbara and her husband in 1919.

Gustav Stickley lived in the house from 1900 to 1905 and then returned there to live with his daughter’s family from 1919 until his passing in 1942.

Shortly after Stickley first moved into the Queen Ann style house with his wife and children, a fire on Christmas Eve 1901 caused significant damage to the home. Stickley redesigned and reconfigured the home with a new Craftsman interior, the first of its kind in the nation.

The house is listed on the National Register of Historic Places and is a designated Protected Site under the City of Syracuse local preservation law. The first floor of the house remains relatively intact as designed by Gustav Stickley.

The Gustav Stickley House Foundation, a non-profit organization, is also raising funds for the project. At the event, the foundation announced its “Community Campaign for Completion,” a campaign to raise $35,000 towards completion of Phase One. The foundation has already received a commitment of $5,000 in matching funds from its board members. Information for making a donation appears on this website: .http://gustavstickleyhousefoundation.org/donate/

GSHF, which serves as an advisory board regarding the preservation, is raising funds to ensure successful completion of the restoration as well as on-going use and maintenance of the house. GSHF will also be is actively pursuing fundraising through various preservation grants, corporate sponsorships and private donations for Phase Two of the project – which will focus on restoration of the historically significant interior.

Plans to restore the Gustav Stickley House were made possible when its previous owner, the furniture company of Stickley, Audi and Co., donated the house to UNPA, which has been overseeing Phase One. Once the exterior work is completed, ownership will be transferred to the Onondaga Historical Society (OHA), which will complete the Phase Two interior restoration. 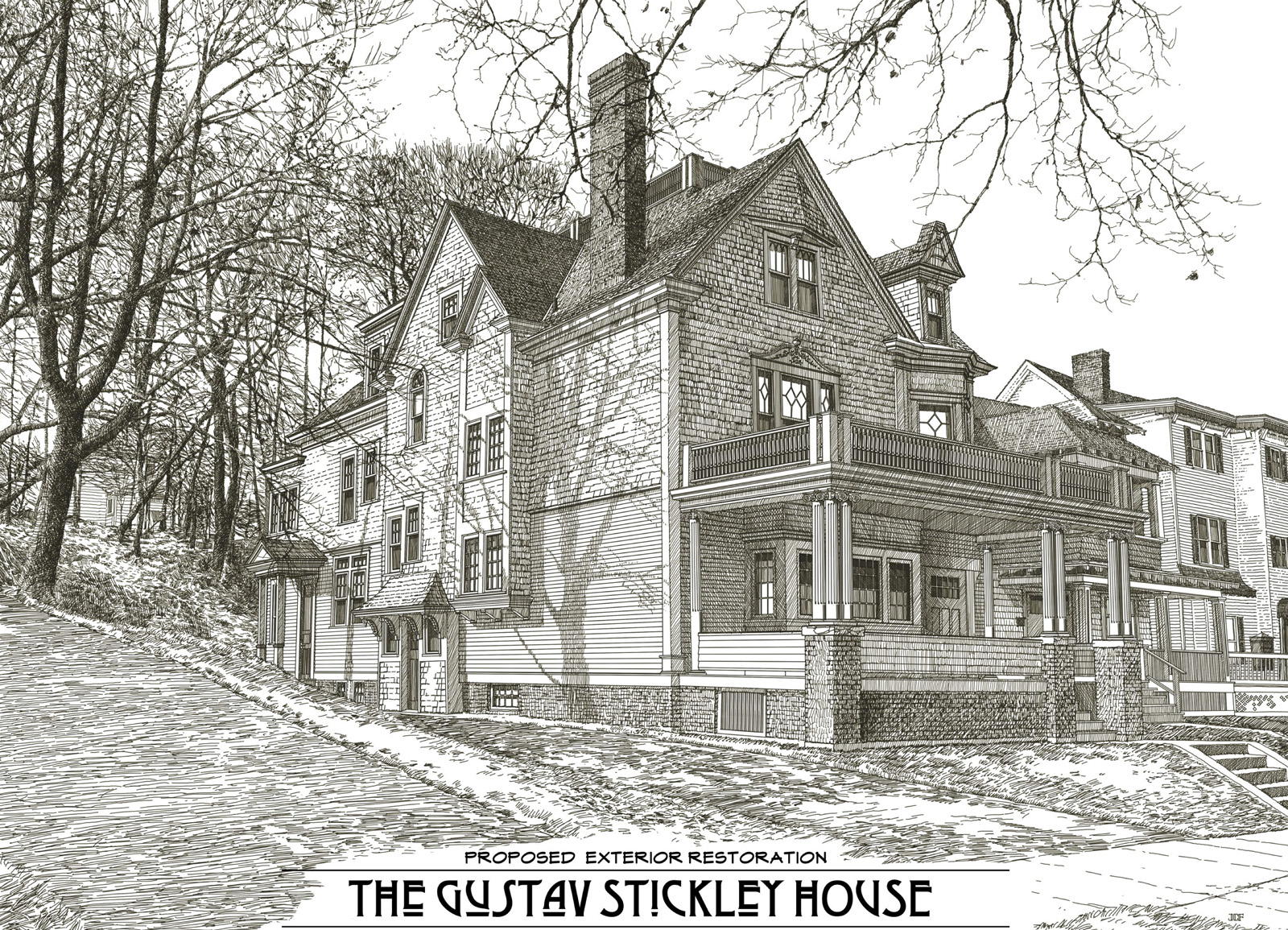 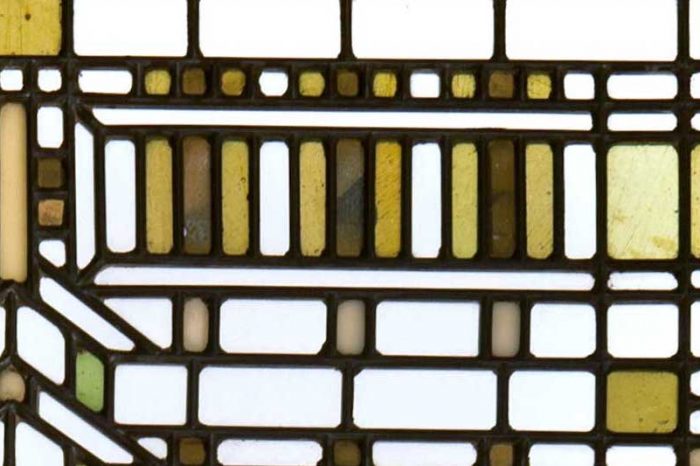