Important Ceramic Works Up for Bid at Rago’s Thursday Auction 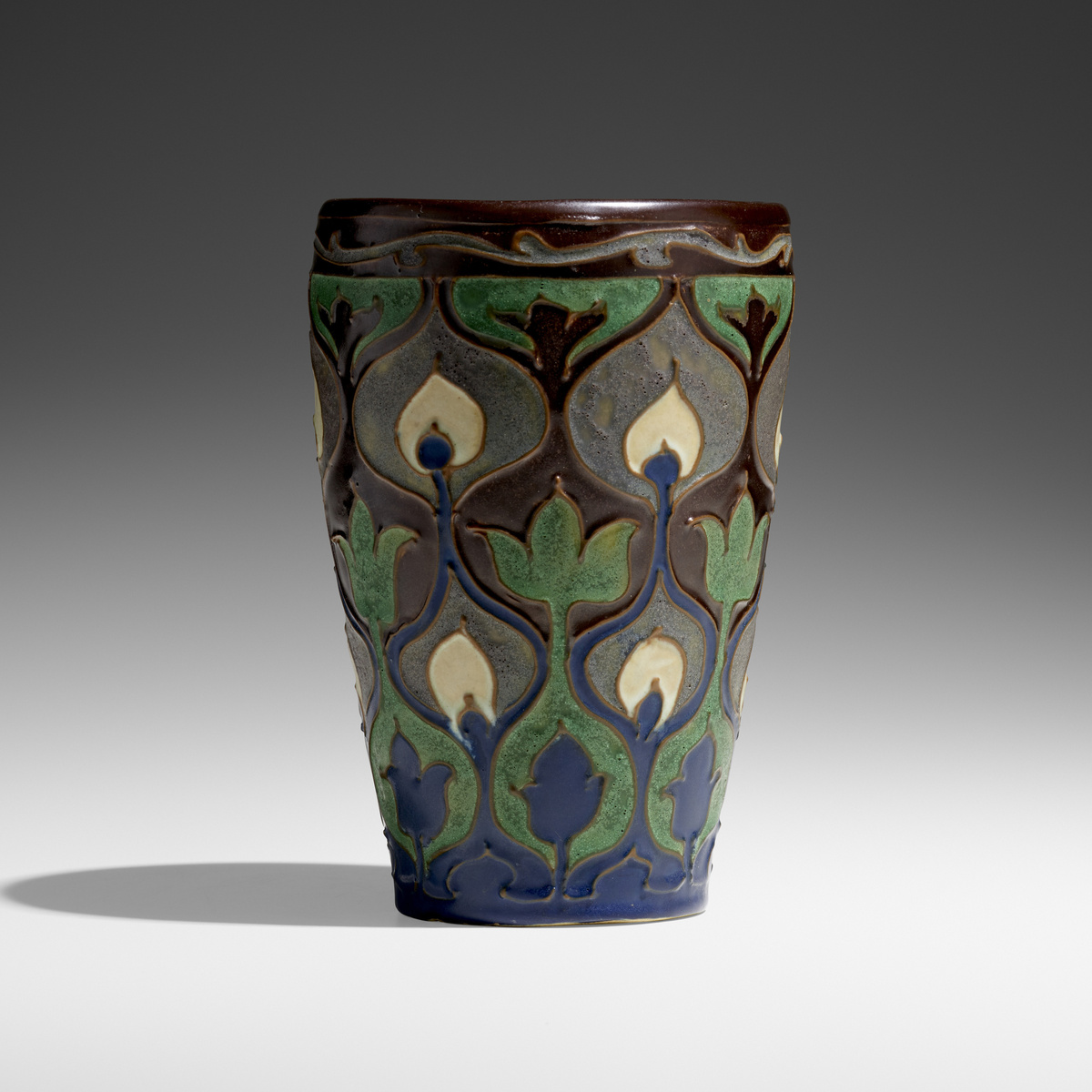 Important Ceramic Works Up for Bid at Rago’s Thursday Auction

In a 347-lot auction, Rago’s Art and Auction Center presents the Early 20th Century auction starting at 10:00 am Eastern. The auction will present a curated sale of early 20th century American and European design, lighting, and decorative arts. Featuring exceptional works by leading makers of the era including an important Ipswich vase by Marblehead Pottery, Ohr pottery from the Estate of Martin and Estelle Shack, lighting by Tiffany Studios, furniture by Gustav Stickley and Süe et Mare, and rare works by Frederick Hurten Rhead, Grueby, and Taxile Doat.

In keeping with the principles of the Arts and Crafts movement, New Orleans’ own Newcomb College produced unique handcrafted works, often depicting local floral and fauna of the south. The clarity and crisp floral designs of early Newcomb College works are well represented here in varying shades of blue, green and yellow – like Mazie Teresa Ryan’s cinquefoil patterns on a glazed earthenware covered jar ($4,000 – $6,000) or vases by Anna Frances Simpson depicting pine trees, Spanish moss, and full moons ($3,000 – $4,000) or her transitional vase with lilies. 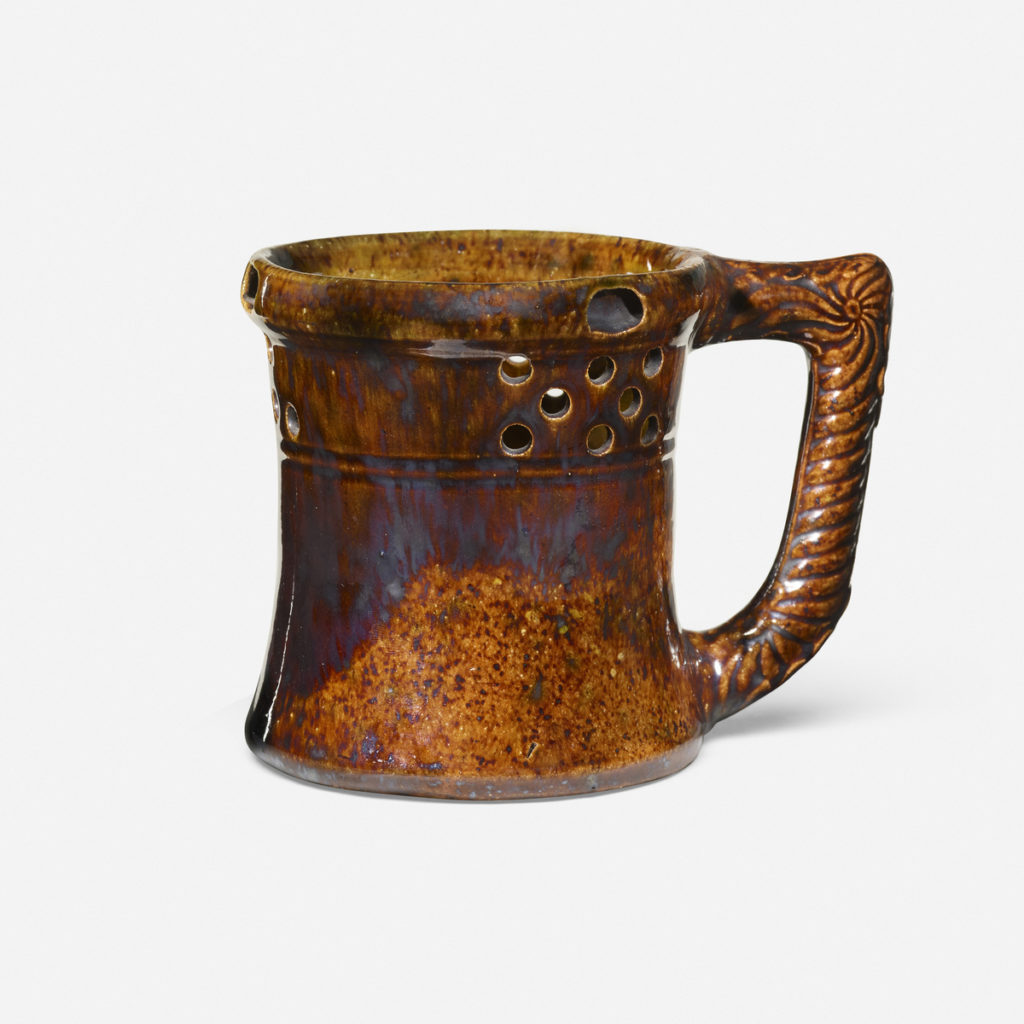 One of several George Ohr puzzle mugs offered in this auction, this example ($900–1,200) is one of the few No Reserve lots available during the May 12th auction and is additionally sold with two books; copies of The Unknown Ohr by Robert Blasberg and The Mad Potter of Biloxi: The Art & Life of George E. Ohr by Garth Clark, Robert A. Ellison, and Eugene Hecht. Photo courtesy of Rago Arts and Auction Center. 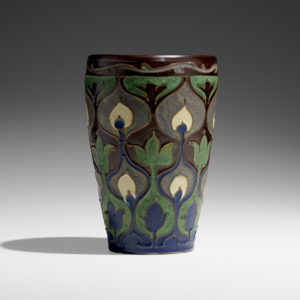 As auctions at Rago are infamous for showing works from George Ohr, the May 12th sale is no exception. Offering a range of pitchers, vases and puzzle mugs, the eccentricity and creative design of the Mad Potter of Biloxi is represented in these 33 works – among them several bisque earthenware works, unique puzzle mugs, colorful representations of his unique vases, and even a No Reserve lot of a brown and green customized mug with a quote by Ohr’s own hand. Susan Frackelton has said of Ohr’s works: “With this great strength has has extraordinary delicacy, and the two make him a master potter. The clay seems to be a living, breathing thing under his manipulation.”

A collection of 13 items from Grueby Faience range from the beginner’s collection (a Grueby Faience vase with leaves and buds ($1,800 – $2,400) to tall vases with lilies ($10,000 – $15,000) and small vases with daffodils and leaves ($4,500 – $6,500) to the rare/early and impressive Grueby works; an “exceptional” floor vase ($18,000 – $24,000) which was exhibited at the 1900 Exposition Universelle in Paris and has been shown in three different prominent publications featuring Grueby, is an impressive lot that will be up for bid while a rare and early bi-color gourd vase with leaves featured prominently on the website for this very auction is estimated to sell from $30,000 – $40,000.

Also highlighted on Rago’s website are two vases from influential potter Frederick Hurten Rhead; one an oxblood vase ($1,500-$2,000) and the other an important and highlighted vase made with five different glaze colors created during his time at Arequipa pottery. This arabesque vase was the largest of his decorated pieces to have survived this small collection of works created with smaller equipment with impressive techniques. The quality of the survived work is incredibly impressive in its unblemished nature. 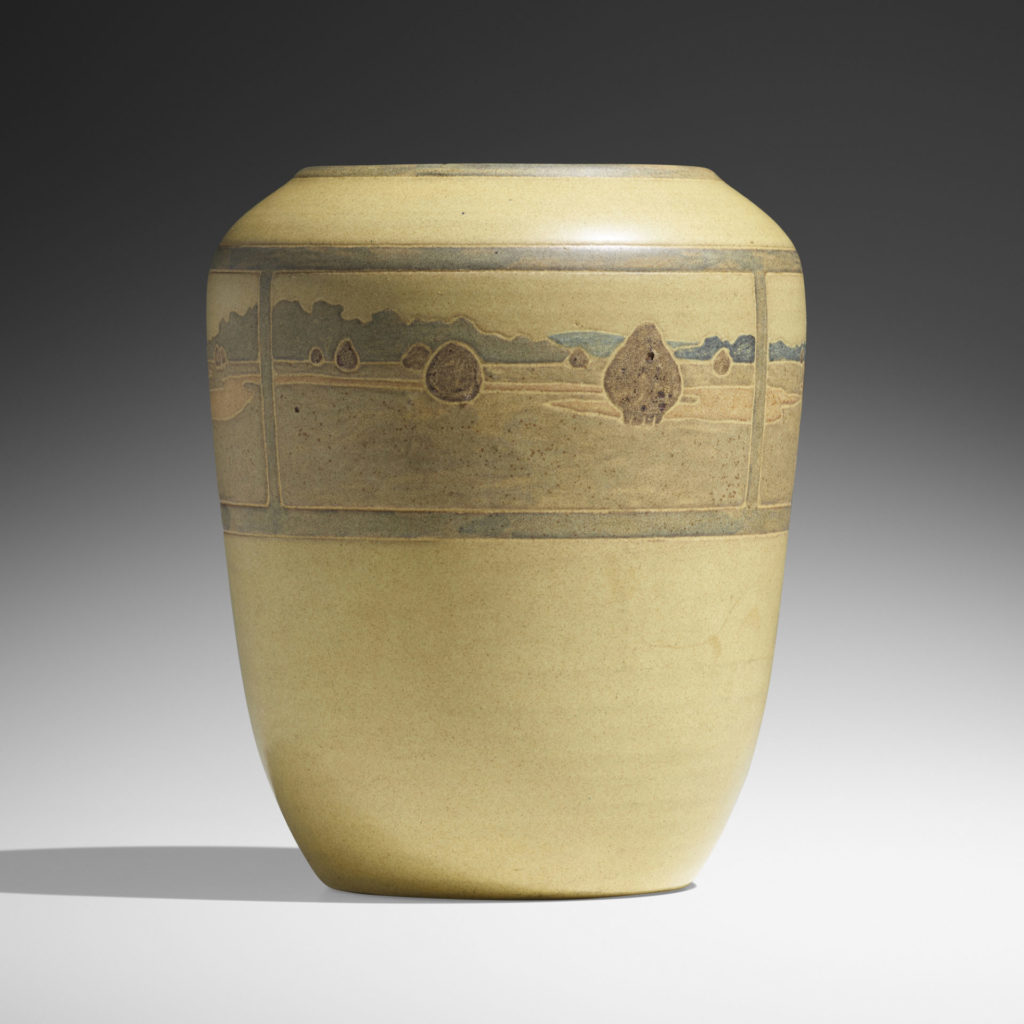 And then there was Marblehead…one of the more high-selling pieces of this auction is bound to be this highly published and important Ipswich vase by Marblehead designers Annie Aldrich and Sarah Tutt ($150,000 – $200,000), one of only a few known examples of this model. Coming from the collection of Edith Anna Parker Goldthwait, its home for three entire generations, this vase was either purchased or given from Marblehead pottery’s founder Dr. Herbert Hall as a result of allowing Dr. Hall to use the family mansion as a sanatorium in 1912. Two other examples of this vase are in permanent collections including that of the Two Red Roses Foundation and the Art Institute of Chicago.

For information on bidding during Thursday’s auction, please visit ragoarts.com 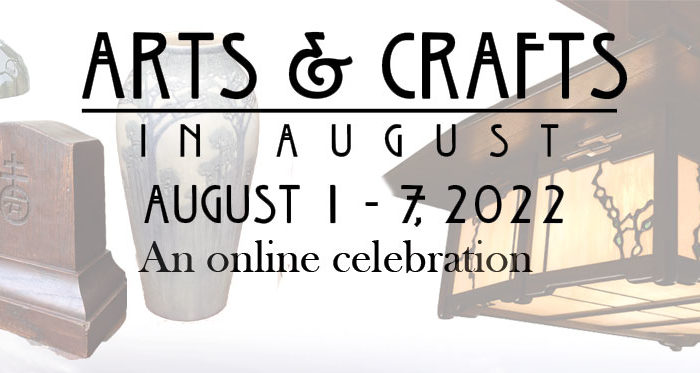