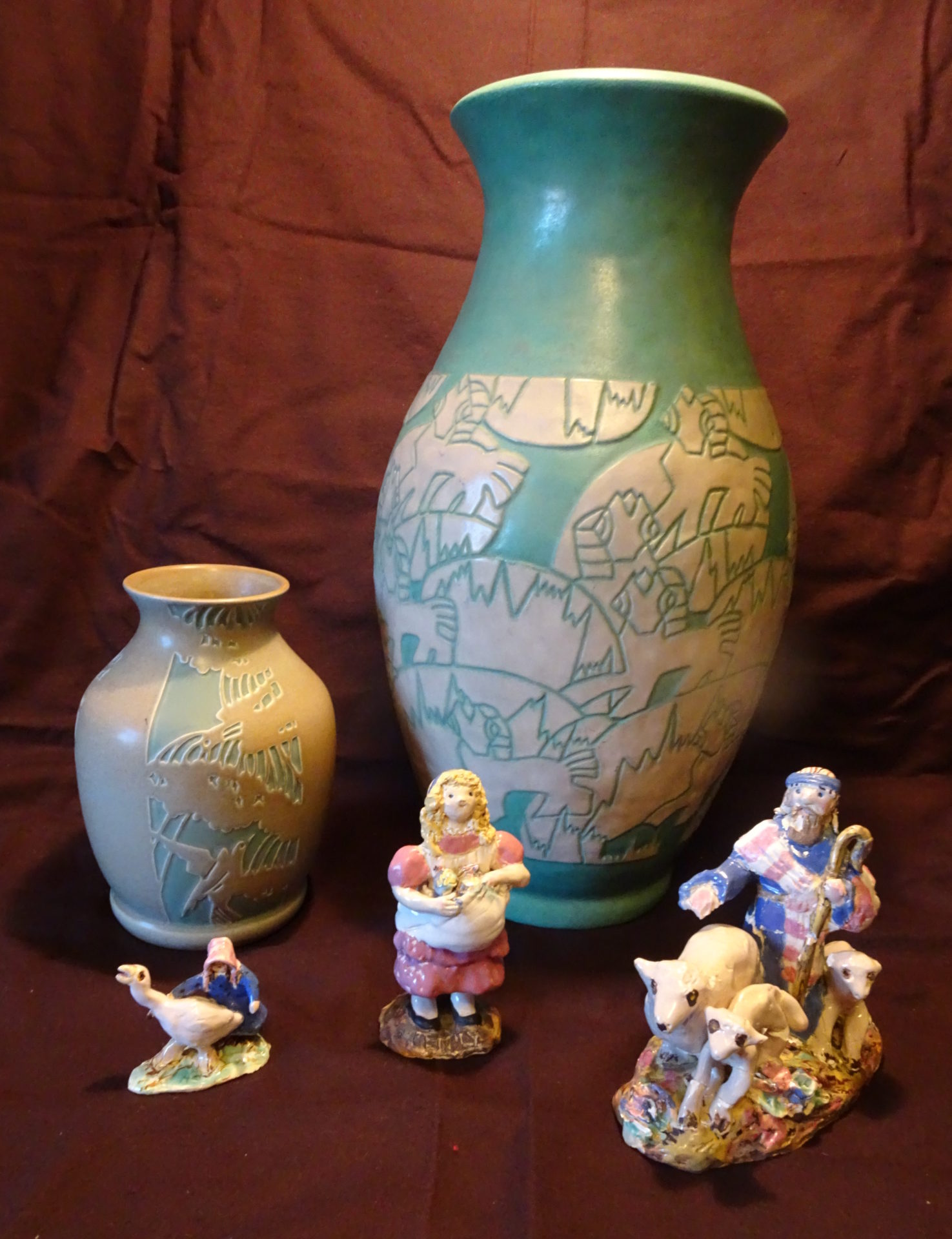 For more than five decades, Robert Ammerman has been a collector of both the works of both Overbeck Pottery and stories about the not-so-worldly-known Overbeck sisters. The five sisters, four of whom made up the operations of Overbeck Pottery, turned their small house in Indiana into their own pottery workspace creating works that six years later, would be shown in exhibits alongside their far larger counterparts in art pottery. But it’s more than that for Rob. He has a family connection to the sisters: his grandmother was a friend of the sisters and his uncle took art lessons from Mary Frances Overbeck. Bob calls those sisters “hometown heroes” having grown up on a farm near Cambridge City and was a part of the community present for the growing popularity of their pottery in . After serving in a ministry and serving as a letter carrier, he went on to befriend the author of Chronicle of the Overbeck Pottery, led a symposium on the Overbeck sisters, and has had several public displays of his collection.

His upcoming talk at the American Art Pottery Association Convention in Blue Ash, OH entitled “Overbeck: the Forgotten Pottery” will delve into the lives of each of the sisters, the categories of their works, the glazes and techniques that are representative of their skills, and how to distinguish between genuine and fake Overbeck pottery.

But don’t call him an art pottery expert. He just loves the Overbecks and collecting their pottery. 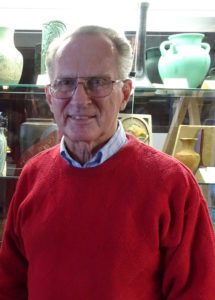 ACC: First of all, when did you start to collect Overbeck and come to know of their legacy?

Bob: I grew up in the Cambridge city area where the Overbeck sisters were. I grew up with the idea of keeping things. I started out thinking I was going to start collecting every pattern of Roseville pottery and that was 55-60 years ago, back when things were six, seven, eight dollars. Even then it wasn’t practical and I would never be able to achieve that goal. Then the Overbeck estate auction happened in June of 1965 and I was in college at the time — but was home for that. It suddenly dawned on me that not everyone could collect something made in their hometown, so I gradually through the years picked up things as we could. We’ve lived with a fairly modest income most of our life, but I’m just grateful for the things that I’ve had and I’ve just continued the interest in Overbeck all these years.

ACC: Do younger generations today know about the Overbecks even in the Cambridge area?

Bob: I know back in the day, everyone knew the Overbecks and everyone in Cambridge had at least one of the figurines. Some couldn’t cared less but as the years have gone by, I think now there’s the element of pride in the Overbeck sisters and pottery. A lot of the younger generation are not into collectibles and antiques, so they’ve heard the name but it doesn’t mean anything to them. After the estate auction in 1965, that was a shock to local residents. All these people came from several states around for this auction and we locals couldn’t believe the attention. We were in shock with the prices that were paid that day. In the last few years, there has been an uptick in newer activity and newer collectors in the market have been starting to buy things. The prices that had leveled off are picking back up again. Now the local collectors here have been more familiar with figurines and not many of the vases. There aren’t many vases that come on the market anywhere, let alone here. It’s been interesting to see the contrast. I have to laugh because I had the chance to buy the larger pottery and because I thought the figurines were the real Overbeck, I missed my chance! I finally woke up to those vases back when they would sell for a few hundred dollars instead of a few thousand dollars like today.

ACC: Since you have a deeper, more prideful connection to the Overbecks, how does that change your view as a collector?

Bob: Because they were the hometown heroes as well as appreciating their work, local collectors are looking for the rare figurines, the customized figurine. Anything that comes on the market that’s different looking, prices will go up on those. I think some people are buying for investment, but some folks still have so much pride for the Overbeck sisters as successful in their hometown. 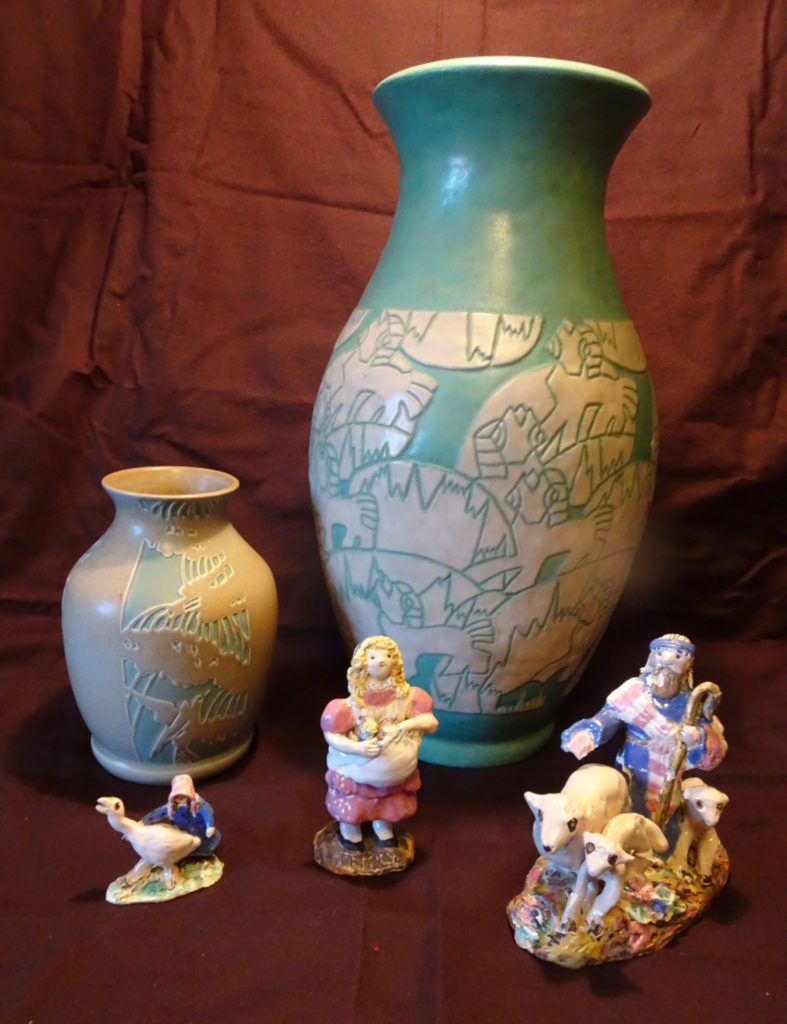 Works from the sisters Overbeck. Vases and figurines part of Bob Ammerman’s collection.

ACC: When did you decide that the Overbeck sisters were worthy of a seminar?

Bob: I’ve been doing reading of the antique newspapers and I’ve come to aprpreciate the story of the Overvbecks just because your large potteries were founded with family money or people who had money to invest in the enterprise. They had money to invest in designers from Europe to develop glazes, they had a whole organization of officers. Then at the other end, you had this small group of sisters with this small midwestern house and set up shop in this house. In just a few years time, they made these extraordinary vases. For me, that made me appreciate it so much more. Six years after they established their own pottery, their works were featured in exhibits. They were able to accomplish all that without any help, it’s really remarkable that they were able to achieve those sorts of things. Also because of their processes and their dedication to the handcrafted, they really are a perfect example of Arts and Crafts pottery both literally and philosophically.

ACC: What can viewers expect to hear in your talk?

Bob: I’ll share the environment of Cambridge City and how the Overbeck sisters grew into their skills to give some context into how they grew into the craftspeople that they became. I’ll get into the Arts and Crafts influence and then show examples of all types of works they produced. I’ll also show what museums house their collections. Given my perspective on how to evaluation early and late works of Overbeck, collectors will learn tips on comparing and contrasting the range of their works. Overall, I just want to show their accomplishments in hopes that it will whet the appetites of viewers to go see the collections and find out about these amazing sisters from a small town in Indiana. Also, how to distinguish fake Overbeck pottery from the real thing. 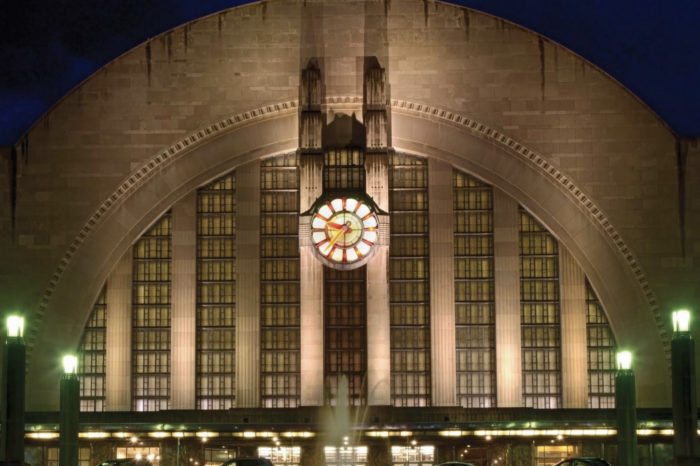 The AAPA Convention Kicks Off this Week, Auctions from Toomey and Treadway: The Week At A Glance