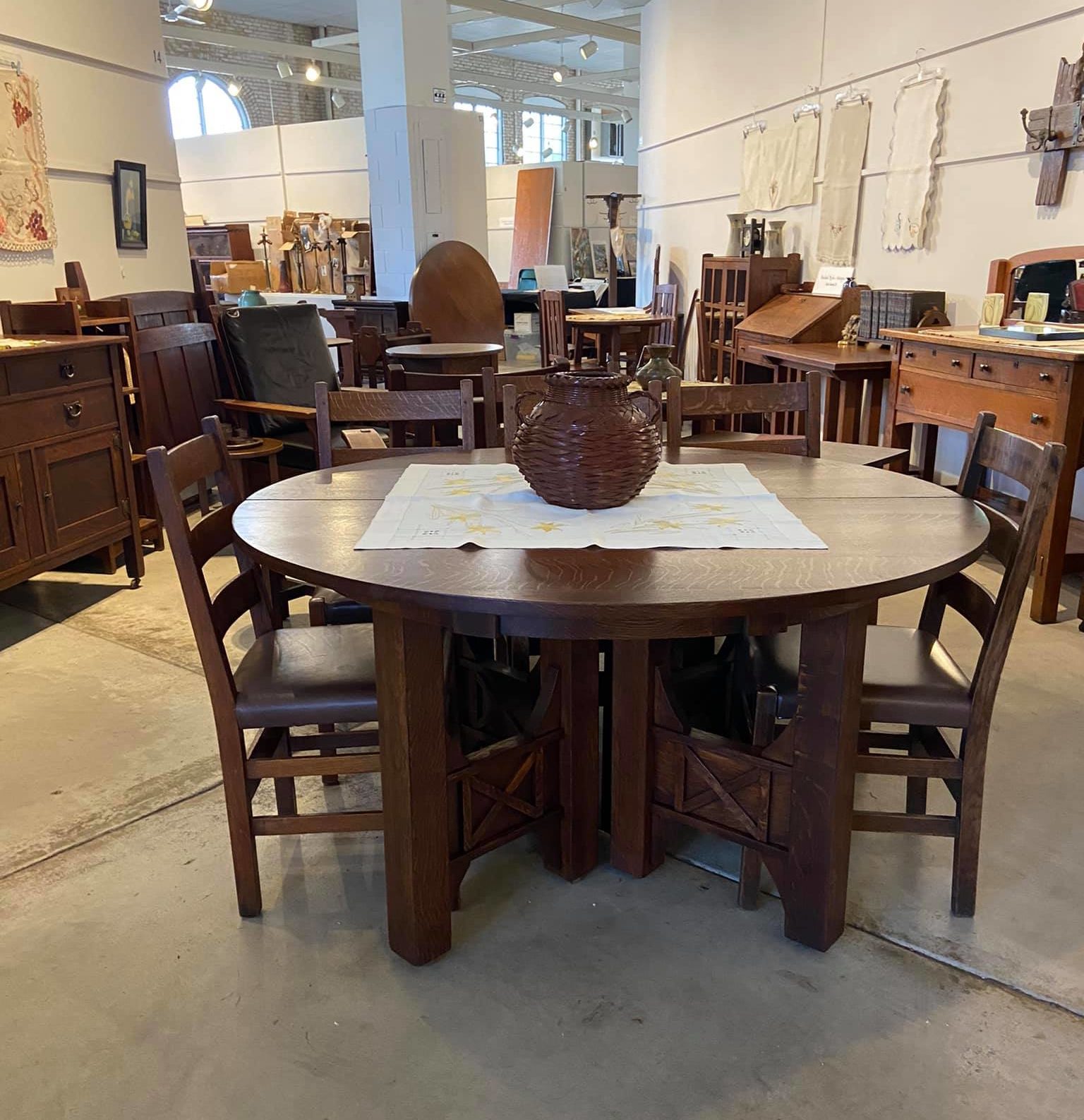 The crowds came from all over Minnesota and out of state to the capital city of St. Paul to attend an annual indoor Arts and Crafts show feeling excited and with masks in hand, felt plenty of pent-up buying power. It all culminated into a weekend full of “good weather, good people, and a good venue” according to show co-organizer Cameron Quintal of Eastwood Gallery.

St. Paul, Minnesota has been the home for the 21st Annual Twin Cities Arts & Crafts 20th Century Design Show & Sale and this past weekend, the show returned to the Minnesota State Fairgrounds for the in-person show and sale. At least twenty-five vendors offered works of the Arts and Crafts era to midwesterners attending the annual show, returning after last year’s absence. The annual show and sale remained the largest event in the Midwest region featuring mission furniture and accessories of the American Arts and Crafts Movement; among the selections offered to the excited showgoers were metalwork, pottery, textiles, art, and lighting, a wide selection that Midwestern Arts and Crafts enthusiasts took advantage of.

Cameron Quintal and Brian Smith of Eastwood Gallery in their booth at the 2020 National Arts and Crafts Shows at the Grove Park Inn. Photo courtesy of Ray Stubblebine.

Post-show, Quintal was thankful that the show ran smoothly with its optimistic showgoers and loyal vendors, but remembers the nerves at the beginning of the show weekend. “Going into it, we were apprehensive. You just don’t know how the aspects are going to directly affect the show until it happens,” said Quintal. “The feedback we’ve gotten has been pretty positive plus the public was buying and sales were good. While shows like this tend to be mainly furniture-buying shows, people walked out of the building having bought all kinds of things.” Quintal and Show co-organizer Brian Smith had a booth of their own in the show for their local St. Paul business Eastwood Gallery (you can find their website HERE), a gallery dedicated to Arts and Crafts era and 20th Century design.

In terms of safety, Quintal reported that the great majority of people in attendance wore masks and were respectful of each other’s space. “We strongly encouraged everyone to wear masks and follow CDC guidelines and we had signs posted everywhere. There was no one who was belligerent and nearly everyone wore masks. We’d say about 85 percent of the attendees and nearly all the vendors.” Quintal also reported the population of the crowd over the two-day weekend were inline with attendance at pre-Covid shows, an encouraging response felt by the show organizers as well as the vendors at the show. Vendor Tom Gallenberg of Gallenberg Studios was quick to point out the excitable mood of the crowd, happy to buy a wide variety of works. “There was a lot of pent-up buying power and a large cross section of works being offered, so yes we were quite pleased with the crowd and they came from all over too,” said Gallenberg. “It was like the shows pre-Covid, only with masks.”

“It really felt like a throwback to shows three or four years ago. It felt normal for a change.” – Paul Freeman, Archive Editions 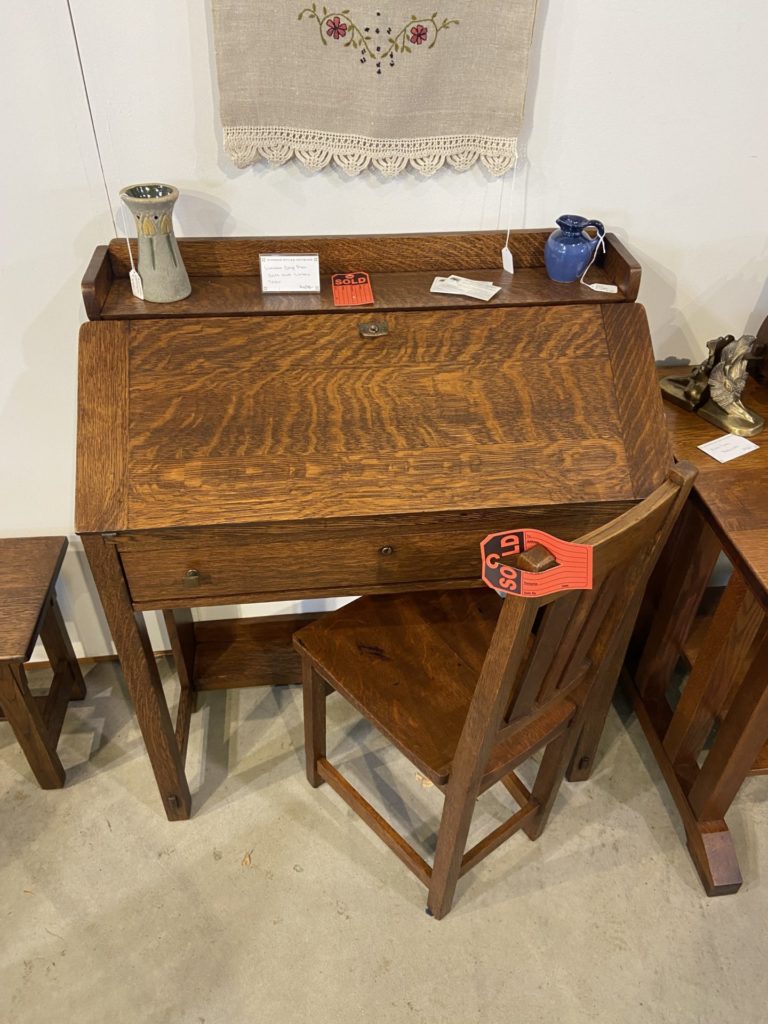 Limbert desk and chair sold at this past weekend’s Twin Cities Show by Gene and Jody Zwiefel of Kindred Styles Antiques. Photo courtesy of Jody Zwiefel. 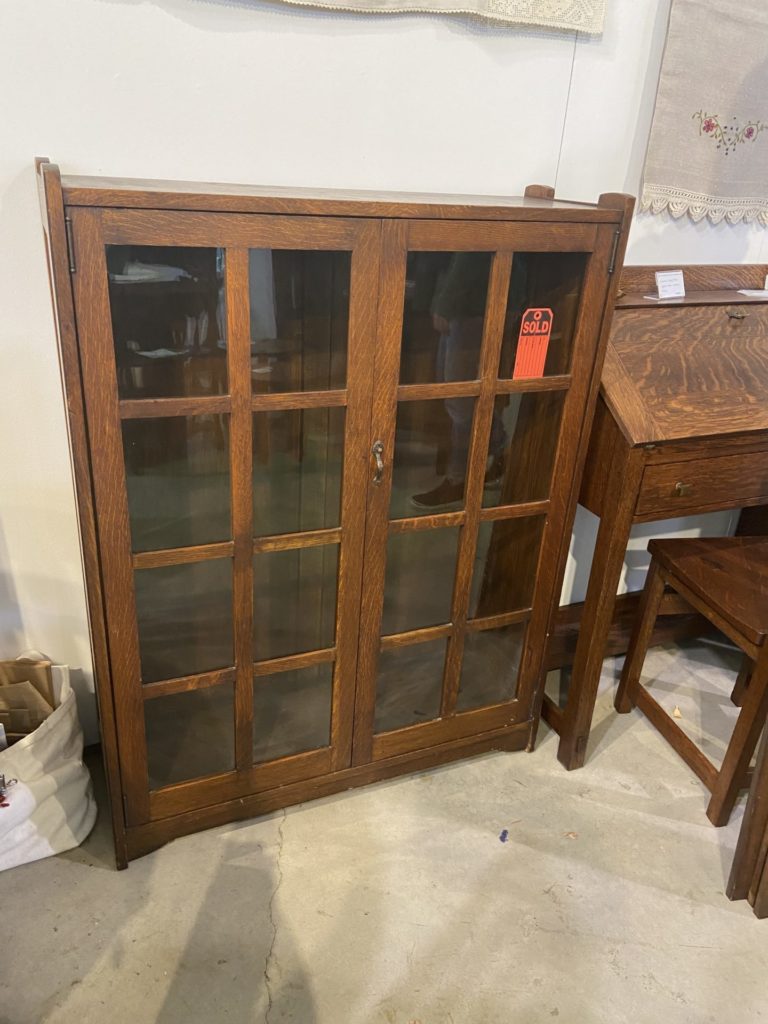 A Stickley Brothers bookcase sold at this past weekend’s Twin Cities Show by Gene and Jody Zwiefel of Kindred Styles Antiques. . Photo courtesy of Jody Zwiefel. 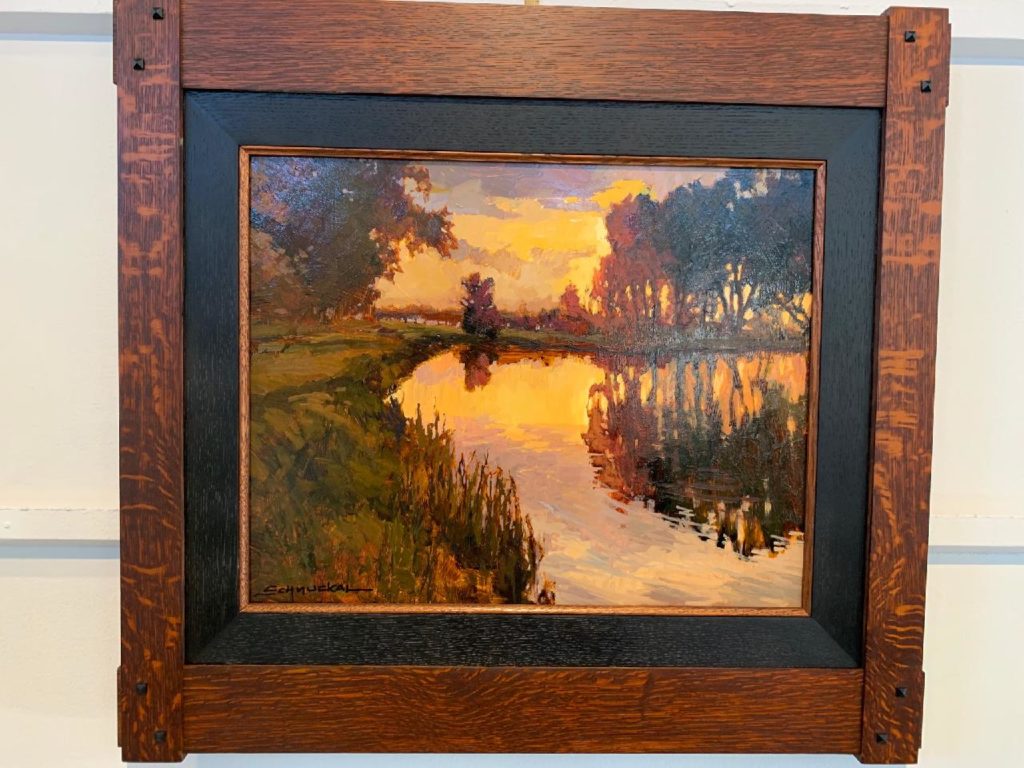 A Jan Schmuckal painting with a Dard Hunter frame sold at this past weekend’s Twin Cities Show. Photo courtesy of Dard Hunter. 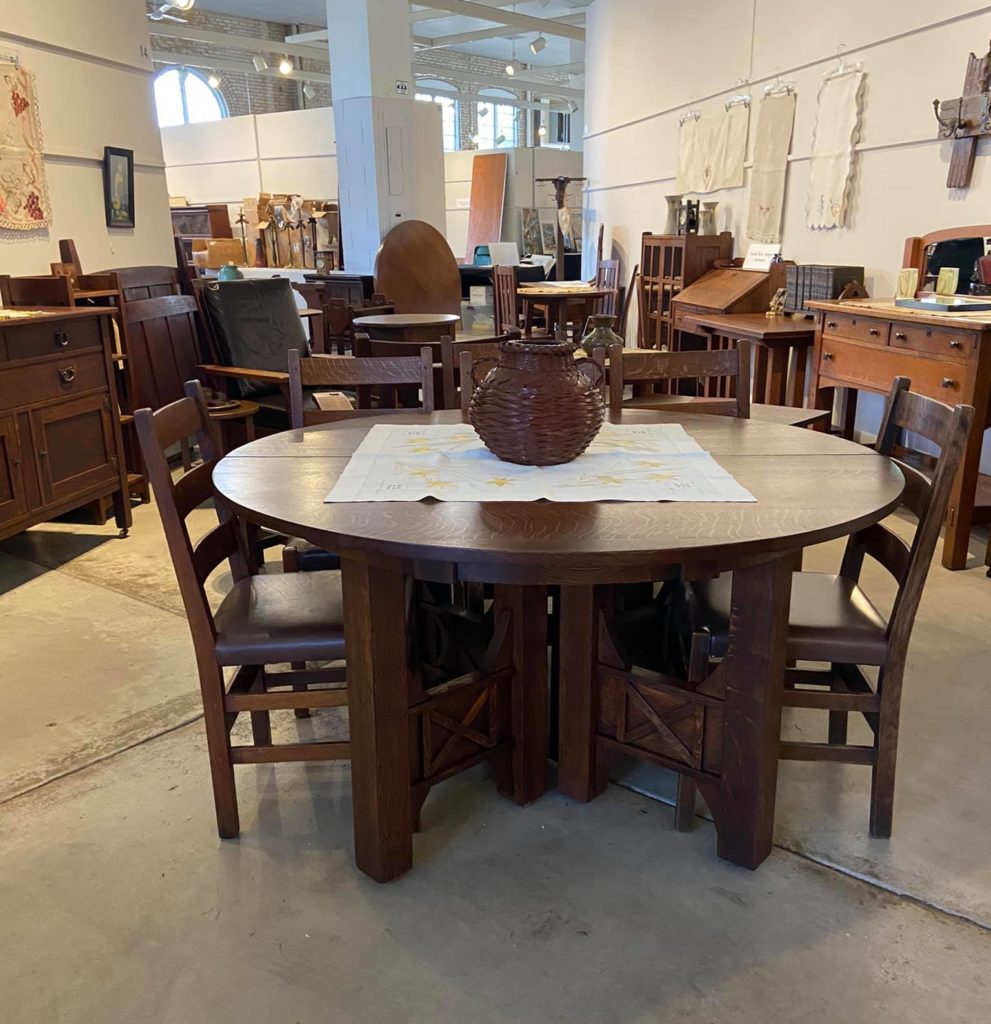 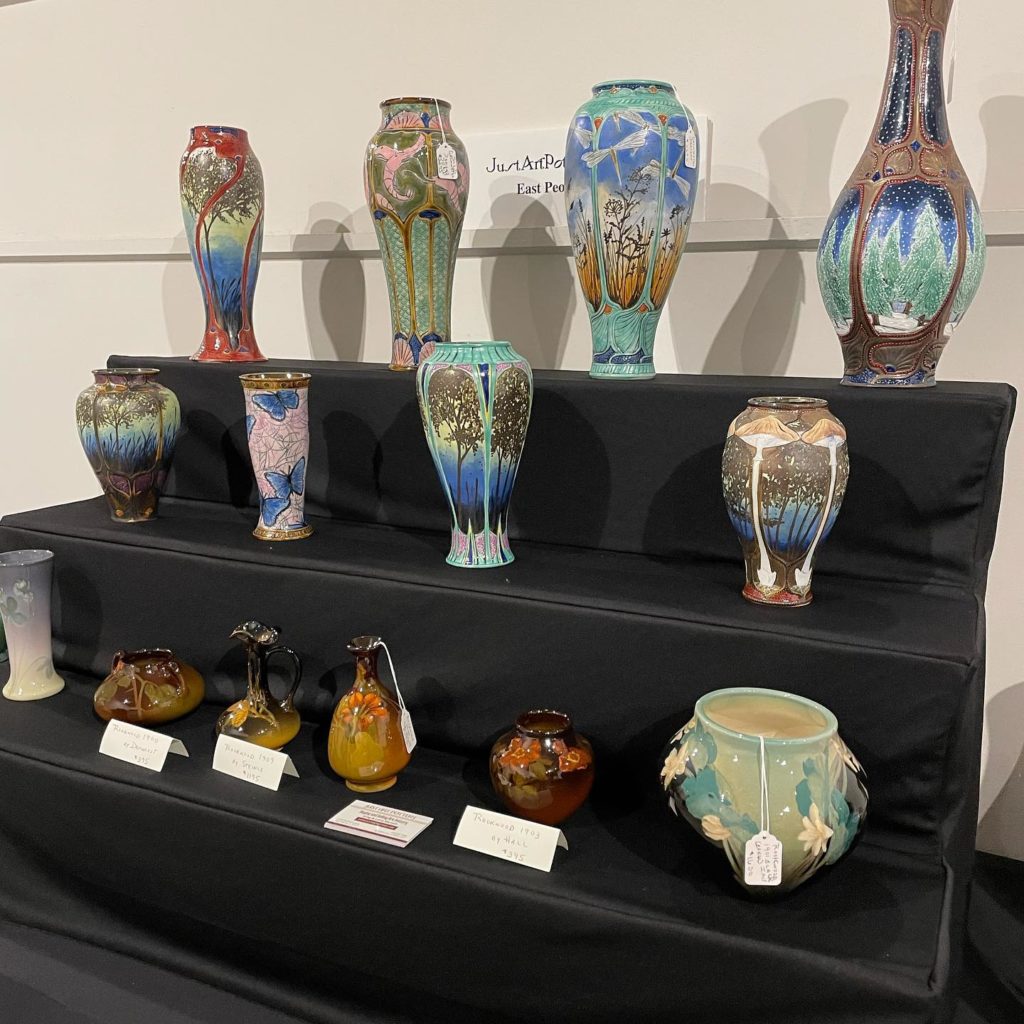 The vendors from both the Antiques and Contemporary genres of Arts and Crafts era works reported good sales from the crowds at the Twin Cities show. Gene and Jody Zwiefel of Kindred Styles Antiques (you can find their website HERE) were busy in their booth, their day full of interactions from interested customers ready to buy a variety of works. “Our focus was in furniture, but we also sold a few pieces of pottery, a few textile runners,” said Jody. “People seemed to be pretty excited to return to the show. In fact, I think there’s a resurrection of buying Arts and Crafts again.”

Paul Freeman of Archive Editions (whose textiles can also be bought online HERE), who will be stepping down from his business of selling antique textiles, was able to reconnect with so many of his clients who could enjoy the sensory experience of his textiles. “It really felt like a throwback to three or four years ago. It felt normal for a change,” Freeman confessed the Monday after the show. “Business wise, it meant getting back to normal. It was the opportunity to sell so many textiles in-person that I couldn’t sell online.” Freeman sold plenty of pillows, runners, rounds to his customers, both dedicated and new, making the experience successful in sales and yet bittersweet, knowing this show was most likely one of his last. “I’ve sold to a lot of the same people for years. They are sad to see me go. Regardless, the show was really nice and the crowd is so loyal to us.”

While the organizers’ decided to focus on getting the show ready and to not feature additional speakers or demonstrations due to the unsure nature of Covid restrictions, it did not stop the vendors and the crowds from making social connections with each other. The social aspect is an important quality to every show and this year was no exception. Tom Gallenberg of Gallenberg Studios, whose custom woodworking projects can be seen HERE, mentioned the importance of maintaining relations with clients at the show: “Folks stopped by with a lot of interest in hiring me for a custom project for their house. Meanwhile, I got to make a connection with an architect in the booth next door. The networking and the connection with your clients in-person is so important in a show like this.”

Dard Hunter of Dard Hunter Studios (shop the Dard Hunter Catalog HERE) said for him, the show exceeded expectations. “We had no idea what to expect,” said Dard. “A lot of people showed up. In all, I’d say it’s one of the nicer shows we’ve done. People were really excited to be there; it was really the best we could have hoped for.” In an email with Mr. Hunter before the show, Dard described preparing for the show as “the grand experiment.” This show not only gave vendors their best case scenario, but to Hunter, also revealed an important concept about his older clients: “They were so much more deliberate about their purchases. They even consulted with their children about what they liked since they would be the ones to inherit these works.” In terms of what sold and who bought, Dard said he noticed plenty of buying power from younger clients.”Most of our clients were younger people, starting out decorating their house. About 75% of our customers were return customers though.” 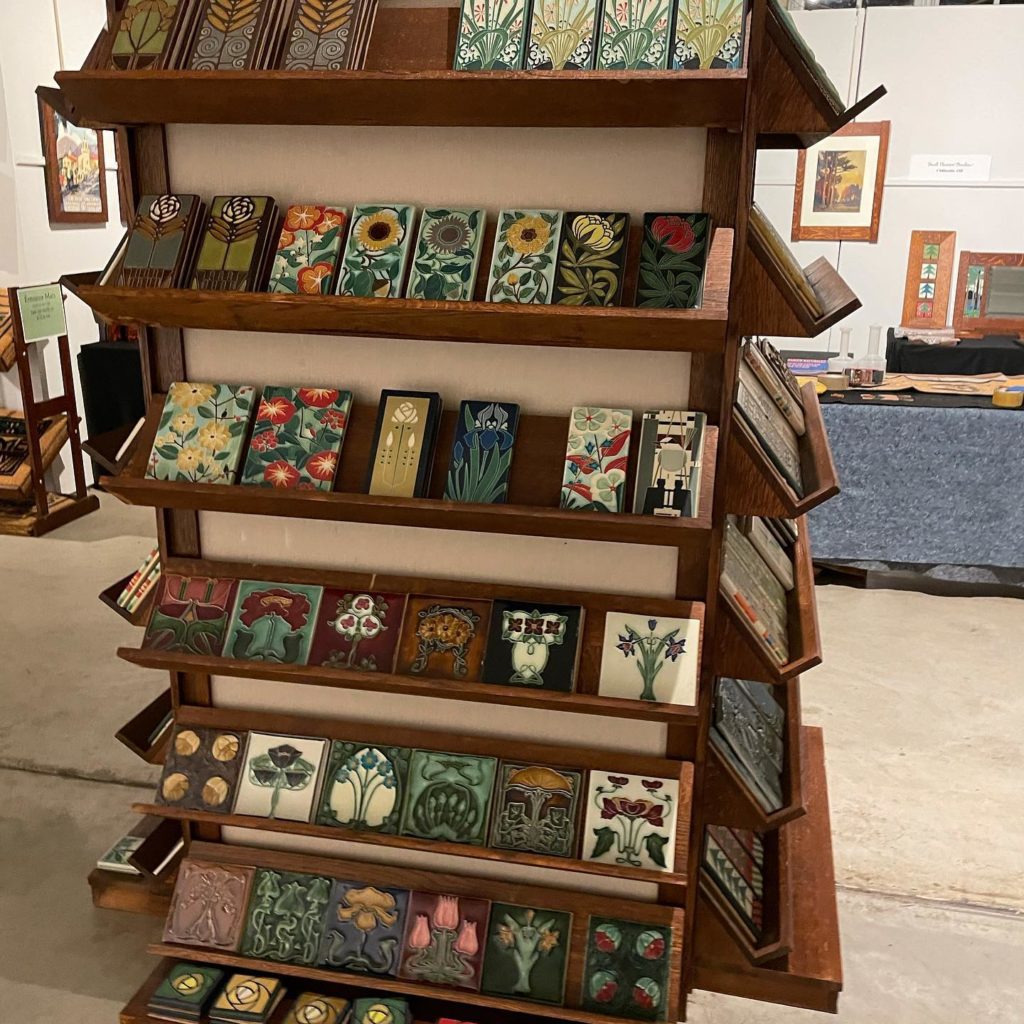 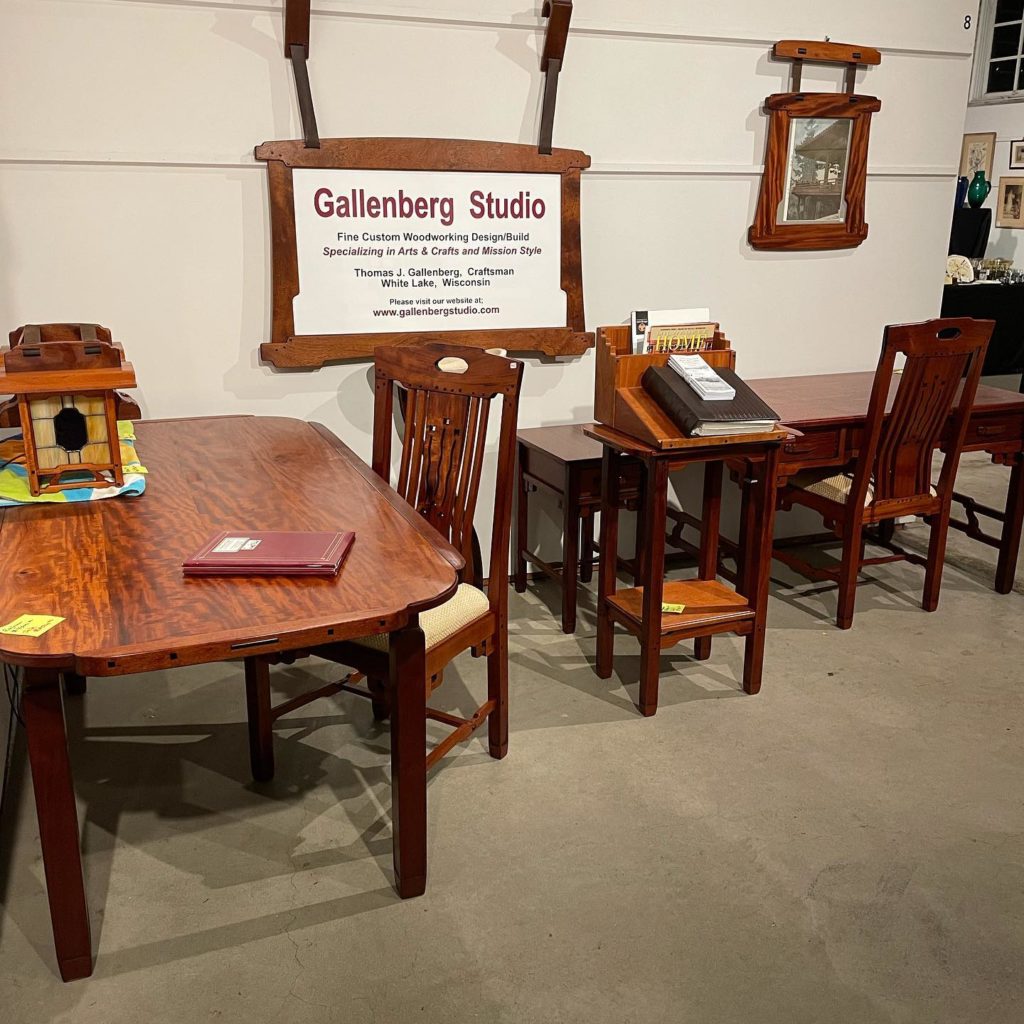 Highlights of the show? According to Quintal, he was just happy the show ran smoothly and the success was attributed to that good weather, a good community of people, and a good venue. Paul Freeman, whose unique textiles have in the past and most recently attracted the attention of creative teams from Hollywood for an upcoming feature film, spoke of a particularly exciting moment with a customer from the past finding a work in common. “The excitement of finding something new led to this moment where I showed her this image I had on my iPad of an impressive pattern I had and she excitedly said that she had the exact same design as a poster in her house. I was blown away by that!”

So can we expect changes to future Twin Cities Shows as a result of this new normal? Quintal says “If it ain’t broke, don’t fix it.”

Speaking of show highlights, ArtsandCraftsCollector.com will feature the updated schedule for the 2022 National Arts and Crafts Conference next week. Conference attendees and show goes will be able to see the 2022 seminar speakers, the topics of the popular annual Pre-Conference Workshops, the book club discussion topics, and the return of the Saturday Evening movie. 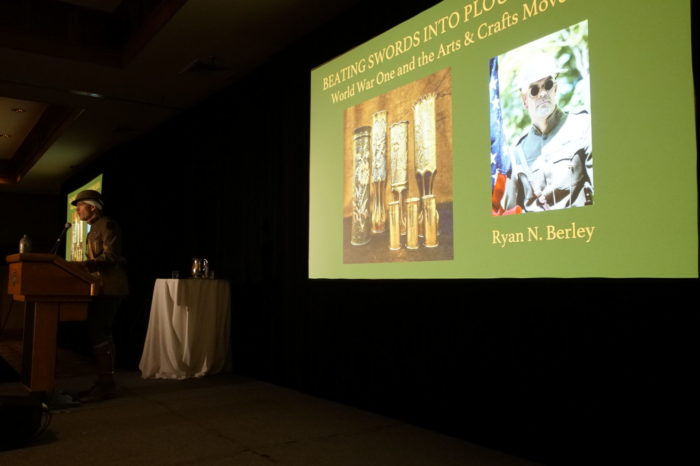