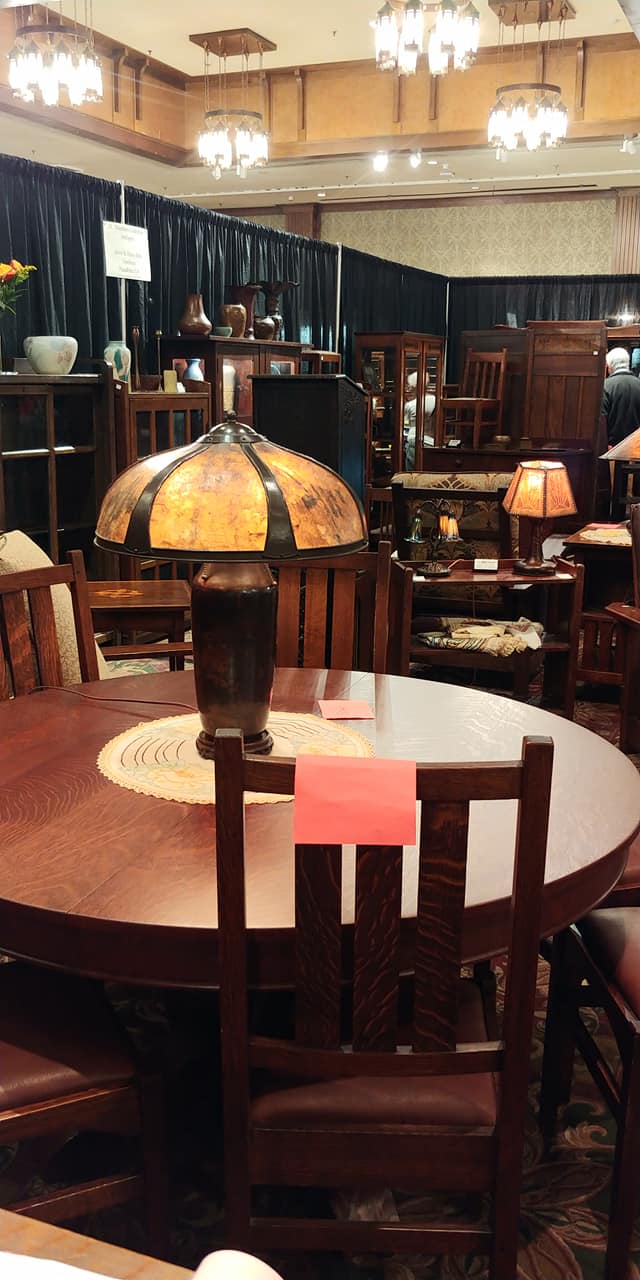 03/05/20: This article has been updated to include the attendance map visual at the end.

The Arts and Crafts Movement idealogy and its style of design marked by practicality, simplicity, and natural elements was celebrated with performances, seminars and rousing discussion groups collectors last month at the Omni Grove Park Inn in Asheville, North Carolina with the 33rd National Arts and Crafts Conference and Shows.

The yearly retreat for Arts and Crafts Collectors from all over the country and even to some of our Canadian neighbors featured Pre-Conference workshops that were sold out weeks before the conference began, an impressive lineup of seminar speakers, and the return of the popular Arts and Crafts Shows where vintage and contemporary works inspired by the Arts and Crafts Movement were sold – and to a record-breaking audience this year. As mentioned before, all four of the Pre-Conference Workshops were sold out by early February, featuring four Roycroft Renaissance Artisan instructors teaching the basics and intermediate skills of coppersmithing, printmaking, embroidery and metalsmithing. The workshops started on a day marked by rare winter weather and a busy day for the show exhibitors who moved their items into the 8th and 10th floors of the Vanderbilt wing, the annual location of the shows. However rare the snow was during the show preparations, 1.25 inches of snow was not enough to keep collectors, exhibitors, and Arts and Crafts fans away from enjoying the warmth of the Great Hall, enjoying the Grove Park Inn’s world famous Spa, and enjoying that beloved terrace view. 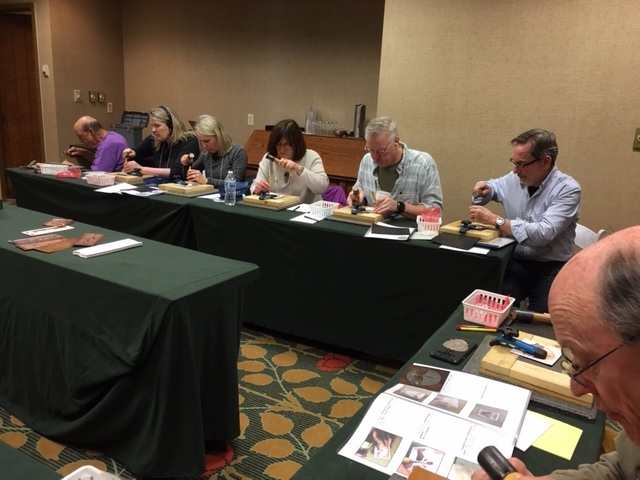 Participants work on their handmade tile projects during Frank Glapa’s Pre-Conference Coppersmithing Workshop this past February. Photo courtesy of Frank and Anastasia Glapa.

The sun is out in this panoramic view of the popular Terrace view overlooking the Grove Park Inn’s golf course, the city of Asheville, and the Blue Ridge Mountains. Photographer: Kate Nixon.

On Friday, the pre-show fun started with rousing small group discussions and tours of the Grove Park Inn and the nearby Biltmore Industries. Meanwhile, the line started to build early, lining up by the Vanderbilt shops and winding past by the Blue Ridge dining room. In fact, the exhibitor shows started with its largest opening audience ever with general public and conference attendees included. Additional highlights on Friday include the opening of the popular silent auction in the Arts and Crafts Shows, a book club discussion on Lesley Poling-Kempes’ “Ladies of the Canyons,” and a witty and enjoyable portrayal of Frank Lloyd Wright by American Historical Theatre actor Bob Gleason.

A professional actor with several historical performances under his belt, Bob Gleason’s portrayal of Frank Lloyd Wright helped to open the National Arts and Crafts Conference along with opening comments from Conference Director Bruce Johnson and replacing historical actor Annette Baldwin’s portrayal of Jane Addams as previously published in conference literature. While the change in the lineup happened quickly, Mr. Gleason was happy to fill in and got to experience both the Grove Park Inn and a crowd of nearly 1,000 Arts and Crafts enthusiasts. After all was said and done, Mr. Gleason will plan to return to the Grove Park Inn for a future trip. As for Annette Baldwin and her portrayal of social icon Jane Addams, she will make her appearance in 2021’s opening performance as Jane Addams in period clothing. 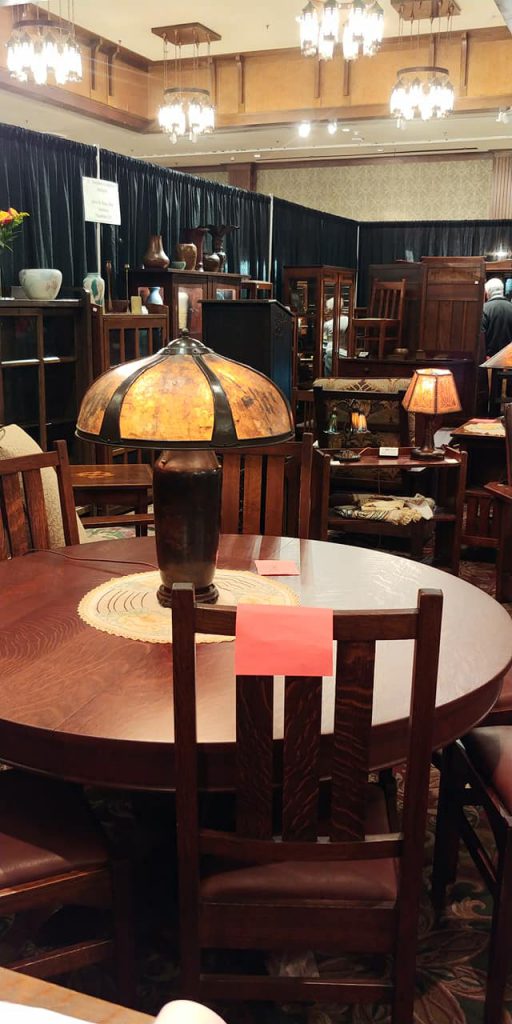 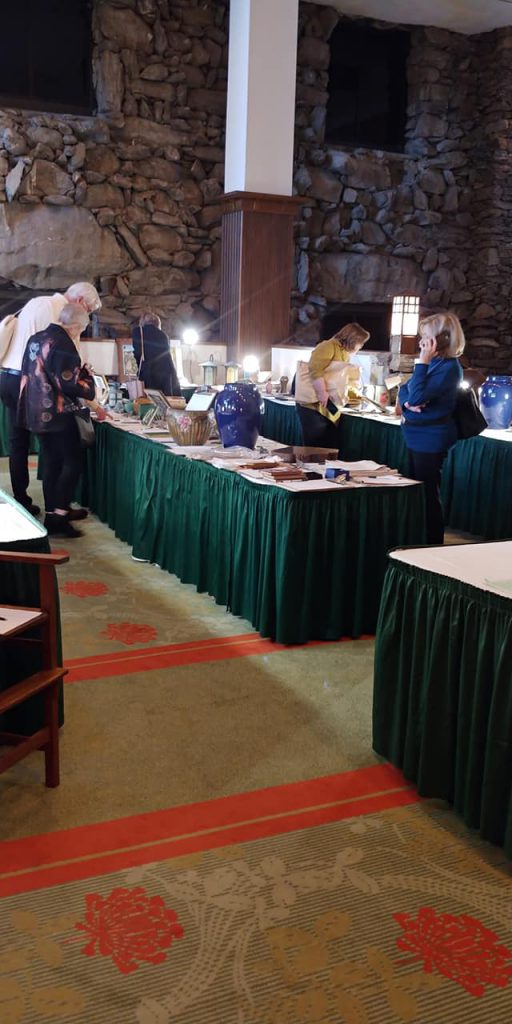 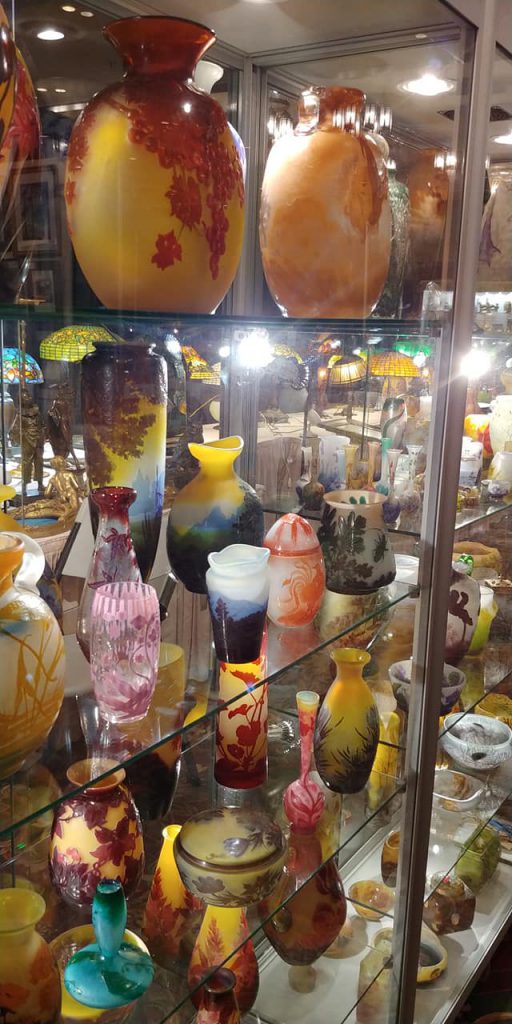 From top to bottom: Arts and Crafts furniture offered in the antiques show, interested bidders look at the items offered in the non-profit fundraiser silent auction, and a display of glass vases. Photographer: Kate Nixon.

The fun continued on Saturday with two well-attended morning seminars: an exploration of the eccentric George Ohr in George Ohr: Sophisticate or Rube? by Thiel College’s Ellen Lippert and a revealing talk on the lesser known Hubbard, Bert Hubbard, given by historian Robert Rust. The always popular discussion groups continued with topics such as Native Plants and the Arts and Crafts Landscape, Problems – and Solutions – In Restoring Your Old House, and Gustav Stickley: Prophet or For Profit? Additionally, the Stickley Museum at Craftsman Farms had a special discussion group about the behind the scenes processes of their organization hosted with Vonda Givens, Executive Director. For those attendees and the general public who wanted to be education at their leisure, the conference provided educational display cases in the great hall about World War 1 trench art, the many glazes of Fulper pottery, and an exploration of Gustav Stickley’s early workshop. The Arts and Crafts shows opened for another day and reported another busy day with a great turnout, while other enthusiasts headed to our special fundraiser events: the annual Preservation Society Historic Home tours and the special Asheville Art Museum panel discussion. The former took attendees on a ride through the Norwood Neighborhood, a nearby neighborhood featuring homes in the Arts and Crafts style where those attended got to explore the design of the homes up close, while the newly opened Asheville Art Museum opened its doors for admission into its sleek new exhibits and a special panel discussion on how Asheville tourism was affected by the Arts and Crafts Movement. The evening ended with a packed house in the heritage ballroom with a premiere of the highly anticipated feature-length documentary Gustav Stickley: American Craftsman. 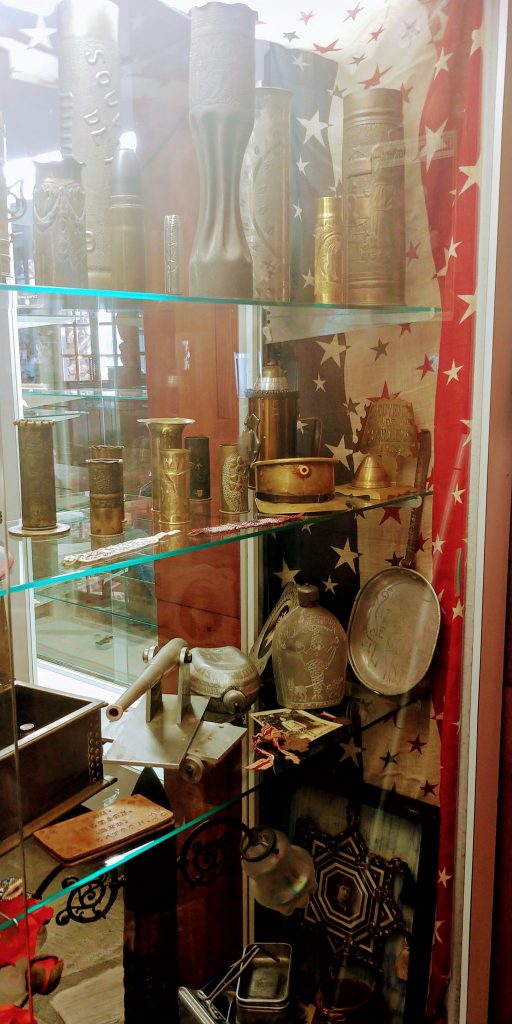 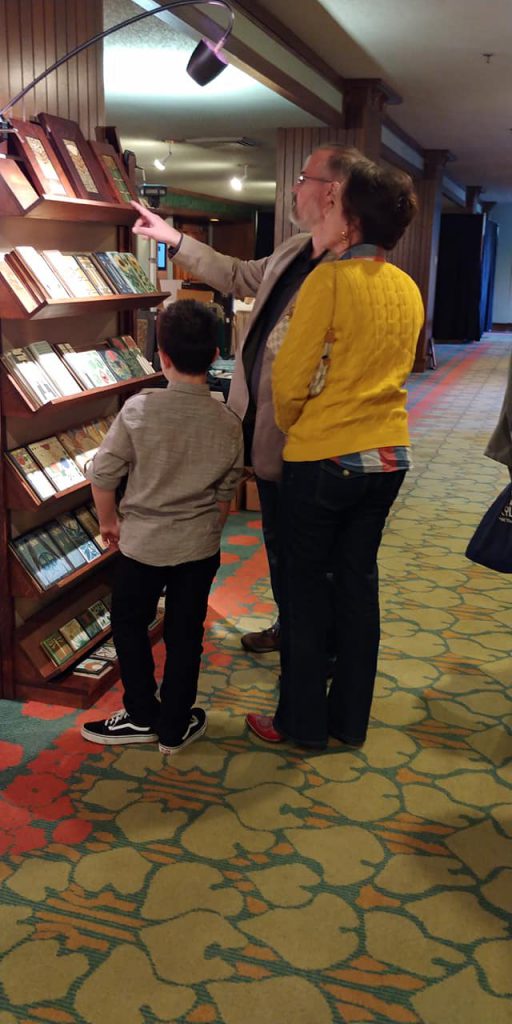 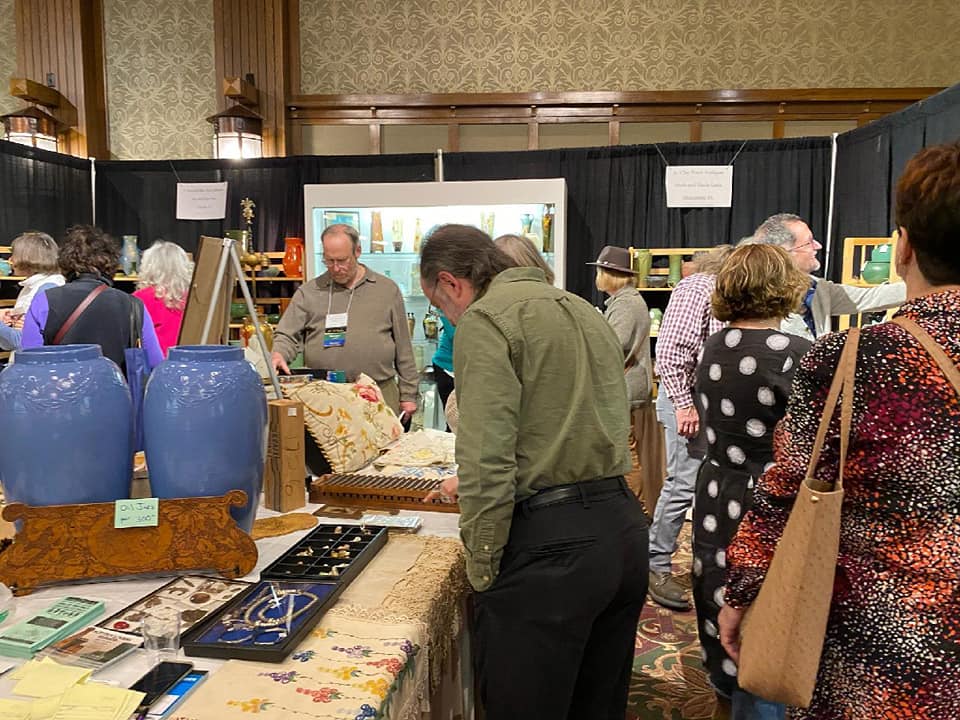 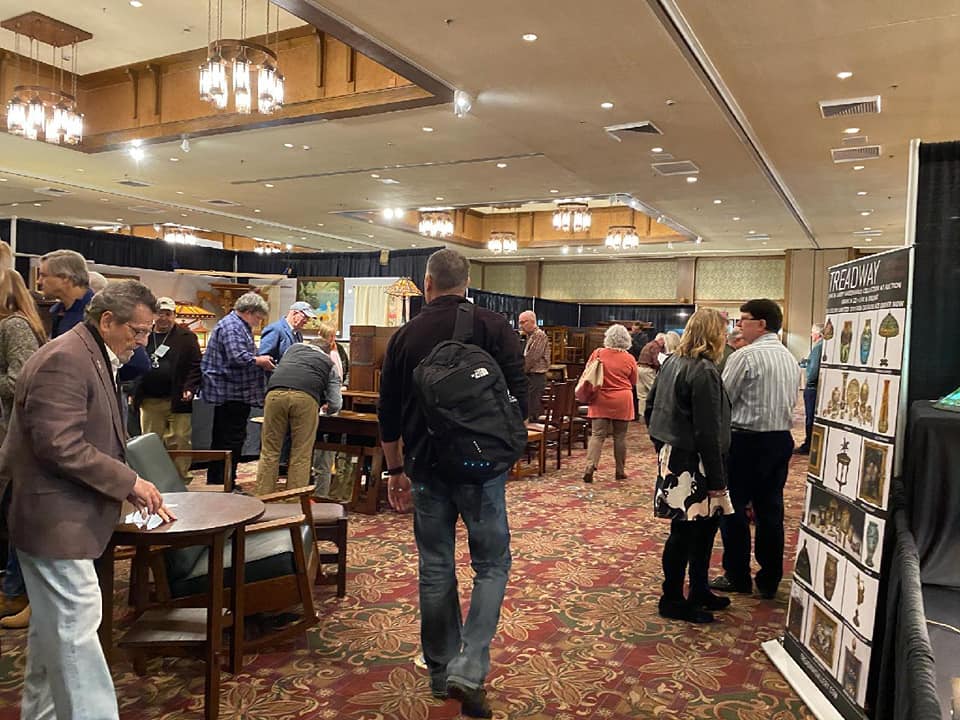 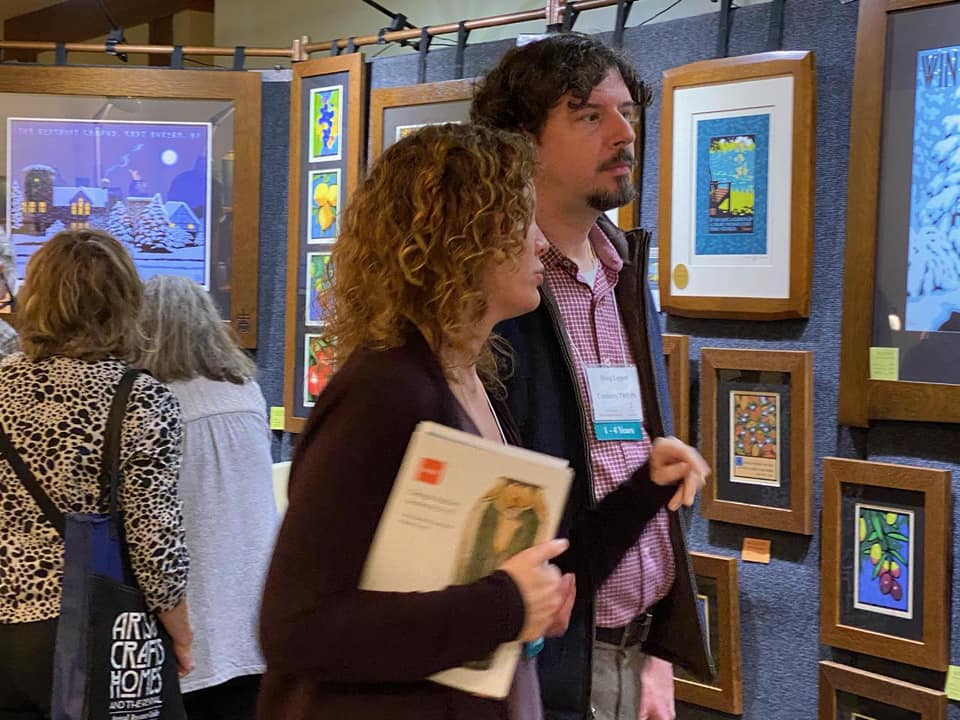 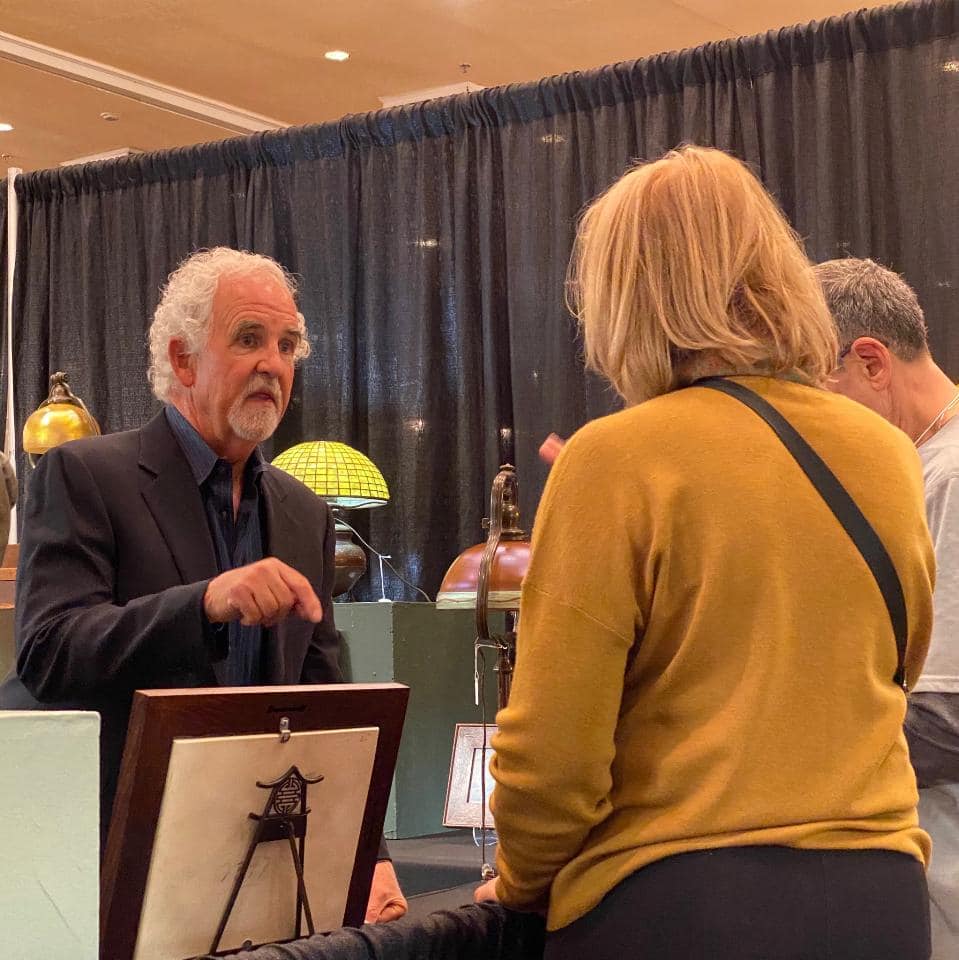 Top row: Ryan Berley’s display case “Beating Swords Into Ploughshares” supplementing his Sunday morning seminar of the same name, attendees of all ages enjoy the variety of tiles offered during the Arts and Crafts shows.

Sunday’s events closed out the weekend with another two fantastic seminars: Ryan Berley’s “Beating Swords into Ploughshares: World War 1 and the Arts and Crafts Movement” about trench arts and crafts during World War 1 as well as photographer Douglas Keister’s “The Bungalow Goes to Hollywood” a visual adventure delving into the evolution of the storybook style of house design in the golden hills of Hollywood, California. The silent auction, a fundraiser for the non-profit Arts and Crafts Research Fund, reported their highest total in years, passing the $10,000 mark and folks excitedly hurried to the Vanderbilt wing to pick up their winnings. The small group discussions came to a close with enjoyable topics like Arts & Crafts Era Music: What Were People Listening To, The Bungalow and Beyond, and Arts & Crafts Textiles: Beyond Pillows and Table Runners. While enthusiasts continued their historic house tours, purchased precious arts and crafts pieces from the shows, and enjoyed the lovely weather on the terrace, the conference came to another end — with the wheels for our 2021 conference plans already in motion. 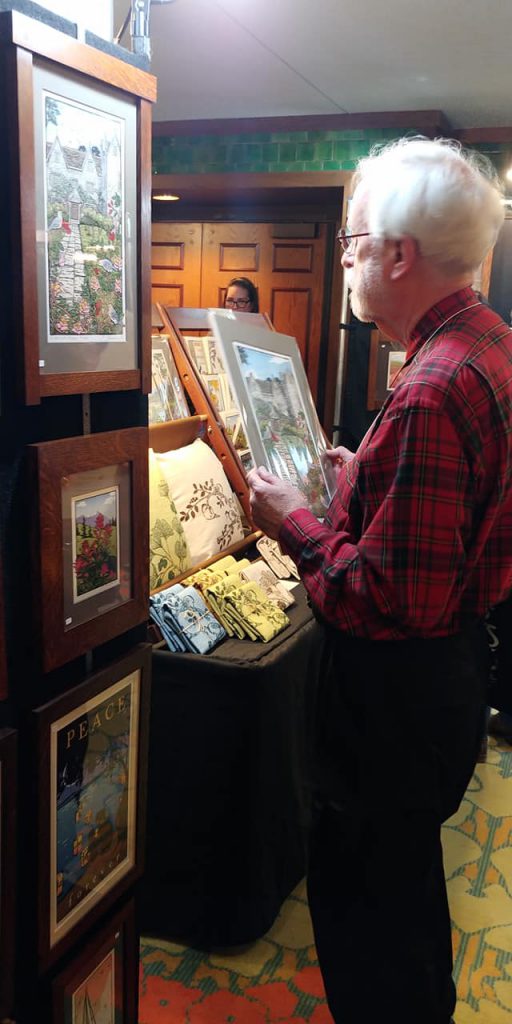 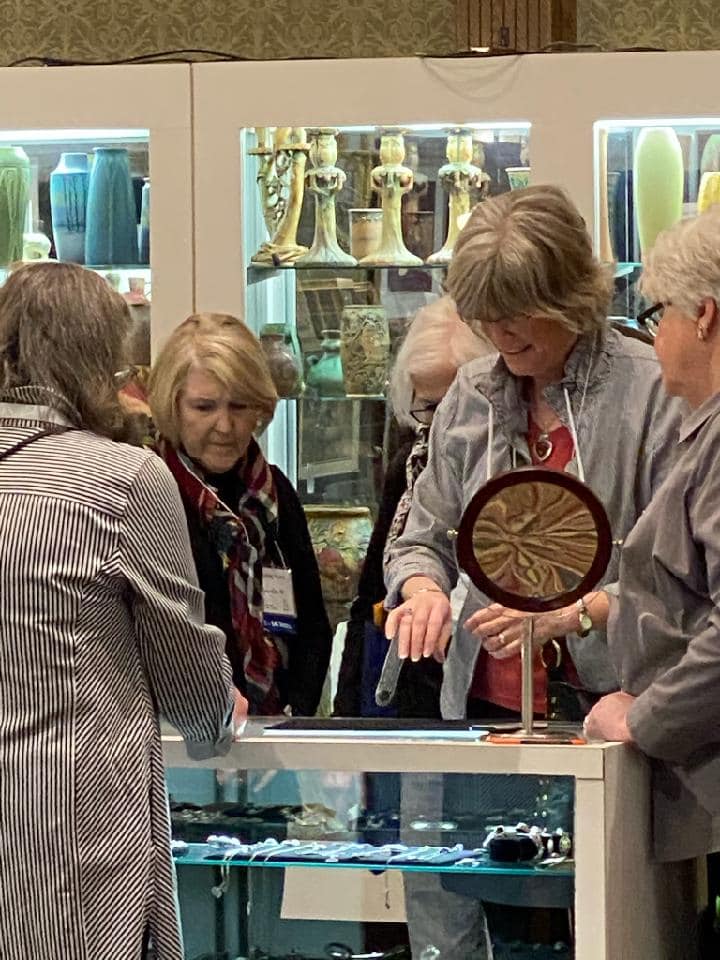 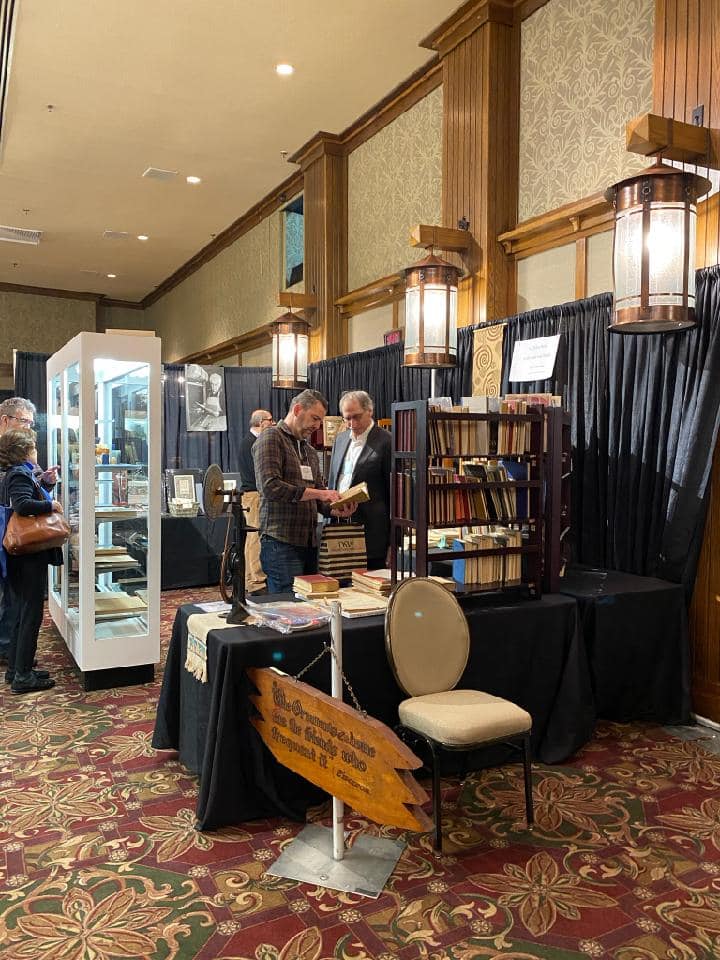 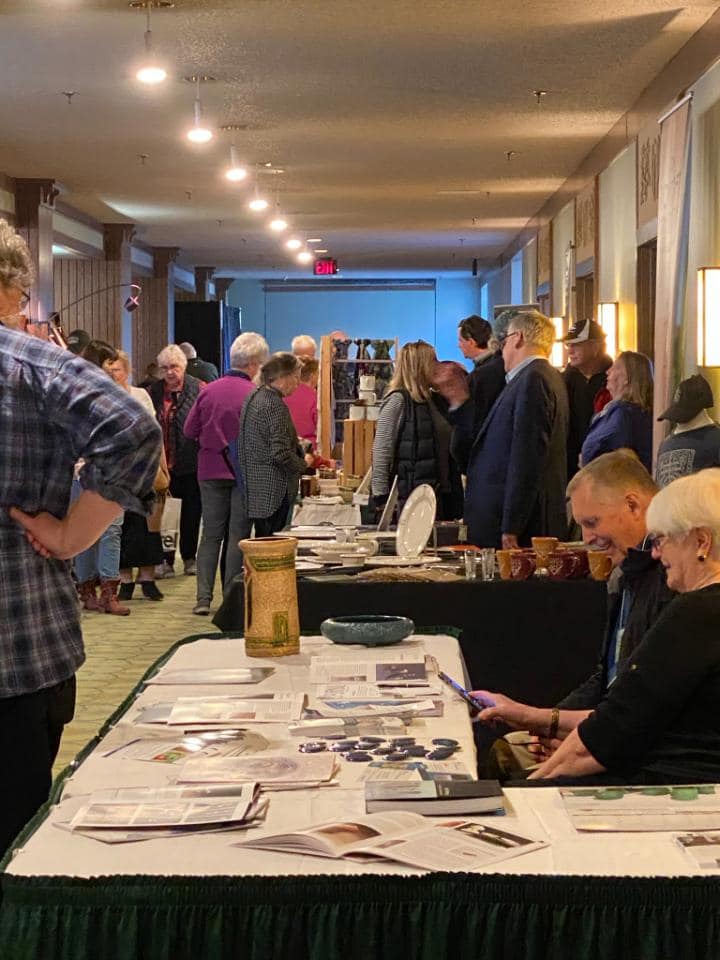 Every year, we are so proud to be able to welcome many newcomers to the conference and so humbled to be able to welcome our returning attendees, whether it’s a third time attending or thirty-third time attending. Attendees come from all corners of the country to the Grove Park Inn to celebrate the Arts and Crafts Movement. In case you missed it, a map was displayed on the information tables by the registration desk, encouraging attendees to make their mark on the map and show where they came from. Here is the finished visual after the conference: 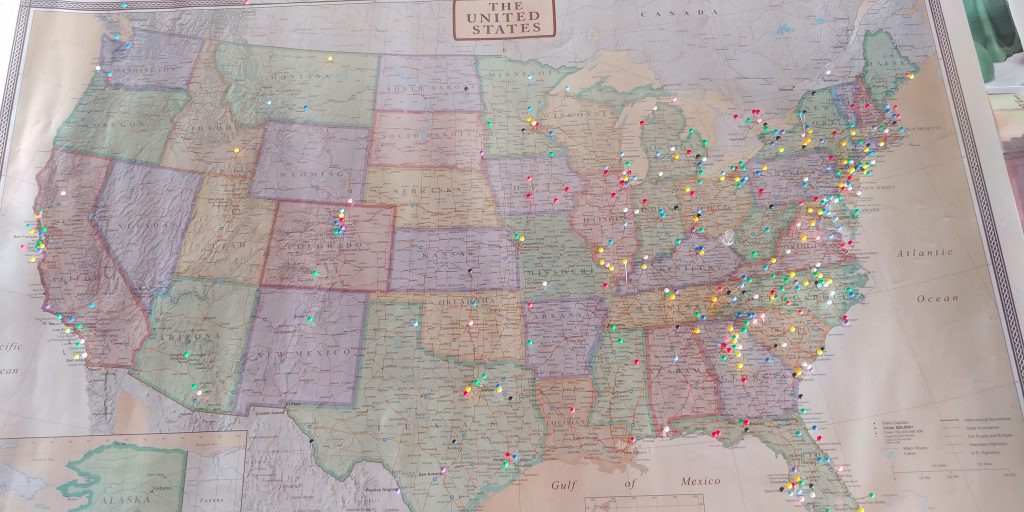 For all those who attended, we hope you enjoyed yourselves! Stay tuned for our 2021 plans and visit www.arts-craftsconference.com for updates.

The 34th National Arts and Crafts Conference and Shows will return to the Omni Grove Park Inn in Asheville, NC from February 19th through the 21st in 2021. 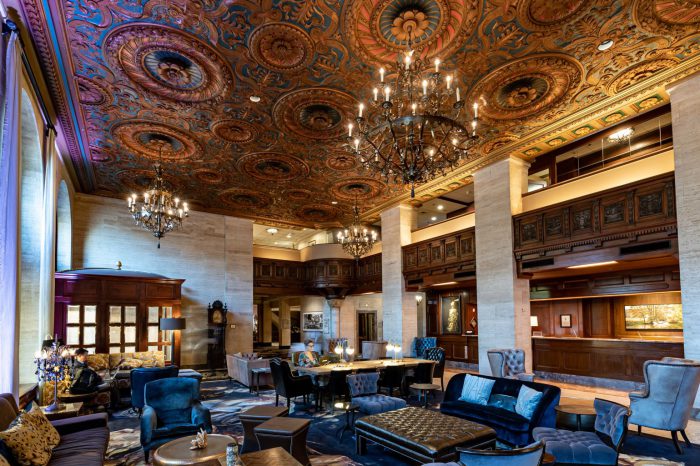 Discover a Decorative Art Paradise in Delaware with Farms Afield!