Knowing that the covid pandemic would prevent some Arts and Crafts collectors from attending the live 35th National Arts and Crafts Conference and Shows at the historic 1913 Grove Park Inn, we simultaneously began making plans to make available video recordings of the seven seminar presentations. We also are making available a walking tour of the 1913 Grove Park Inn and of the 1917 Biltmore Industries. In addition, virtual subscribers will be able to watch the first behind-the-scenes videos of the Contemporary Craftsfirms Show and the Antiques Show taken just minutes before the shows opened, and will receive a PDF and printed copy of the Conference Catalog.

The Virtual Conference Replay pass is now available at a cost of $110 per household. A more detailed description of each of the 10 events can be found at www.Arts-CraftsConference.com. The recordings will remain available for customers until March 31st.

Here, then, is a preview of what you will see: 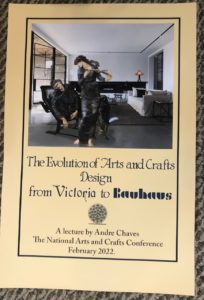 Images above. Left: an Andre Chaves-designed poster advertising the Evolution of Arts an Crafts Design given by Andre Chaves himself. Right: an example of Newcomb College pottery. One of the many artisans to design for Newcomb is Juanita Gonzalez, whose talents shone in the later Arts and Crafts years of Newcomb and beyond. Speaker Tom Folk tells us about Juanita’s life and collaborations.

Andre Chaves again delivered a stirring and insightful exploration of the Arts and Crafts style and how it evolved. Witty, humorous, and always educational, Andre’s seminar “The Evolution of Arts & Crafts Design” was both personal and historic, and had the audience buzzing about it all weekend.

Author Tom Folk took us on a journey with “The Tragic Life of Juanita Gonzalez,” the Newcomb College Pottery designer and artisan who came to the college in 1921. The pottery director called her the most talented women he had ever seen. Her influence on the style of Newcomb from that point on was so great that the college still awards the annual Juanita Gonzalez Prize in Ceramics. This is a presentation not to miss. 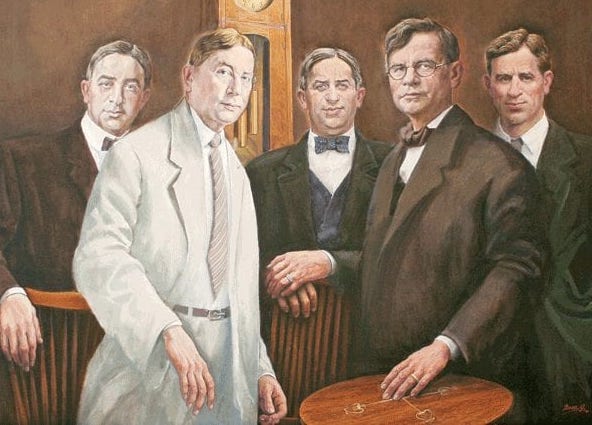 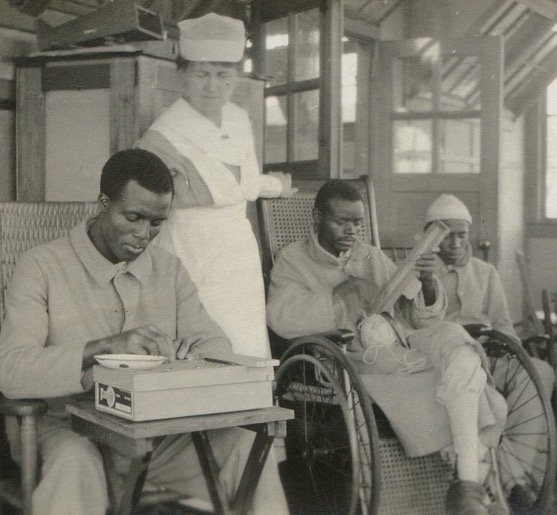 Images above. Left: an illustration of all five Stickley brothers with Stickley furniture. Speaker Jill Thomas-Clark tells us about the surprising life of brother Albert Stickley. Right: from the students and teachers of Tuskegee University to the writings and travels of Booker T. Washington, the connections of the Arts and Crafts Movement to the early 20th century African American community are explored by Elaine Pinson.

Another Arts and Crafts author, Jill Thomas-Clark reminded us that there was far more to the Stickley legacy than Gustav and Leopold. Their brother Albert, who moved to Grand Rapids, in many ways was more of a trendsetter, but until now has languished in the shadows of his brothers. After watching her presentation “Working In the Shadows: The Surprising Life of Albert Stickley” you will come away with even greater respect for Albert Stickley and his furniture. 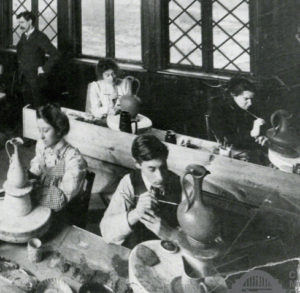 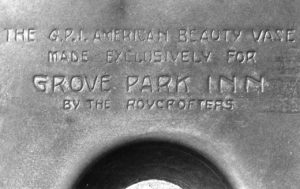 Images above. Left: artists working for the Rookwood firm and painting vases. Right: an inscription on the American Beauty Vase made by the Roycrofters. Historian Robert Rust reveals the life of designer Victor Toothaker and his accomplishments in providing the Grove Park Inn with lighting fixtures and furniture.

Just as Tom Folk drew our attention to the later years of Newcomb Pottery, author Riley Humler proved to us that the later works of the Rookwood Pottery deserve more respect and attention than they had previously been awarded. After watching “When Art and Craft Meet Technology: Rookwood In the 1920s” you will have a better understanding of what you are seeing when you spot a later piece of Rookwood at a shop or show.

Roycroft historian Robert Rust, who has been involved with the Arts and Crafts revival since the early 1980s, delved into one of the more mysterious of the Roycroft craftsmen in his seminar “The Elusive Victor Toothaker.” In 1913 Victor Toothaker designed all of the lighting fixtures and major pieces of furniture for the Grove Park Inn, some of which have never been surpassed. Yet as quickly as Victor appeared on the Arts and Crafts scene, he disappeared, prompting Robert Rust to explore the dark side of the talented designer’s troubling life. 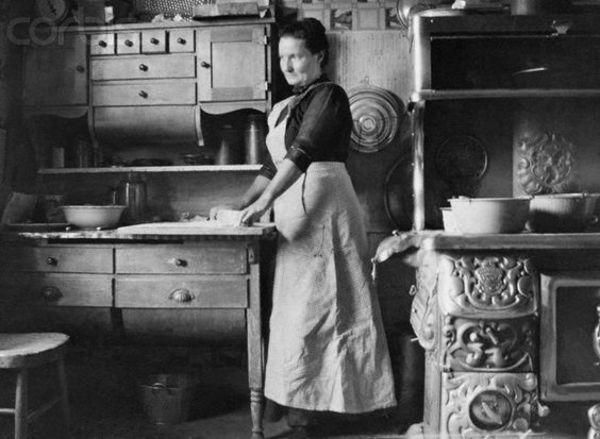 In addition to these seminars, you can also watch as author Bruce Johnson leads you on a tour of the historic Grove Park Inn, explaining just why the famed hotel is still considered the finest Arts and Crafts resort hotel in the entire world. Bruce also wrote and recorded a history of Biltmore Industries, a cottage industry which lasted from 1905 until 1972 and whose legacy lives on in the restored buildings next door to the Grove Park Inn. 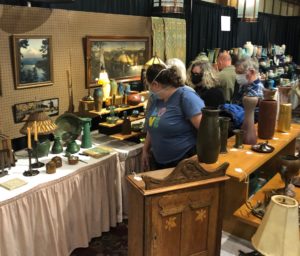 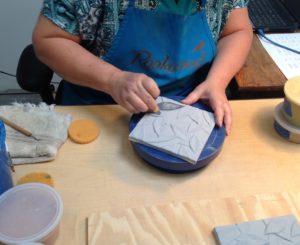 Finally, prior to the opening of the shows, we recorded a stroll through the booths of the Antiques dealers and Contemporary Craftsfirms even as they were putting the finishing touches on their booths. Conference director Bruce Johnson recorded the narrative over the video, giving you an even greater insight into all of the wonderful pieces which had been assembled for the show.

Again, the Virtual Conference Replay pass is now available at a cost of $110 per household. A more detailed description of each of the 10 events can be found at www.Arts-CraftsConference.com. The recordings will remain available for customers until March 31st.

In addition, everyone also has the option of purchasing both the 2022 and the 2023 Arts and Crafts Conference posters for the combined price of $20, which includes flat envelope shipping, for a total of $130. 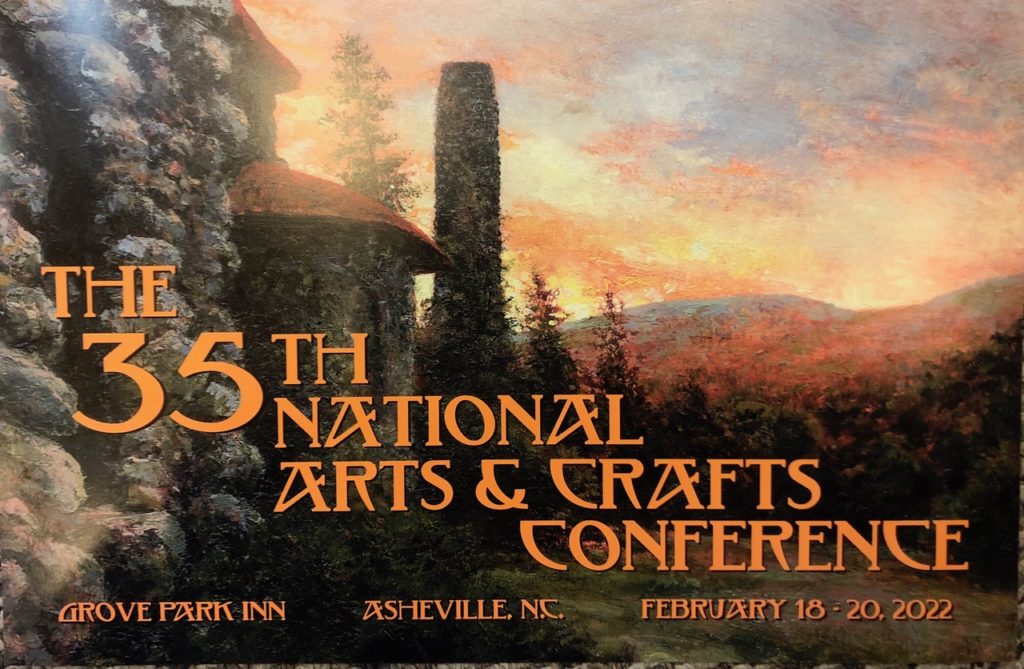 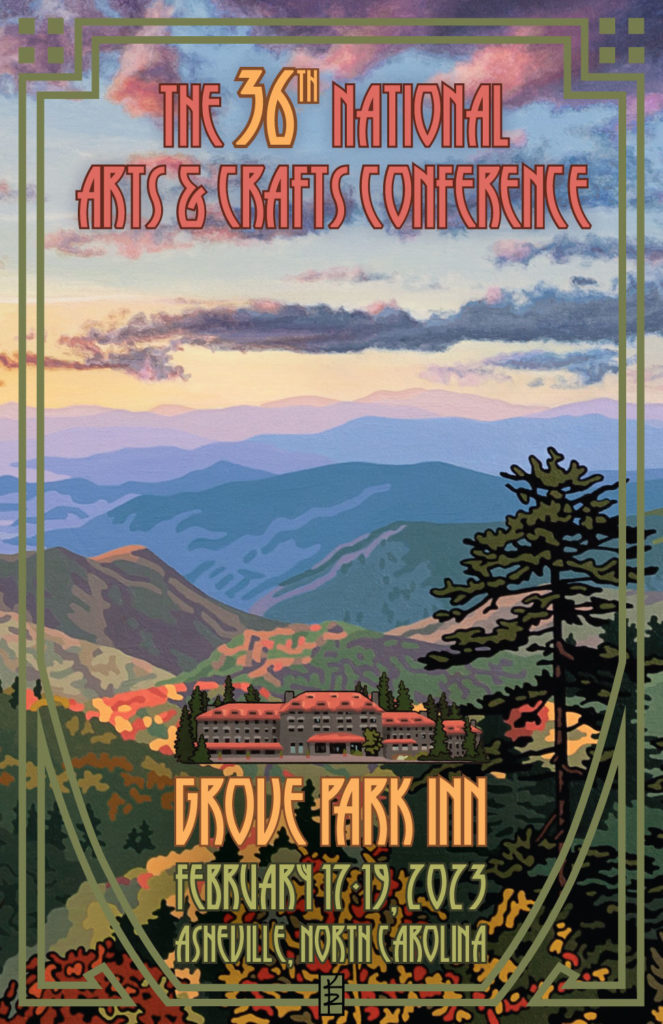 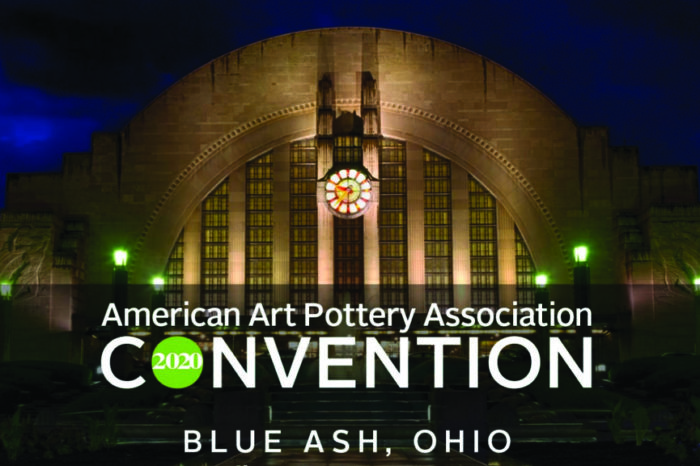 AAPA Convention Will Return to Ohio