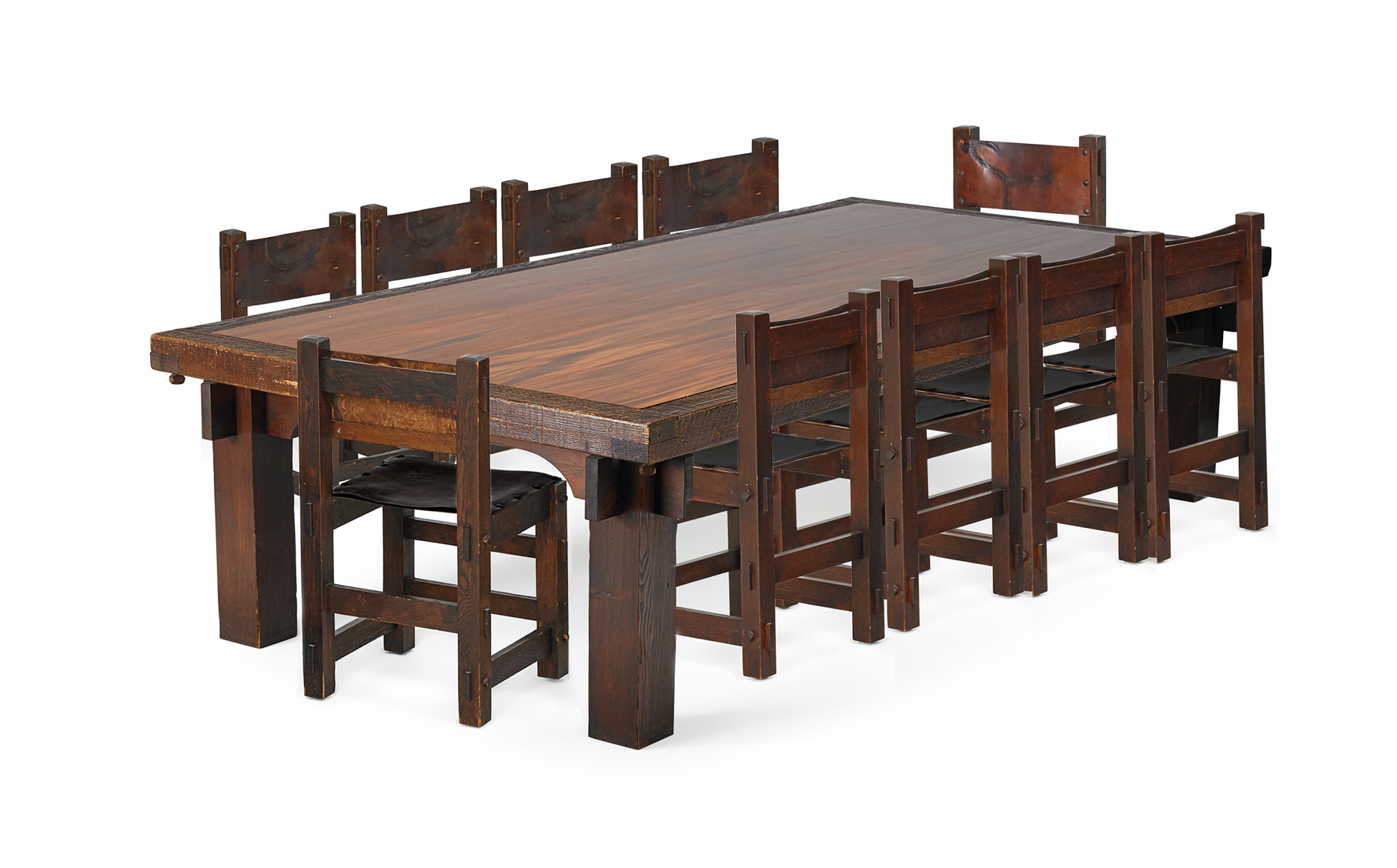 The Early 20th Century Design sale to be held May 19th at the Rago auction center in Lambertville, NJ will again feature a broad array of Rookwood, Fulper and Grueby art pottery, along with a representative selection of Gustav Stickley furniture. But the highlight of the auction will undoubtedly be a rare and unique California dining room table and ten chairs designed in 1905 by architect Frederick L. Roehrig. 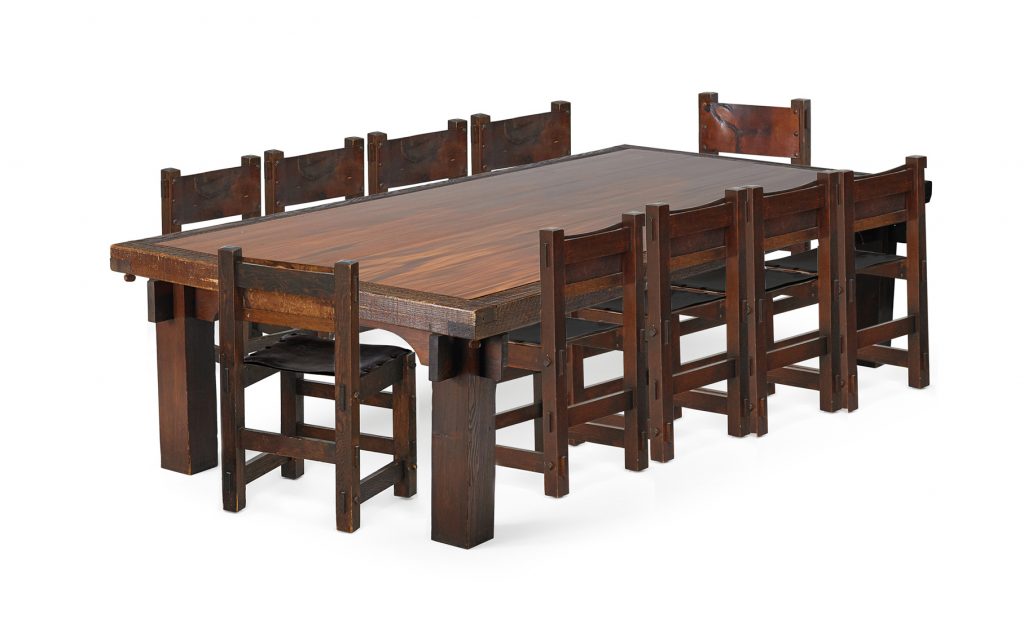 Arthur Jerome Eddy (1859-1920) was a Chicago-based attorney who decided in 1905 to make Pasadena, California, his permanent home. That year he commissioned architect Frederick L. Roehrig (1857-1948) to design a home incorporating elements of southern California living, including the traditional U-shaped adobe. As Robert Winter later wrote:

“Roehrig gave Eddy a house in brick and concrete which carried out the Mexican ideal in plan and exterior impression, but was pure California Yankee Craftsman inside. Added to this was a living room fireplace of boulders probably from the Arroyo and a dining room set of redwood and mahogany whose chairs were upholstered with leather, some of them marked with the brands of the cattle farmers from which it had been purchased.”

So impressive was Frederick Roehrig’s design for Arthur Eddy that Gustav Stickley featured his work in The Craftsman magazine in November of 1906.

Author Robert Winter, when writing about the Eddy House in 1974, did not mince any words: “All of this was not recognized by the citizens of Pasadena who allowed the building to be demolished in 1972 in order to make way for one of the ugliest apartment houses ever conceived by man.”

Fortunately, the dining room set, consisting of a ten-foot long table and ten matching chairs, did survive. As the condition report reveals, leather is not as durable as wood, as two chairs have either replaced seats or backs, and there is “some dryness to all hide seats and backs. Tear to one leather back (2 1/2″), some backs are close to tearing. Table: Refinished top only, some scuffs, scratches, dents, and finish loss evenly throughout. Overall wear to table and chairs commensurate with age.” 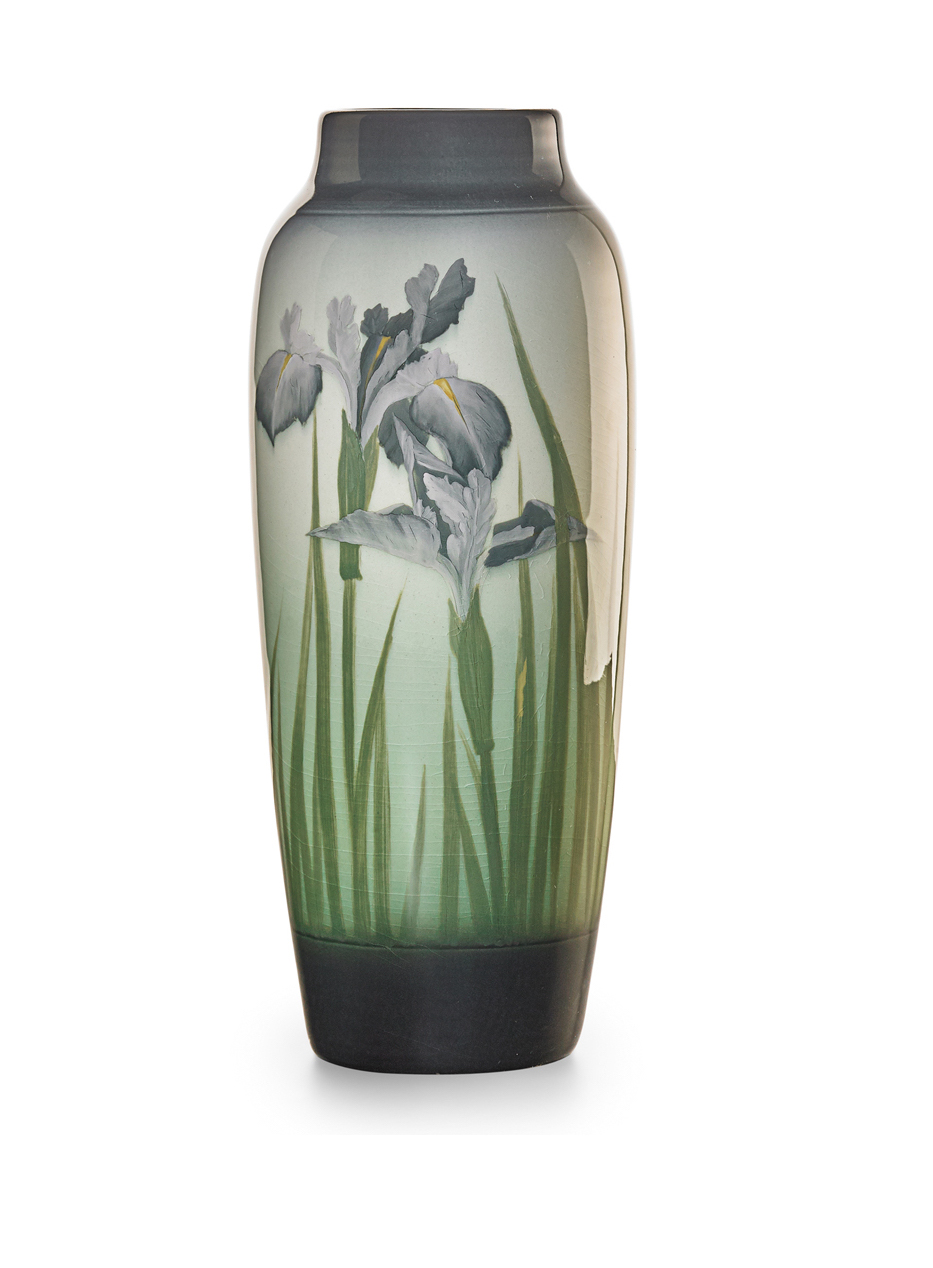 The sale will open with 42 impressive examples of Rookwood vases and tiles designed by a list of artists which reads like a Who’s Who in American art pottery: Carl Schmidt, Sallie Coyne (pictured), Kataro Shirayamadani, Sara Sax, Matt Daly, and Edward Hurley. They will be followed by a number of vases by Fulper and Grueby, as well as other major art potteries. 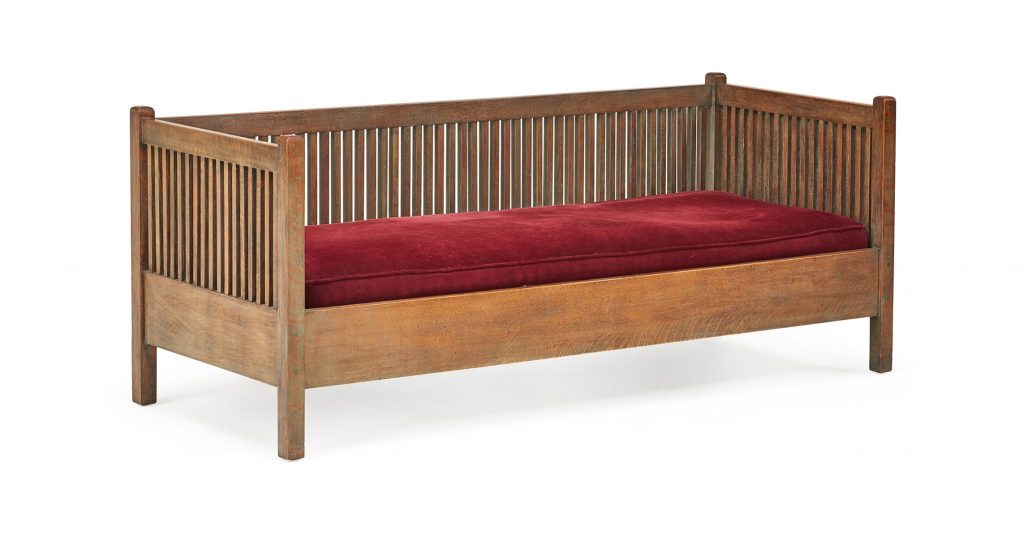 Arts and Crafts furniture historians can recall the day when nine examples of Gustav Stickley spindle furniture in a single sale would have sparked headlines, but in recent years prices have settled to more moderate levels. This sale will include a spindle settle (pictured, est. $4000-6,000), a cube chair, a Morris chair, a loveseat, a library table and four high back dining chairs. Nearly all, however, arrived with a “pigmented overcoat over original finish.” To what degree that will influence bidding remains to be seen.

For more information on the May 19th sale and to view the entire catalog, please go to: 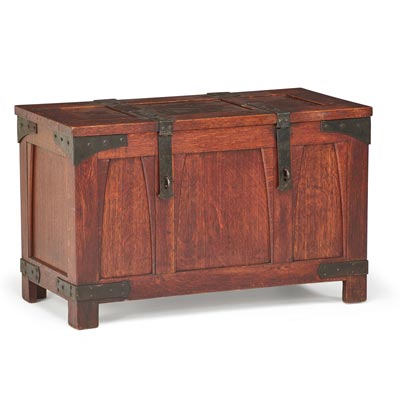 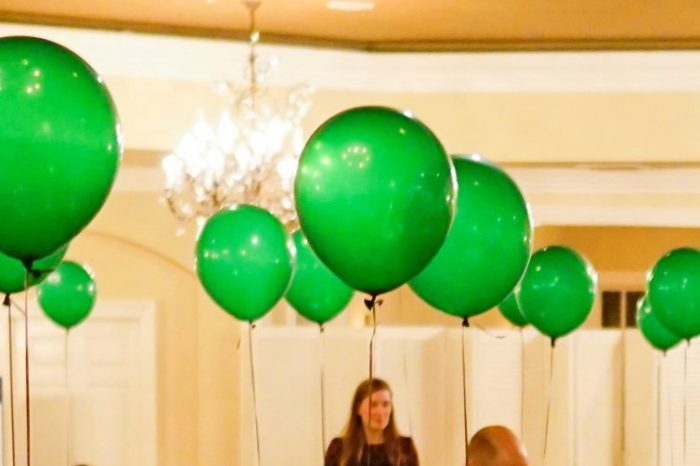 Plans Announced For The Stickley Weekend on October 13-14