John Bryan was a philanthropist, CEO, “fundraiser-in-chief,” a fervent supporter of the arts, and the man behind the creation of Chicago’s Millenium Park, but to those that knew him and worked with him, he was more than a man with an impressive CV. The qualities that made him a leader early on in business shone through in his passion for the arts, both in his beloved Chicago and elsewhere collaborating with others. Bryan, a man of passion, brilliance, and grace, died of complications from lung cancer on Oct. 1 at Rush University Medical Center in Chicago, Illinois, according to his son, John Bryan III.

Bryan was born and raised in West Point, Mississippi and lived in Lake Bluff. In his youth, Bryan earned a bachelor’s degree from Rhodes College in Memphis in 1958. After college, he began graduate business studies at the University of Virginia, but went to work at his father’s suggestion. He joined the family specialty meat business, Bryan Foods, at age 23 in 1960 as its top manager, later finishing graduate school part time at nearby Mississippi State University. The family business would soon be sold to Chicago’s Consolidated Foods, but Bryan stayed on to look out for the business. He soon became president and a year later CEO – and under his leadership, changed the company’s name to Sara Lee.

During his time as CEO, he began to support local art groups in Chicago. “I think I was born with a natural attraction to the arts,” Bryan said in a 2004 interview with the Chicago Tribune. “I’ve always made aesthetic judgments. And I’ve developed a fascination with art, architecture and design.” His fascination with the arts would span all throughout his life as he continued to find art projects that he enjoyed and believed in supporting. He would also become politically active and supported progressive causes and figures in the Democratic Party. Hillary Clinton received on her 50th birthday as First Lady in 1997  a 300-pound pumpkin spice and cream cheese-filled cake from Sara Lee.

“John truly was the epitome of a Renaissance man, enormously talented and engaged in every aspect of life: business, the cultural landscape, art, architecture and design, civic engagement, politics, historic preservation and of course his beloved Crab Tree Farm,” Chicago attorney Joseph Gromacki, a close friend, told the Tribune.

“On my visits to Crab Tree Farm, I came to see it as an extension of him—both awe-inspiring and welcoming. Mr. Bryan was gracious, brilliant, charming, thoughtful, and warm and so was his home.” – Vonda Givens, Executive Director of the Stickley Museum at Craftsman Farms

Crab Tree Farm is a privately owned property with a functioning farm, purchased by Bryan in 1985. The six farm buildings display collections, some of which have been created to reflect the aesthetics of the Arts and Crafts movement, including artifacts from both the English and the American movements. The decoration of the rooms was something Bryan insisted on working on himself, a reflection of his ability to immerse himself in researching a culture. “When someone originally suggested that he fill the house with Arts & Crafts, he said ‘what’s that?’” reflected Tom Gleason, the collections manager of Crab Tree Farms. “He fully immersed himself in research about the Arts & Crafts period, the stories, the people, everything…He always said he was a set designer here, putting things together to scale and size.”

Those who are familiar with his philanthropy and passion most likely remember him telling folks “Don’t ask me to raise money to fix the roof … It has to be something that’s exciting. Like they say, it takes some magic to stir people’s blood.” Gleason also revealed that “He found joy and passion in collecting Arts and Crafts objects and he was just as passionate with scholarship and connoisseurship.”

He fully immersed himself in research about the Arts & Crafts period, the stories, the people, everything” – Tom Gleason, Collections Manager at Crab Tree Farms

Of course, no tribute to John Bryan would be complete without talking about Millenium Park. “Without John, there would be no Millennium Park,” Chicago lawyer and former FCC chairman Newton Minow, a longtime friend and co-boardmember told the Tribune.  “He was an exceptional combination of a fine mind plus a dedication to making our community and our country a better place. And he was more than a business leader — he took an active role in the direction of our country in the arts.” What is known to be his grandest civic undertaking was being the sole force behind raising $200 million in private funds to help pay for the $475 million Millennium Park – now a a state-of-the-art collection of architecture, landscape design and art that provide the backdrop for hundreds of free cultural programs including concerts, exhibitions, tours, and family activities in Chicago. “He helped shape it, found the money to fund it, found the artists and talent to put it together, oversaw every part of its creation, and, finally, delighted in seeing the transformation and watching Chicagoans enjoy it,” said Barbara Fuldner, board member of the Stickley Museum of Craftsman Farms. Bryan strove to build something that helped put Chicago on the Art world map. “My point from the beginning was that we want to do something that would define Chicago to the world,” Bryan said. “We wanted to build a free park for the people of the city. We wanted the best designers, architects and artists the world has to offer.”

Millenium Park, Chicago, IL. John Bryan was the sole force in raising $200 million to build the park as a defining arts and culture portal. Picture courtesy of Wikipedia.

“My point from the beginning was that we want to do something that would define Chicago to the world.” – John Bryan

Those in the Arts and Crafts community today fondly remember him as a visionary, creative, and giving person. Fuldner, who had the opportunity to collaborate with Bryan, saw in Bryan a passionate supporter who was eager to keep working. “Early on, he recognized Gustav Stickley’s importance as a visionary leader of the Arts and Crafts movement in America. John understood the significance of saving Craftsman Farms for the benefit of us here today. He supported the Farms with his knowledge, vision, and generosity.” Bryan suggested to Fuldner that the two of them display their Newcomb collections together at Crab Tree Farms. “This was an honor for me, and a very special experience, to plan it with him! The exhibition, arranged mostly by Mr. Bryan, is beautiful. Though he did see the exhibition completed, his cancer diagnosis came right at the time of the opening. The exhibition has gone on as planned and many have enjoyed it, but sadly I never saw John Bryan again.”

The pieces from his collection have been displayed at the National Arts and Crafts Conference at the Grove Park Inn within the Stickley Museum at Craftsman Farms’ “Mr. Stickley” case displays since 2008 – a cause that Bryan would “always happy to share pieces from his collection for these displays. As several others, who knew him and/or worked with him, have expressed this past week: ‘We were all lucky to have known him.”‘

Early on, he recognized Gustav Stickley’s importance as a visionary leader… John understood the significance of saving Craftsman Farms for the benefit of us here today. – Barbara Fuldner, Stickley Museum at Craftsman Farms

Vonda Givens, Exceutive Director of the Stickley Museum at Craftsman Farms, says “Throughout the entire modern history of Craftsman Farms, from the 1980s to the present, John Bryan championed the preservation of Craftsman Farms and its development as a museum. In large and small ways, with occasional grand style and as often quiet gestures, he consistently played an instrumental role in the museum’s most important endeavors. We are indebted to him for his leadership and his generosity, of both spirit and resources, which laid a solid foundation for the museum’s longevity and current vitality.”  In describing Bryan’s brilliance, charm, warmth, and graciousness, Givens can’t help but remember this quote from Henry David Thoreau’s Walden:

In addition to his son, Bryan is survived by his wife of 60 years, Neville; two daughters, Margaret Bryan French and Elizabeth Bryan Seebeck; another son, Charles; 13 grandchildren; one great-grandson; a brother, George; and a sister, Caroline Harrell.

A memorial service will take place on Saturday, Nov. 3 at the Art Institute of Chicago.

To learn more about Crab Tree Farms, John Bryan’s tribute to the American and English Arts and Crafts movement, visit their website at http://www.crabtreefarm.org 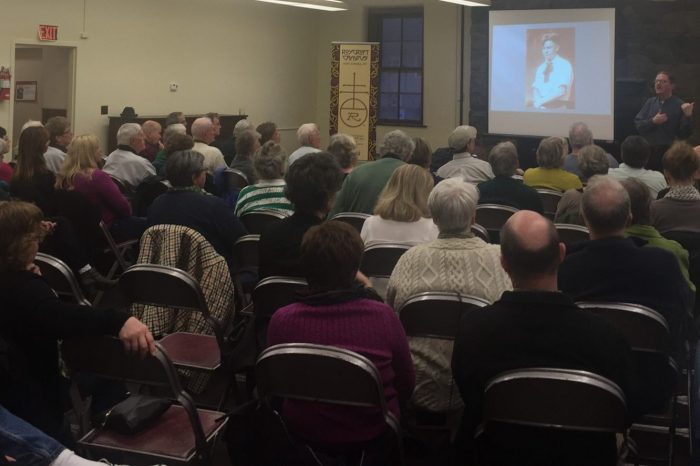