Remembered By Friends: The Passing of Don Magner

Legendary Arts and Crafts antiques dealer Don Magner passed away in his Brooklyn home a few weeks ago. While his name may be unfamiliar to a new generation of collectors, Don Magner was the first antiques dealer in New York City to bring the work of Gustav Stickley, Charles Rohlfs and the Roycrofters to the attention of the press and the public. Drawing upon his own design and artistic experience, Don recognized the importance of the Arts and Crafts movement long before it became widely popular. During a career that spanned five decades, Don remained dedicated to the Arts and Crafts style, and encouraged others to follow in his path. Here, then, are a few select memories submitted by his friends and colleagues, which we are delighted to share with you.

“Walking into his home and warehouse in Brooklyn was another world back in the day when I worked for Skinner Inc. Auctioneers. Important Stickley lighting on Rohlfs chairs, inlaid furniture with Austrian metalwork, odd modern European textiles, etc. Don was light years ahead of any scholarly museum show or publication which would recognize and validate his revelations. His knowledge was immense, his curiosity deep. He and his enduring friendship with Kenny Dukoff produced many fabulous stories about pursuits and acquisitions worthy of any novel. The last time I saw him, Don was attending the opening of the Gustav Stickley exhibition sponsored by the Dallas Museum at the Newark Museum. Last time I heard from him, he had left a message on my answering machine informing me about the death of Robert Edwards. We owe this pioneer in 19th and 20th century design our thanks for his dogged research and generosity in sharing his knowledge, often presented in a captivating narrative. Don sparked intrigue in many a budding dealer and curator who built on his discoveries and carry on his legacy today. Rest in Peace.” – Marilee Boyd Meyer

“I was sorry to hear of Don Magner’s passing. He was a very gifted picker and dealer with a remarkable eye. In the mid-1970s he would routinely have Stickley, Rohlfs, and Roycroft furniture in his Brooklyn shop, but also, for instance, Eames chairs, at a time when almost no one knew of Arts and Crafts and few people were thinking about “Mid-Century Modern.” He was indefatigable; on those rare occasions when, for instance, a worthwhile piece of Stickley surfaced, it would often be at a midweek country auction far from the city, but Don would be there. He must have driven countless miles and he found some great things. It’s hard to capture his personality. He had an eccentric charm, his conversational style was intimate and personal and the things he said often gave the impression he was letting you in on a great story — and he sometimes was — but his nature was also challenging and competitive. There was not much casual chatter; a conversation felt like a test; I always liked talking to him. I lost track of Don by the late 1970s, but we met again six years ago at the opening of the Dallas Museum’s Stickley show. He had mellowed but was essentially unchanged. It was a delight to see him.” – David Cathers

“As an early pioneer in the world of Arts and Crafts, Don showed an keen eye and the importance of specifics designs. He was very opinionated on his feelings and dedicated to the preservation of the craft. His space in Brooklyn was quite a treat to visit, as you never knew what you’d find. It was always a learning experience.” – Don Treadway

“I remember how exciting it was to take the subway to Brooklyn Heights to meet with Don. You never knew what treasures he might show you. Don was one of the first dealers in the field that I met, and getting to know him was special. He always had fantastic stories to tell! I learned a lot from him, he was always very generous with information. I have vivid memories of searching through his storage garage, his shop…but nothing could have prepared me for the first time he invited me to his home. A feast for the eyes! And that unmistakable voice of his! Don was a seminal figure as a dealer in our field, and I will always remember him fondly.” – Robert Kaplan

“Those who were fortunate enough to know Don Magner beyond his occasionally cantankerous facade had the privilege of sharing time with an articulate, intelligent, and self-aware fellow being. Don was all about heart, and his understanding of 20th century design was so beyond the more typical, formulaic, “But I have an early version of the 222 settle” approach that predominated during the first decades of the revival of interest in the Arts and Crafts. This was a man who had the kindness of a romantic, the knowledge of a scholar, and the wisdom of a sage. His loss is our loss.” – David Rago

“Don Magner was one of the great dealers, and was the first Arts and Crafts dealer actively selling in the 1960s, before anyone could even name the style. The first Arts and Crafts galleries all bought inventory from him. Few people know that Don was not only a gifted painter, exhibiting in Manhattan, but also a natural dramatist and storyteller who was a scriptwriter in the film industry. Anyone who has experienced the pleasure of Don’s colorful company, his artistry, his ability to entertain, and his intellect, should be delighted – but not surprised- at his life in the celebrity world of film.” – Jeffrey Preston and Judith Budwig (Redux: The Arts and Crafts revival, 1972-2012)

“I think he had a great eye, tremendous knowledge and the ability to aggressively pursue the things he wanted. At Brimfield he was known to shout over the crowd waiting for a piece at the back of a truck in order to get a price, irrespective of who was in front of him…He was a force.” – Jim Messineo

“It was the summer of 1983 and I was attending an auction in Fayetteville NY. It was at an old estate and they were selling right off the back porch. The tent was packed with people. It was a Victorian home with much of the original furnishings throughout the house. There was one room that was an exception, the library. This was done in the Arts and Crafts style and many of the pieces were by Gustav Stickley. I happened to be at my van when another van pulled in beside me. An older, 50-something man stepped out and came around to get his two dogs, as Don often traveled with his dogs. We introduced ourselves and went on our way. Later at the auction, I realized we were bidding against each other. At the close of the auction Don was in line with me as we were cashing out. He took it upon himself to explain the fuming process to me and told me how fragile the finish and color could be and that I should be very careful when packing. I smiled and agreed. We had been friends ever since. Don will be missed.” – David Rudd

Bruce Johnson has also shared his memories of Don in the following Little Journeys column.

Photo of Marilee Meyer and Barbara Fuldner talking with Don Magner, accompanied by Tim Gleason and Monique Hoogenboom Seibert at the Stickley Exhibition. 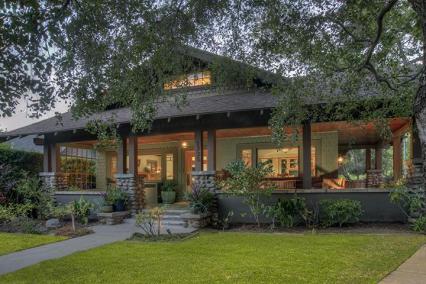 A Silver Anniversary for Pasadena Heritage