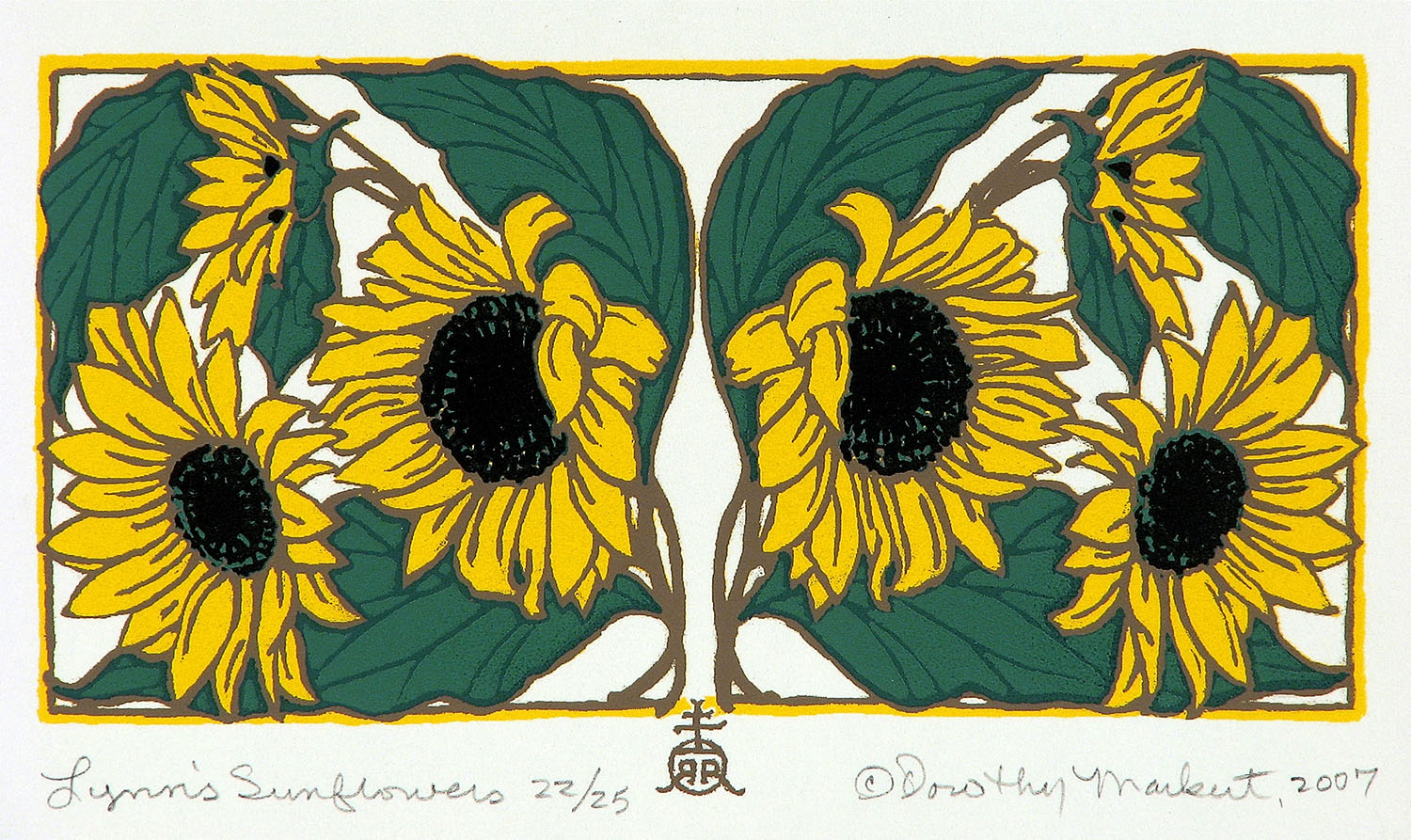 Dorothy J. Markert, an artist, author, and Roycroft master artisan emeritus, was known for creating Arts and Crafts-style silkscreen prints – but to some, she was so much more. “Dorothy was a quiet person with a gentle voice, who did not crave the limelight. You might not notice her in a crowd right away, but once you met her, you would be struck by her kindness, wit and wisdom,” says printmaker Laura Wilder. Wilder and Markert – bonded over a love of printmaking – describes an “epic road trip together”, in which a true and lasting friendship was born. “I drove, she rode shotgun. I told endless stories of my search for Mr. Right; she listened patiently and offered witty remarks and the occasional anecdote. She wasn’t one to talk a lot, but when she did, it was always interesting.” Wilder would deliver this same story during Markert’s memorial August 5th.

“Dorothy was a quiet person with a gentle voice, who did not crave the limelight. You might not notice her in a crowd right away, but once you met her, you would be struck by her kindness, wit and wisdom.” – Laura Wilder

A lifelong artist and the master of silkscreen printing, Dorothy Markert passed away July 27th in her apartment at Fox Run Orchard Park in Hamburg, New York at the age of 86. She was cared for by her daughter, Grace Brandt, with assistance from Hospice Buffalo.

Born in Kearny, New Jersey in 1932 to Wilbur James Harvey, an engineer at General Electric and Clara Eleanor (nee Mattson) a needleworker and painter, she was the middle child of 3 children and spent her childhood developing her artistic skill early. After graduating high school and the Traphagen School of Design in New York City in 1952, Dorothy Harvey worked briefly as an artist for American Girl Magazine and as a window designer in Ithaca, New York. Later, she acquired a job at Bell Labs as a technical illustrator – where she met John Phillip Markert, an electrical engineer. John and Dorothy married in August of 1954 in Arlington, New Jersey – they settled into a home and began an active life in the community of Hamburg, New York. Her involvement in the local PTA turned into her first self-taught lesson in silkscreen printmaking.

Markert taught herself lessons from a book on printmaking and due to a request from the local PTA, began to produce posters. She continued printmaking – and soon began using her house as a studio and art gallery. She developed a specialty in silkscreen prints of Arts and Crafts stylized flowers in art pottery – and would later become known for them. Markert became a frequent exhibitor at shows and taught adult education courses on drawing and painting and at the Chautauqua Institution. In 1997, she had achieved the title of Roycroft Master Artisan – after after two years in the minors. Dorothy had found in screen printing her artistic voice and in her artists’ statement, any artist could recognize that passion for her craft. “I find screen printing a very personal way to create art. The craft, the hands on work is every bit as important and satisfying as the aesthetic vision. There is always something new to discover, whenever I am creating my own work or teaching.” 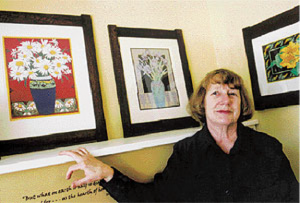 She was a maker in many different formats including pottery, copper enameled jewelry and fiber arts. She helped to create the Centennial Art Center, became an active member of the Hamburg Historical Society and Hamburg Art Society. Because of her voracious reading, she became a trustee of the Hamburg Library. In 2015, she retired from work and was named master artist emeritus by the Roycrofters-At-Large-Association. She was a life member of RALA and would always continue to be in touch with and support the organization. Thomas Pafk knew her from working with her on the RALA Artisan Jury and made some frames for her. When asked about Markert, Pafk immediately commented “She was an amazing person as well as a great artist and printmaker.” 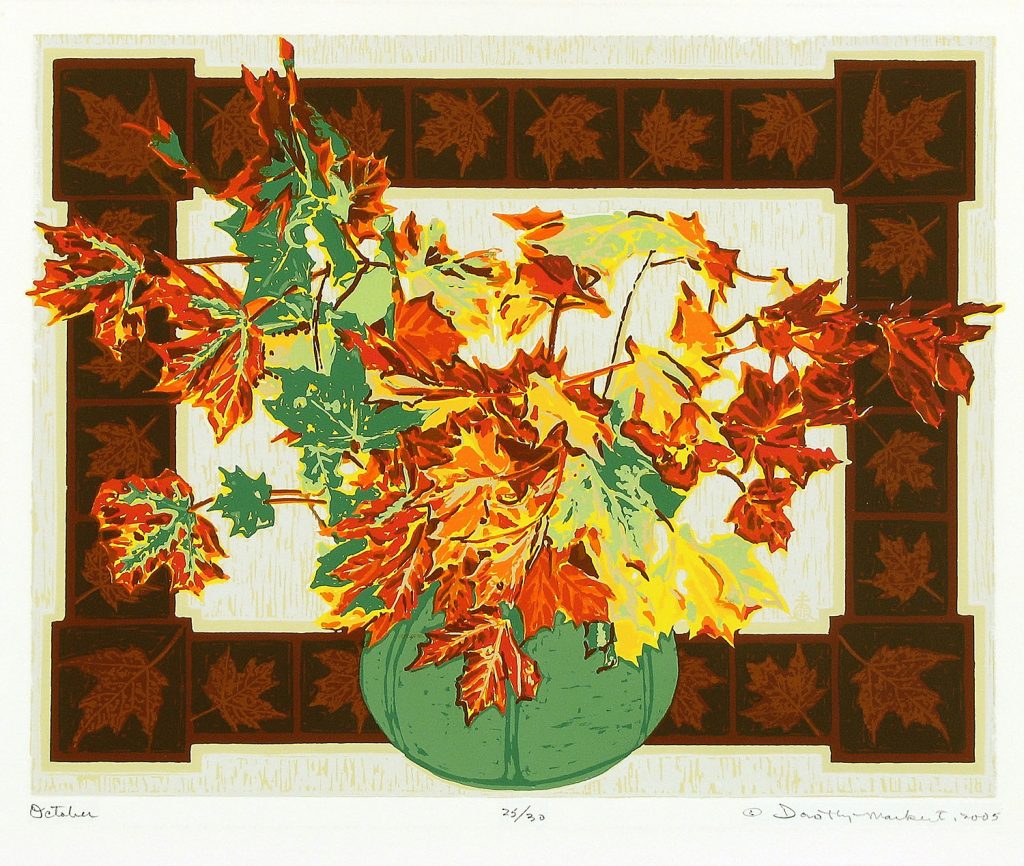 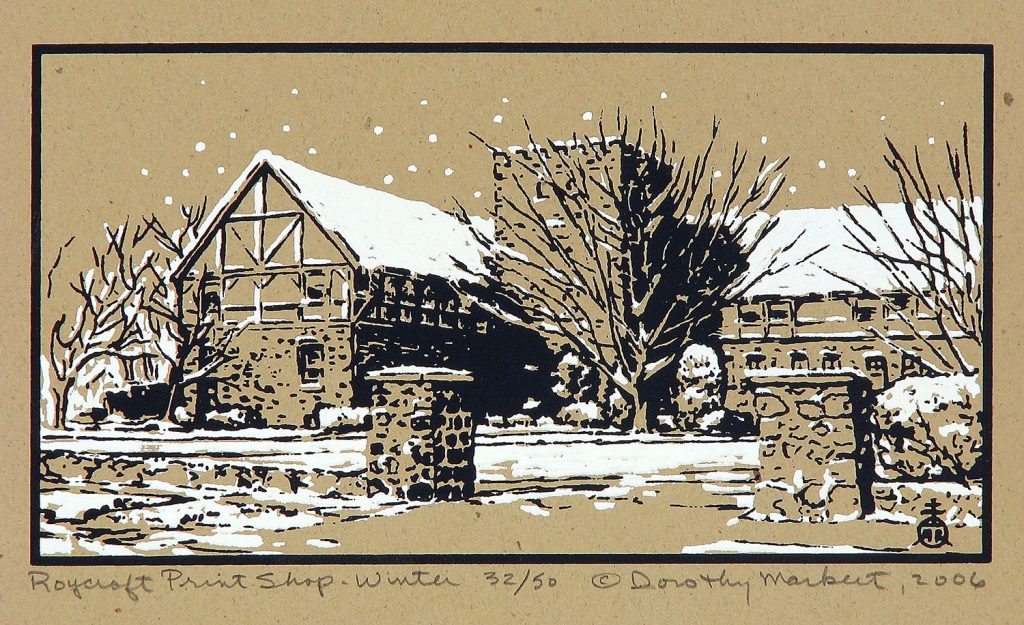 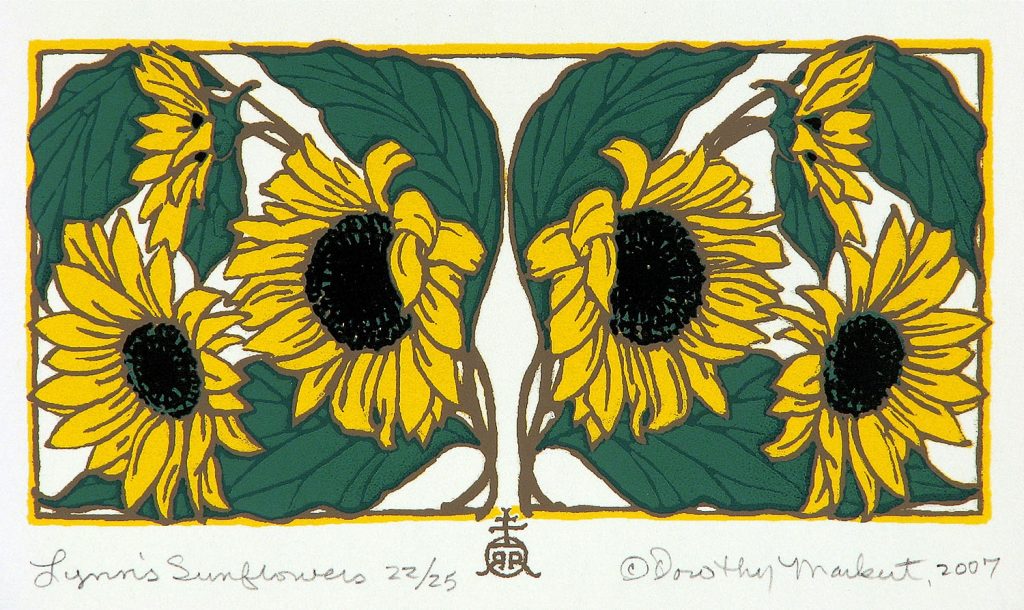 “I find screen printing a very personal way to create art. The craft, the hands on work is every bit as important and satisfying as the aesthetic vision. There is always something new to discover, whenever I am creating my own work or teaching.” – Dorothy Markert

In her creative life, she made friends in the Arts and Crafts community and even collaborated with a few, including her friend Laura Wilder. “She and I once had much fun doing a collaborative print together. I designed a portrait of her making a screen print, and added ‘The Printmaker’ lettering,” said Wilder. “Dorothy designed the floral Arts & Crafts style floral border around it, and printed the edition in four or five colors. We both signed it, and stamped it with our RR mark. The prints sold well, even to people who didn’t know either of us.” 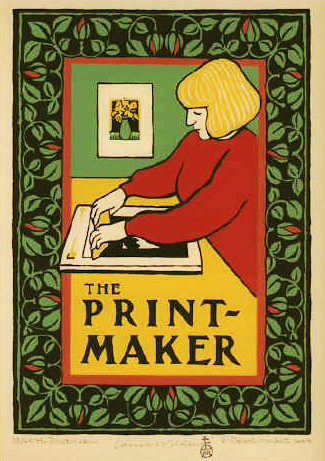 “The Print-maker” by Laura Wilder and Dorothy Markert

She is survived by her daughter and sons Phillip J., Kenneth R., and Thomas J. Markert; her sister Virginia Garces; and eight grandchildren.

In lieu of flowers, memorials may be made to The Centennial Art Center, 3185 Amsdell Road, Hamburg, New York 14075. 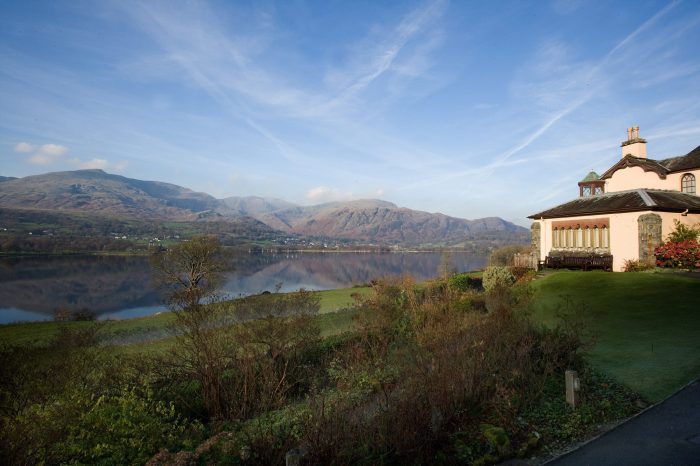 From Morris to Mackintosh: A Frank Lloyd Wright Trust Tour Across the Pond